The Semmelweis Budapest Award was presented for the second time at a ceremony held on October 28. This year, the University’s highest scientific honour was bestowed upon Professor Sir George Radda, the Hungarian-born father of MRI examinations. The ceremony was attended by numerous University leaders, as well as Dr. József Pálinkás, president of the Hungarian Academy of Sciences.

In his laudation, Rector Tivadar Tulassay stated how Sir George Radda realised early on that “we are living in a rapidly changing world, where the most powerful dominance is knowledge, and where knowledge and information equals power. This means that the only possible way to overcome all the dilemmas and challenges of the modern age is to create a knowledge-driven society and a knowledge-based economy.” Professor Radda has recognised that the new strategy in science must be “to improve the quality of life and health status of citizens by boosting the innovative capacity of health-related industry and defeating emerging epidemics,” he said.

At the award ceremony, Sir George Radda related that it is an especial honour to receive recognition from an institution which holds the prestigious “Research University” title. “I have been coming to Semmelweis University on an almost annual basis for the last eight or ten years and have even given some lecture courses. In fact, I regard Semmelweis as my second university after Oxford, and it is very nice to have an award from by home base,” he added.

Professor Radda spoke about the dramatic transformation that science and the biomedical sciences have undergone over the last twenty years. He was greatly impacted by the observation of Nobel laureate Philip Sharp, that the next step for science must be the integration of different disciplines. This is what Professor Radda also sees as the future: “We now have huge amounts of information about genes, the content of cells, living tissues, the whole physiology, but unless we can integrate all that information, we are never really going to understand life.” He considers it essential for the different disciplines to not only work, but think together, and to cooperate as a single entity. “Converging the sciences into one new type of science is what I believe this century is going to bring,” he concluded.

A ceremonial symposium organised on the occasion of the presentation of the Semmelweis Budapest Award commenced immediately after the award ceremony. Entitled Frontiers of Biomedical Imaging: From Molecules to Man, the symposium featured lectures about some of the most modern bioimaging procedures. Professor Jeremy K. Nicholson (Imperial College London), the recipient of last year’s Semmelweis Budapest Award, was among the presenters.

Vice-Rector for Science, Innovation and International Affairs Miklós Kellermayer stated that the Semmelweis Budapest Award represents the University’s commitment to quality. Beyond recognising Professor Radda’s scientific achievements, Professor Kellermayer considers it important that, as a returning guest, Sir George induces the University’s leadership to think strategically. “We have seized on several ideas which came out of our joint discussions, such as the ‘From Molecules to Man’ strategy,” he added.

The Vice-Rector evoked Professor Radda’s perspective on what the research centre of the future must be like. The professor doubts that research in the 21st century can be successful if the work is performed by isolated groups and, perhaps, towards slightly self-serving goals and interests. He drew attention to the fact that, while performing very important work, 95 percent of researchers are not geniuses. As such, the organisation of research work should not be entrusted to isolated groups, but would be much more effective if organised by an interdisciplinary research community. This concept has occupied Semmelweis University’s leadership as well, who are seeking to assist the University’s research community within the framework of a similar strategy, Professor Kellermayer related.

Initiated by Rector Tivadar Tulassay, the Semmelweis Budapest Award was established in 2009 by the University’s Senate. It recognises the achievements of an international researcher working in the field of medical biology, whose research activities have produced internationally acknowledged results, and whose work contributes significantly towards our understanding of living natural science, and the benefit of humankind. The award consists of a certificate and a monetary prize in the amount of €10,000. 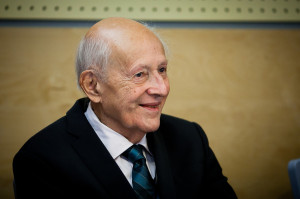