“I work as a caretaker at several departments of the university but my favourite building is the one in Tömő street.”, said Zoltán Tóth.

Over the six years he has been working here he has witnessed several changes, such as various departments moving in and out. Currently the building is home to the Oncology Centre and the Department of Pulmonology.

The clinical block has also been the venue of numerous film productions that Zoltán Tóth personally overlooked and supervised.

“I am always excited to be part of these events, it is really interesting to see how the building can be altered. Recently, some scenes of a popular Hungarian series were filmed here, when the building was turned into a police station. Once, I was even asked to play a minor role in one of the films.”, he recalled. 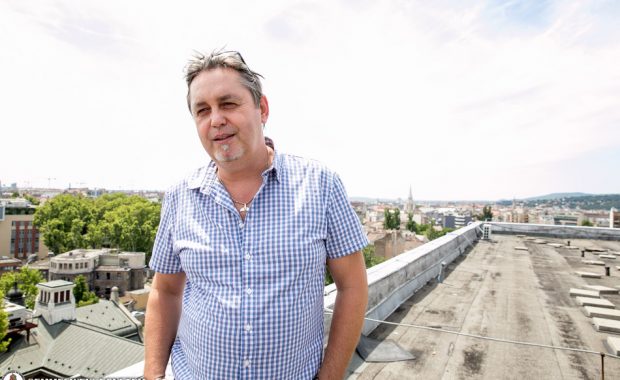 As a caretaker, he knows every nook and cranny of the building and his favourite places are the fitting shop and the roof, which overlooks the entire Outer Clinical Block and the Botanical Garden. He often comes up here to admire the view, and few years ago he watched the partial solar eclipse from here.

When Zoltán Tóth started to work here as a caretaker six years ago, it was a career change for him, as previously he had worked with computer networks. His tasks include the general maintenance of the whole building, setting up sound systems in the lecture halls and managing projectors.

“It is my job to ensure that everything works.”, he said

Apart from the building in Tömő street, he also works at the 1st Department of Internal Medicine.