“I look upon this room as the keepsake of the past and a gate to the future at the same time.”, said Dr. Szabolcs Béni at the NMR Laboratory of the Faculty of Pharmaceutical Sciences, who as a PhD student supervised its installation under the leadership of Professor Béla Noszál.

The laboratory used to be a boiler room, therefore it had to be completely refurbished: electricity and internet, heating, ventilation and air conditioning had to be built in.

“This is the world’s smallest laboratory with such an immense magnet stationed in it. The first spectrometer of 600 MHz in Hungary was installed in this laboratory in 2004.”, Dr. Béni pointed out.

The results achieved with the help of the device account for nearly half of the Faculty’s scientific performance. The nuclear magnetic resonance (NMR) spectrometer is used for structure research, which is the study of molecule structures and molecular interactions. The structure of numerous chemical entities have been identified and new compounds playing important roles in drug transport have been developed in the laboratory. 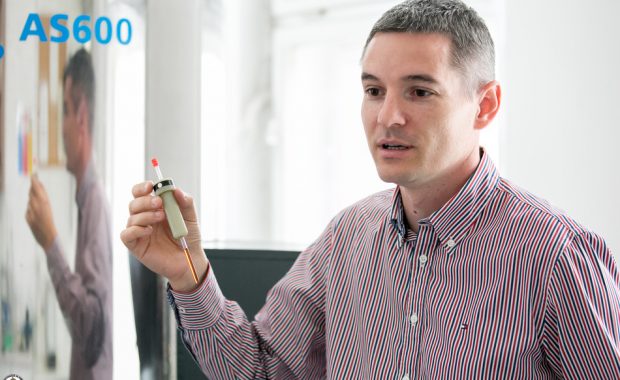 “One of my dearest memories is when this enormous superconductor magnet was being excited by charging it with energy. The service engineer and I were supervising the process together, which took at least 34 hours. We spent the whole night here, but I enjoyed every moment of it.”, he said.

He spent not only evenings but weekends at the laboratory studying how the device could be used for structure research. His knowledge gained at the laboratory was of great asset to him as a postdoctoral fellow of structural research at the University of California.

Another memorable event was the inauguration ceremony of the laboratory, which was attended by Richard R. Ernst, winner of the Nobel Prize in 1991 for his methodological developments of nuclear magnetic resonance.

“I still have the champagne glass that I and Richard R. Ernst toasted with 15 years ago; that was the moment when I realized how great the responsibility was for someone who owned such a magnet.”, he said.

Dr. Szabolcs Béni was head of the laboratory for six years. As deputy dean and head of a departmental group, he does not have much time to spend here, however, he mentors his PhD student here every Friday. Currently, he is also working on a new project aiming to establish a new NMR laboratory, which would create a great opportunity for the university to possess an NMR spectrometer that would take the lead in the region.