“I am very proud to have taken part in a project of such high priority.”, said Dr. Ágnes Kazai, advisor to the Directorate of Innovation at the Simulation Centre in Ernő street.

The establishment of the educational centre, which took three years, has had a great impact on many aspects of her life: it was her first project application that she worked with after starting her new job at the university, and she also learnt a lot about the university, medicine and cooperation with related professions.

“As the result of the project, simulation lessons were introduced in the curriculum of medical education for the first time in Hungary at Semmelweis University. These lessons provide hands on knowledge by practicing on real life scenarios”, she said.

The adult and children patient simulation mannequins of the Simulation Centre show realistic symptoms, thus students can practice in lifelike situations. The vital signs of the dummies are regulated by faculty members from an adjacent control room, the lessons are filmed and subsequently analyzed as a follow-up. 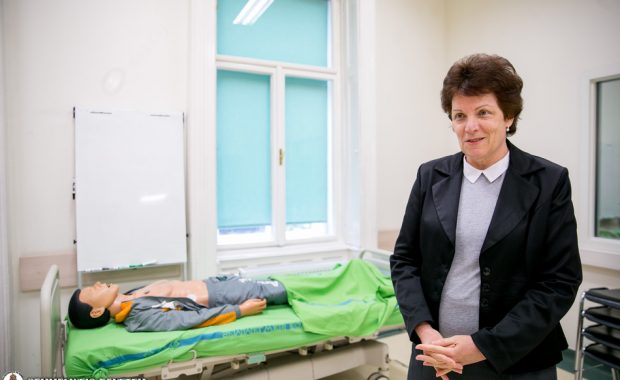 Dr. Ágnes Kazai has not been at the Simulation Centre since the completion of the project, still she is touched by the “everlasting charm” of the place. During the three years of the project, she was involved in the entire process, from writing the tender to signing the contract and realizing it. She spent a lot of time in the building home to the Simulation Centre, which was also a unique aspect of the job.

“Previously, I mainly had theoretical assignments, but this project had a tangible result. It makes me feel good to know that we created something longstanding as a result of teamwork and which also greatly contributes to the development of medical education in Hungary.”, she said.

Dr. Ágnes Kazai worked for the university as an external consultant between 2006 and 2010 and became the deputy director of Semmewleis Tender and Innovation Centre Ltd. in 2010. For six months, she was acting director of the Innovation Centre set up in 2013 and currently she is the advisor to the Directorate of Innovation.

In our article series entitled “My University”, we ask university citizens to show their favorite university location, and discuss its importance to them. These articles are a part of the celebration of Semmelweis University’s 250th anniversary year.