“Perhaps the most unique plant of the garden is the dawn redwood that was about 2 metres tall when I planted it eight years ago. Now it is as tall as its neighbour, a 40-50-year-old birch,” said the gardener of the university.

Károly Soós has been working in the garden of the Central Directorate since 1998, therefore he knows all the plants, buildings and artifacts inside out. The oldest relic of the garden, located by the side of the Directorate of Finance, is a fragment of a wall and a gate post from the 19th century that was used to tie horses to.

“I’m very interested in the history of the garden, so I often visit the Central Archive looking for old documents,” said Károly Soós.

The current structure of the garden of the Central Directorate was designed at the end of the 19th century and the beginning of the 20th century based on the English garden style. 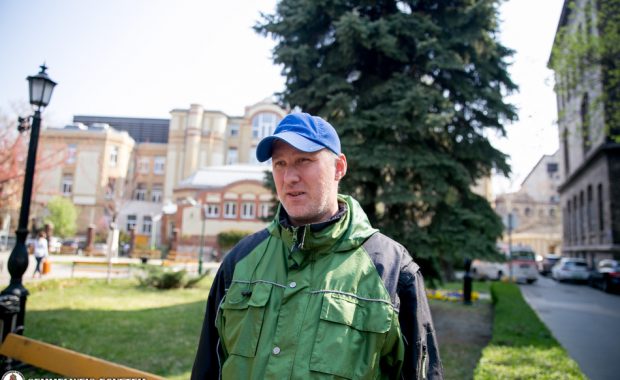 Walking around in the garden, Károly Soós stopped for a long time pondering over a horse chestnut tree, which is as old as the university’s buildings, thus one of the oldest trees along with a plane tree and a yew, planted in 1878.

“I love working here, especially in the spring when everything turns green and trees are in full bloom. This is the time when the pink blossoms of crab apples and Japanese cherries render the garden a unique spot. However, the colour of the flowers depend on the amount of rain and sunshine. Another pleasant sight is the Japanese maple with its bright red leaves in the autumn,” he said.

Károly Soós has been the gardener of Semmelweis University for 23 years and considers his job a value creating activity, as his task is to enhance and improve the environment. Apart from gardening, he is responsible for the maintenance of garden furniture, cleaning paths and doing communal waste compaction. His team is also in charge of the maintenance of the University’s holiday facilities.

In our article series entitled “My University”, we ask university citizens to show their favorite university location, and discuss its importance to them. These articles are a part of the celebration of Semmelweis University’s  250th anniversary year.