Number of vaccines administered at Semmelweis University - 07. August 2022
More information
The ELKH-SE Paediatrics and Nephrology Research Group at Semmelweis University’s 1st Department of Paediatrics won the institution’s Innovation Award in the “most innovative research work” category, which could contribute to the development of a new type of anti-inflammatory and anti-tissue scarring drug. In our series of articles on the Innovation Award winners, four members of the research team – Dr. Beáta Szebeni, Dr. Domonkos Pap, Dr. Apor Veres-Székely and Dr. Ádám Vannay – talk about the scientific efforts behind the award, also about their research and personal motivation. Their main goal is to ensure that the results of their work and the improvements they have made are put to use at the patients’ bedsides as soon as possible.

The award-winning research team at Innovation Day 2021 identified a drug in preclinical development that affects the function of the PARK7 molecule, and was the first to discover its anti-inflammatory and anti-scarring effects. Experiments in large-scale cellular and animal models have demonstrated that the drug inhibits inflammatory processes in inflammatory bowel disease and can also reduce lung scarring. The aim of the award-winning research is to take the development to clinical trials, with the prospective to eventually bring it to patients as an anti-scarring drug, members of the research team told our website. The team is made up of experts from different fields (bioengineers, doctors, biologists), so the diversity of approach is a given. 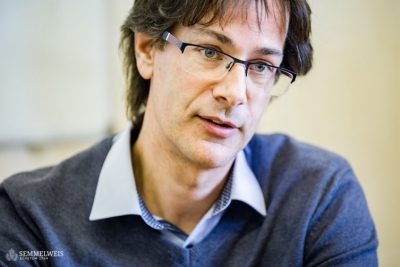 “We have been working together for almost 10 years, so by now, team members complement each other very well,” said Dr. Ádám Vannay, Senior Research Fellow of the Eötvös Loránd Research Network – Semmelweis University (ELKH-SE) Pediatrics and Nephrology Research Group at the 1st Department of Paediatrics. The members of the team all believe that the secret of their success is mutual respect for each other and others, and that they think very much alike about the world, morality, science and work. “Without a common set of values, we would not be able to collaborate,” said Dr. Ádám Vannay, who added that although research is kind of an exhibitionist genre, if these desires are kept in check, the team is born.

In their opinion, an important aspect of efficiency is awareness in the choice of topic, which in their case is the therapy of pathologies associated with scarring. For this, they have built a problem-oriented research infrastructure, with ethical approvals, molecular biology methods, and in vitro assays developed in-house, which enables them to test the role of a molecule/agent in the scarring process in a very efficient way. 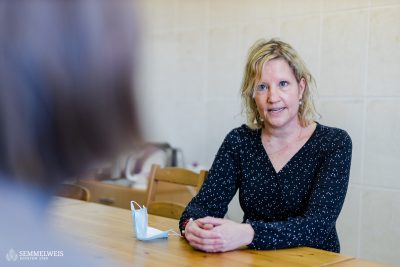 Dr. Beáta Szebeni started working in the research lab in 2007 as a PhD student; now she is a senior research fellow. She wanted to be involved in research that could help sick children: she first worked on inflammatory bowel diseases, which she used for her PhD thesis, and then started to focus on nephrology. She is currently investigating the pathomechanism and possible therapy of scarring as a complication of peritoneal dialysis, a treatment through the peritoneum that replaces the function of the kidney. Commenting on their joint achievements, she said: “Everyone has an important role in the projects. The experiments leading to the award-winning research were carried out together, so individual performance cannot be treated separately, and everyone has different strengths within the group. 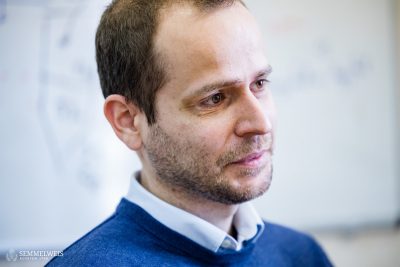 Dr. Domonkos Pap graduated as a biologist and joined the research group as a PhD student, currently working as a senior research fellow. As he explained, in recent years, the research group has developed or established several methods to study tissue scarring, i.e. fibrosis, which can be used to investigate scarring processes in the kidney, intestine, peritoneum and lung effectively. In the research group, decisions on the experimental scheme and method used for each pilot project are taken mutually, which is important because the different approaches complement each other, and it is essential for effective improvements as well,” he said. 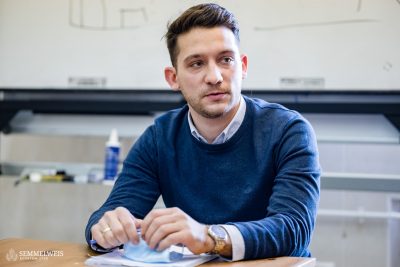 Dr. Apor Veres-Székely, research associate, bioengineer, joined the research group in 2010 as a TDK student. He prefers to focus on methodological developments; currently he is investigating intestinal scarring and inflammatory processes. He emphasized that they work in a well-equipped laboratory. As the mechanism of tissue scarring is universal, in which fibroblasts that produce scar tissue play a key role, their studies could lead to the development of broadly effective anti-fibrotic therapies, he added.

Dr. Ádám Vannay explained scarring, the ’protagonist’ of their research as a general biological process in which the tissue reacts to the damage it has suffered. The aim of the response is to maintain the integrity of the tissue. In some diseases, the damage is long-lasting, such as diabetes or chronic kidney failure. In these cases, the fibroblasts remain active, producing excessive amounts of scar tissue, which, when deposited over time, disrupts the structure of the organ, leading to a loss of function and ultimately to the loss of the organ. Tissue scarring is a very serious health problem, thought to be behind one in two deaths in some form. Twenty years ago, scientists assumed that scarring was irreversible, but today, the view is very different. “However, there is still a lot of work to; for example, there are two approved drugs for the treatment of idiopathic lung scarring, but they have not become a cure-all,” he said.

Dr. Ádám Vannay claimed that their work and results are world-class, at the forefront of fibrosis research. They have been awarded several prestigious prizes, including the Semmelweis Innovation Award twice and the Junior Prima Prize.

Their award-winning project was an international patent application, seeking patent protection for an active substance that affects the function of the PARK7 molecule, inhibiting widespread inflammation and tissue scarring. The patent application and the related business plan for industrial utilization were greatly supported by the Innovation Center of Semmelweis University, the researchers pointed out. 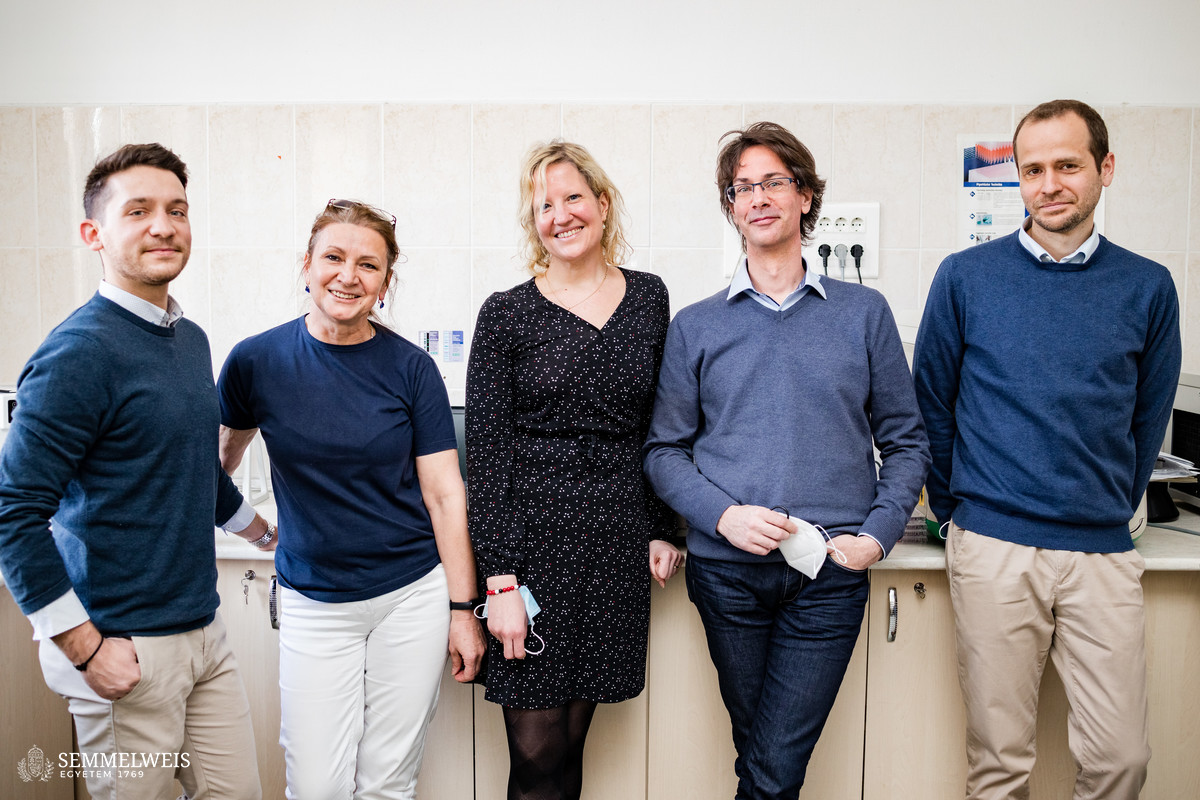 The group’s scientific activity resulted in several prestigious international publications in the last few years, describing the role of PARK7 in inflammatory diseases and the in vitro methodologies they have developed. The recipients of the award stressed that the developments and publications would not have been possible without the generous support of the research team, assistants, PhD students and TDK students. Their goal for the future is to get closer and closer to developing effective antifibrotic agents through their own methodologies, a complex research ecosystem, with the help of such developments. 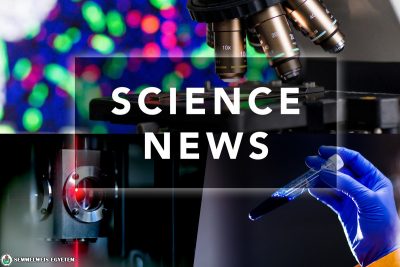 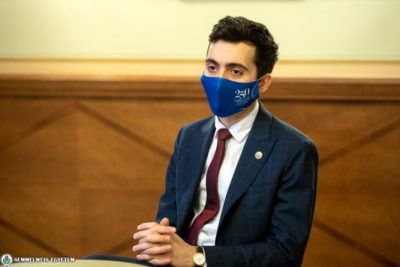 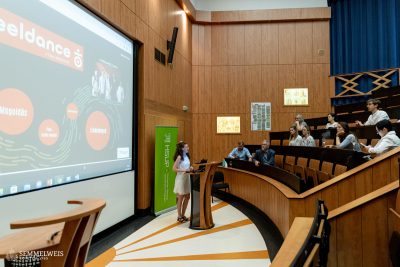 Stand out of the crowd - winning startup ideas from students