Number of vaccines administered at Semmelweis University - 17 January 2022
More information
“Those who commit themselves to medicine and health care are choosing an exceptional profession,” said Rector Dr. Béla Merkely at the opening ceremony of Semmelweis University’s new academic year. Around 3200 first-year students are starting their studies in the 2021/22 academic year at the six faculties, one-third of them in the English and German language programmes. At the opening ceremony, internationally renowned vascular surgeon Dr. Péter Gloviczki received the Semmelweis Budapest Award, and the Rector also presented the Pro Universitate and Outstanding Teacher awards. The ceremony also included the signing of a cooperation agreement between Semmelweis University and the Asklepios Medical School in Hamburg on the further extension of the successful cooperation in the training of German students. 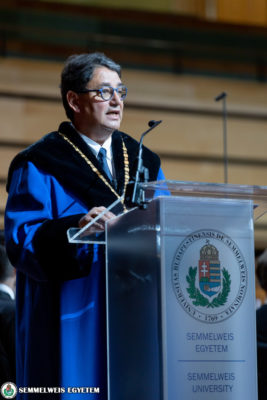 In his speech, Rector Dr. Béla Merkely recalled that the novel coronavirus appeared in Hungary a year and a half ago almost to the day, and Semmelweis University was at the forefront of the fight against the virus from the very beginning, with the participation of both staff and students. “The fact that we are able to return to our traditions and open the 2021/22 academic year in the presence of thousands of first-year students is thanks to the vaccinations,” said the rector. He recalled that the university was one of the first to administer COVID-19 vaccinations on December 26, 2020 and has since become one of the largest vaccination centres in the country, with more than 376,000 vaccines administered. “We have an almost 100% vaccination rate within our university, and our staff and students have set an example to society from the very beginning, taking responsibility for the safety of each other and the patients entrusted to us,” he said. The university has also been a flagship in patient care, with clinics treating around 12,000 inpatients and outpatients related to the coronavirus.

“Those who commit themselves to medicine and health care are choosing an exceptional profession,”

the rector emphasized, addressing the first-year students, also making it clear that training in this field is unthinkable without practical training and exams. He recalled that Semmelweis students, feeling the responsibility of those who choose the medical profession, have been involved in the fight against the pandemic since the beginning, in addition to their studies, with thousands of them being present at the sickbeds, PCR screenings and vaccination centres. In a sense, the participation in the fight against COVID-19 has led to a more intensive in-person education in the field than ever before, made possible by our new, practice-oriented curricular reform, said the rector. He recalled that the practice-oriented curriculum reform, linked to the 250th anniversary of the founding of the university, is based on the view that diseases cannot be understood without the prospective doctor and health professional seeing and feeling the patient and experiencing their complaints with their own eyes. Lajos Markusovszky, a former professor of surgery at the university, recognised this as early as the mid-1800s, which is why his creed became the basic philosophy of curriculum reform. The rector also reminded the new students that no matter how advanced science and modern technology may be, the attention to the patient must not be diminished – this is also what the medical oath is about. 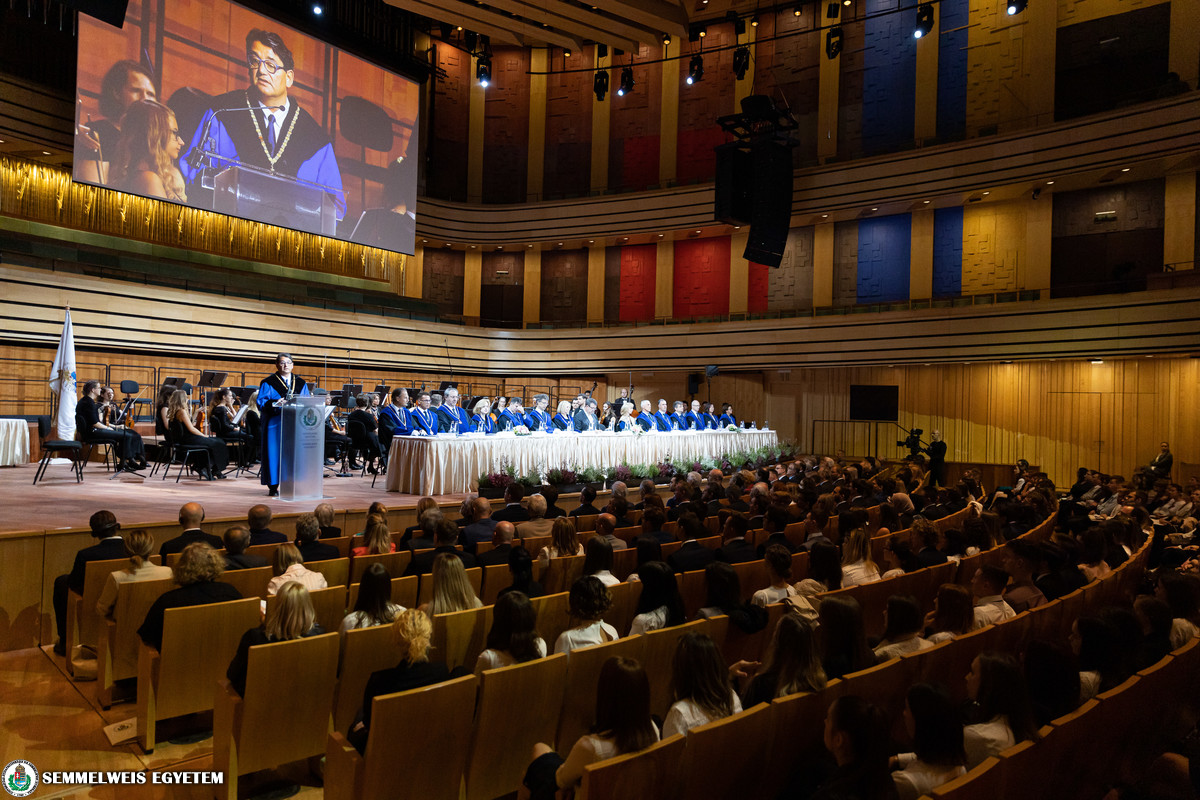 Dr. Béla Merkely also mentioned the change of the university’s operating model implemented on August 1. As he emphasized, Semmelweis University is already the leading medical and health sciences university in Hungary and the region, and the more flexible structure provided by the foundation model will provide the necessary scope for further development. “With the change of model, we have taken on a seven-mile boot, so that we can make even greater strides towards our goal of becoming one of the top 100 universities in the world and one of the top 5 medical universities in Europe”, said the rector. 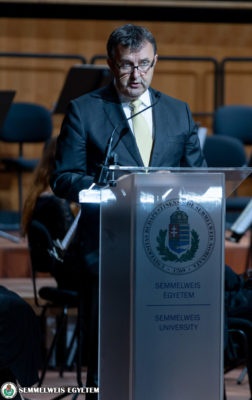 “The more than 250 years of Semmelweis University have enriched us with many things, the institution has always played an important role in the life of Hungary, both in terms of scientific research and international prestige. It is no coincidence that according to some university rankings, it is the best Hungarian higher education institution, offering the most significant and internationally renowned medical and health sciences education not only in the country but also in Central Europe”, said Dr. László Palkovics, Minister for Innovation and Technology, in his speech at the opening ceremony. He pointed out that higher education institutions have an important role to play in achieving Hungary’s strategic goals, and that the country can only become a leader if it has competitive universities like Semmelweis.

The minister said that the current period is unique in the history of education in Hungary, both in terms of the resources available and the volume of development. However, development resources can only be properly used in a suitable operating model, such as the public trust foundation model, which gives universities increased maneuvering room and opportunities. From September this year, more than 180,000 students will start their studies in a model-changing institution, he added. Dr. Palkovics pointed out that the reforms serve both the competitiveness of higher education and the interests of individual universities. Semmelweis will see a number of developments realized over the next 10 years with government support, and by 2030 the university could move up several levels in terms of infrastructure, training and international relations, and even become a leader in supporting the data-based paradigm shift in health care and the health industry.

The minister also praised the role of medical schools in the fight against the pandemic, highlighting the fact that 20% of COVID patients were treated in university clinics, as well as the commitment of students. “Without the staff and students of the medical schools, we would not have been able to act quickly and on time. The response to the pandemic would not have been as successful if we had not been able to count on the university’s participation,” said the minister. 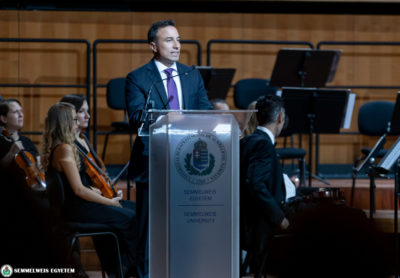 Gábor Orbán, Chairman of the Foundation for National Health Care and Medical Education, which maintains the university after the model change on August 1, and CEO of Richter Gedeon Plc, stressed that the fact that students starting the academic year now will be able to graduate from an extremely prestigious institution at the end of their hard work will not only open up great prospects for their professional careers and increase their personal knowledge, but will also enrich Hungarian intellectual capital. He also pointed out that the pandemic has also significantly enhanced the work of the university, as Semmelweis has been at the forefront of COVID testing, patient care and later vaccinations, and has always played a leading role in communicating with society, which is always very important in a crisis situation. Commenting on the change of model, the chairman said this is an important milestone in building the future, which opens up a unique opportunity for development; it is the duty and responsibility of the Board of Trustees to ensure that the university can make the best use of this opportunity. “We believe that the change of model will provide the right framework and support for the university’s leadership to further improve performance, raise academic standards and achieve the university’s objectives. I am convinced that the greater flexibility and increased management freedom that the model change will bring will give a new impetus to the university’s development and to its involvement in industrial collaborations and world-class research projects,” said the chairman of the Board of Trustees.

The speeches were followed by the first-year students of Semmelweis University taking their oath in three languages: Hungarian, English and German. 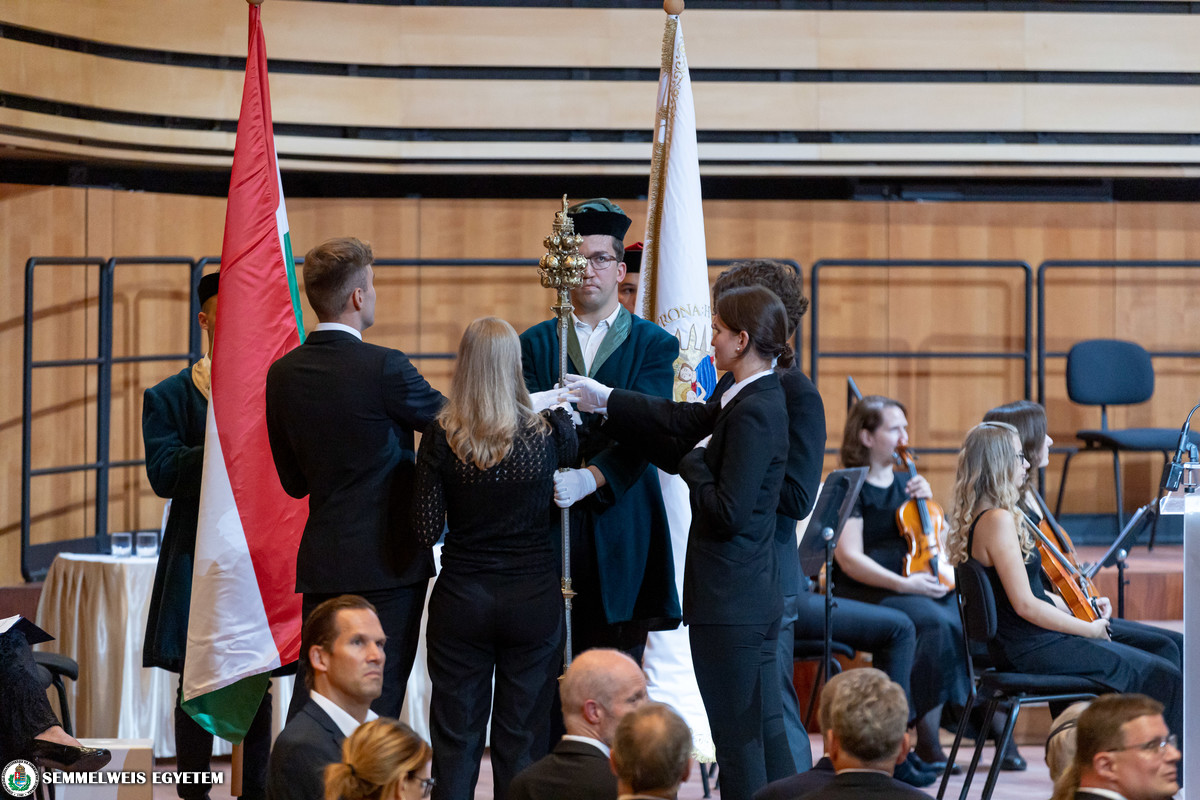 During the opening ceremony, Rector Dr. Béla Merkely presented the prestigious international Semmelweis Budapest Award to Dr. Péter Gloviczki, Professor of Vascular Surgery, Professor and Chair Emeritus of the Mayo Clinic and editor-in-chief of the Journal of Vascular Surgery. Dr. Péter Gloviczki started his career at Semmelweis University and has become an internationally renowned expert in many fields of vascular surgery, and his work has been recognized with numerous awards all over the world, said the rector in his testimonial. Dr. Péter Gloviczki, who is also a member of the Board of Trustees of the Foundation for National Health Care and Medical Education, is the 2020 recipient of the award, which was presented to him only now due to the pandemic situation. 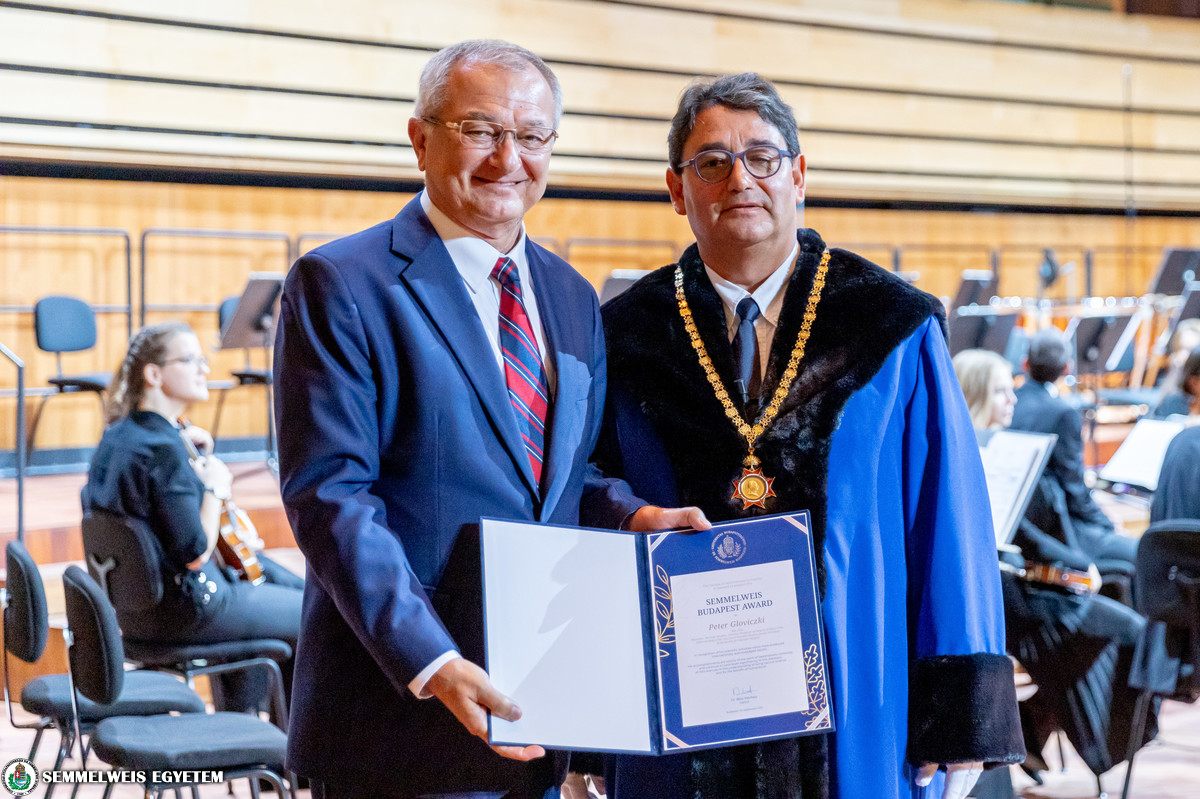 At the opening ceremony, Dr. Zoltán Nagy, professor emeritus, received the Pro Universitate award as the outgoing president of the Semmelweis University Consistory. The rector presented the Pro Universitate Medal to the Water Polo Department of the Semmelweis University Sports Club, which won second place in the water polo competition of the Hungarian University-College National Championship. On behalf of the team, coach Vazul Karácsonyi and center Márk Gémesi received the award. 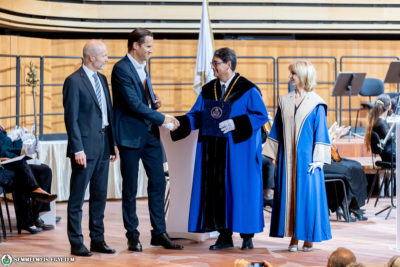 The ceremony marked the signing of a new cooperation agreement between Asklepios Medical School (AMC) and Semmelweis University. The cooperation, which is unique in Europe and was launched in 2008, gives students in the German-language general medical training program at Semmelweis University the opportunity to continue the pre-clinical and clinical part of their training in Hamburg from the third year onwards. At the end of their studies, students will receive a general medical diploma from Semmelweis University, which is recognized in the European Union. The document, in which the parties confirm their intention to continue the successful work beyond 2023, was signed by Dr. Christoph U. Herborn, member of the AMC Board of Directors, Dr. Christoph Jermann, Director of AMC, as well as by Rector Dr. Béla Merkely and Chancellor Dr. Lívia Pavlik. 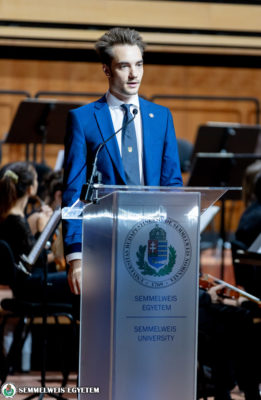 Next, Bálint Tripolszky, President of the Students’ Union of Semmelweis University, welcomed the first-year students. In his speech, he said that the students had chosen to serve the people, making a clear value choice. He also pointed out that the university is both traditional and modern, and is constantly renewing itself. The new students have joined the university at perhaps the most beautiful time in its 250-year history, when the institution is prospering and the rector’s leadership is committed to improving the university, including the student experience. “You are about to start your studies, benefiting from a curriculum reform that puts practical education at the forefront and a model change that offers promising prospects. Extensive dormitory renovations are underway and ongoing improvements will provide you with more student space,” he said.

The list of students who have been awarded the National Higher Education Scholarship for the academic year 2021/2022 was announced. 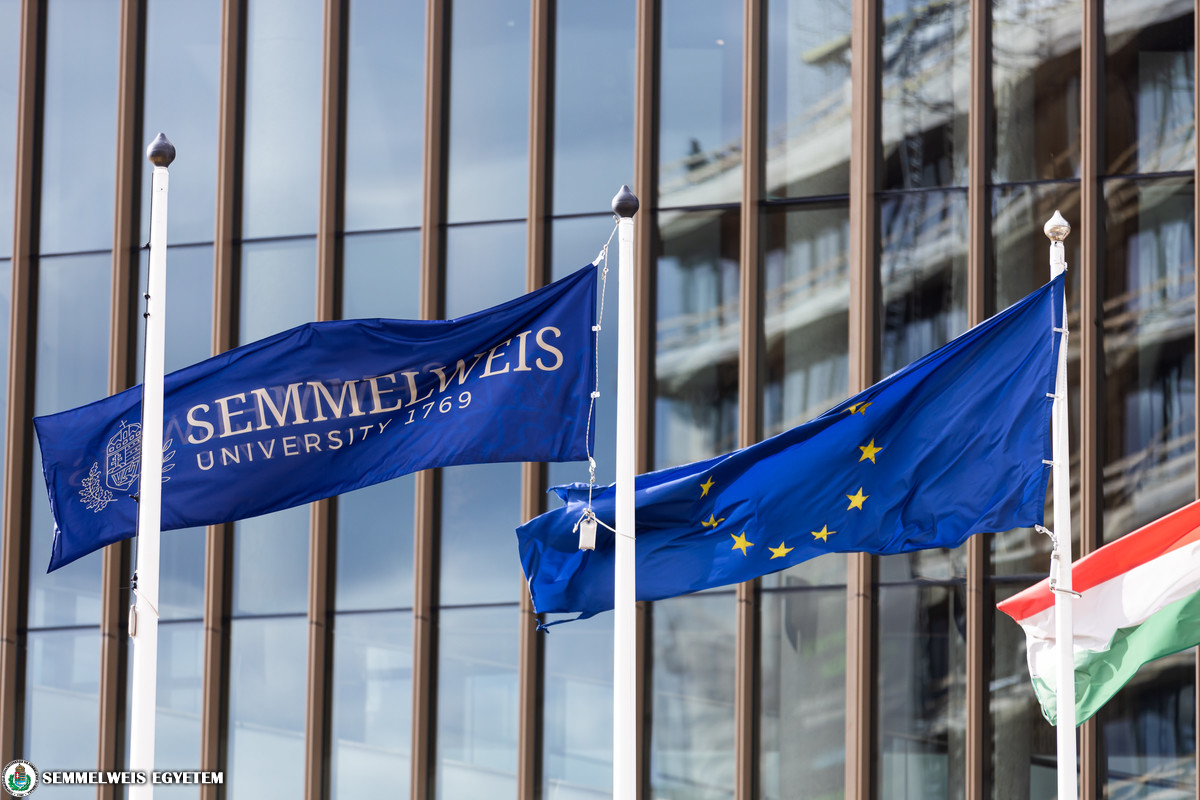 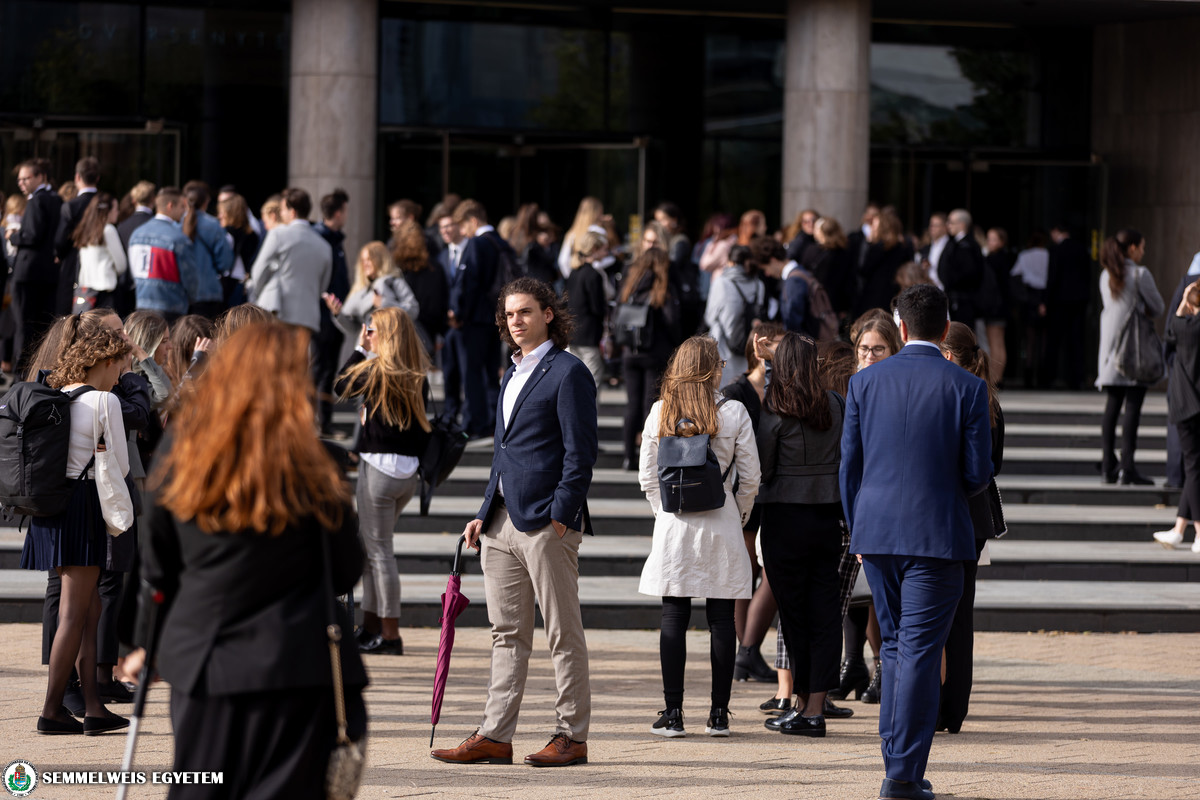 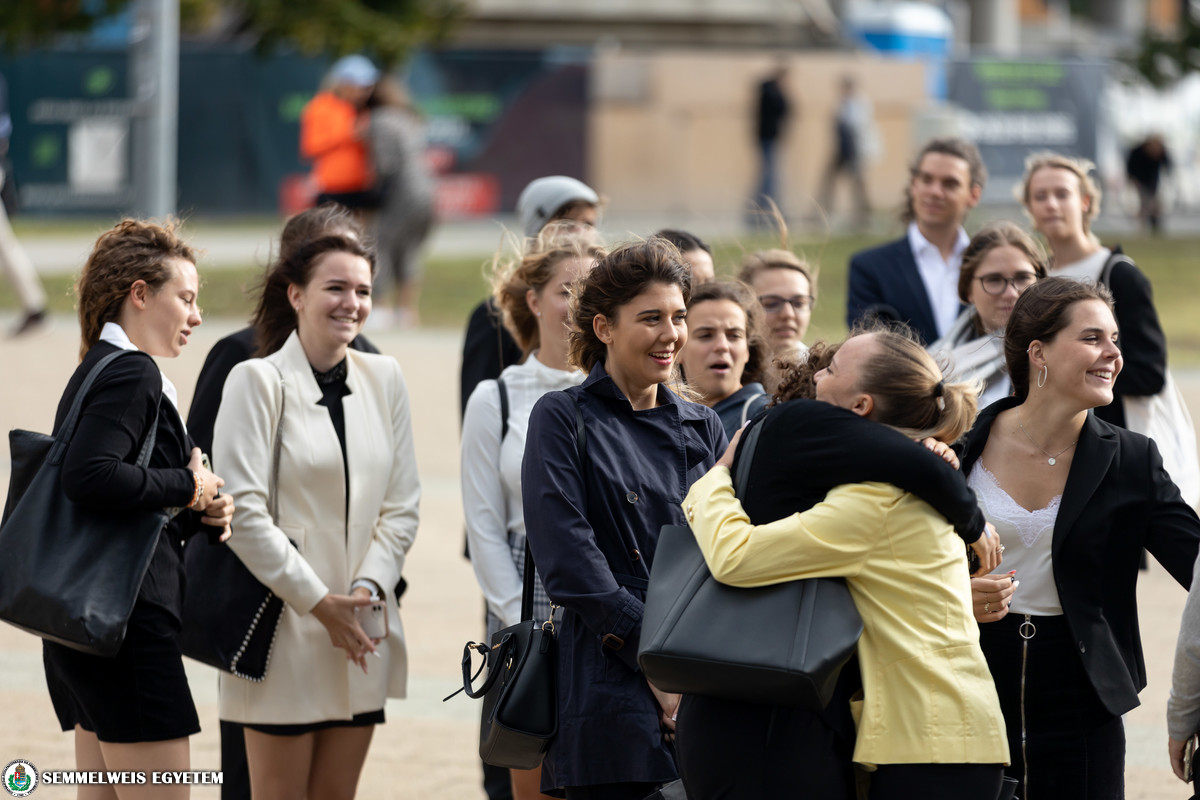 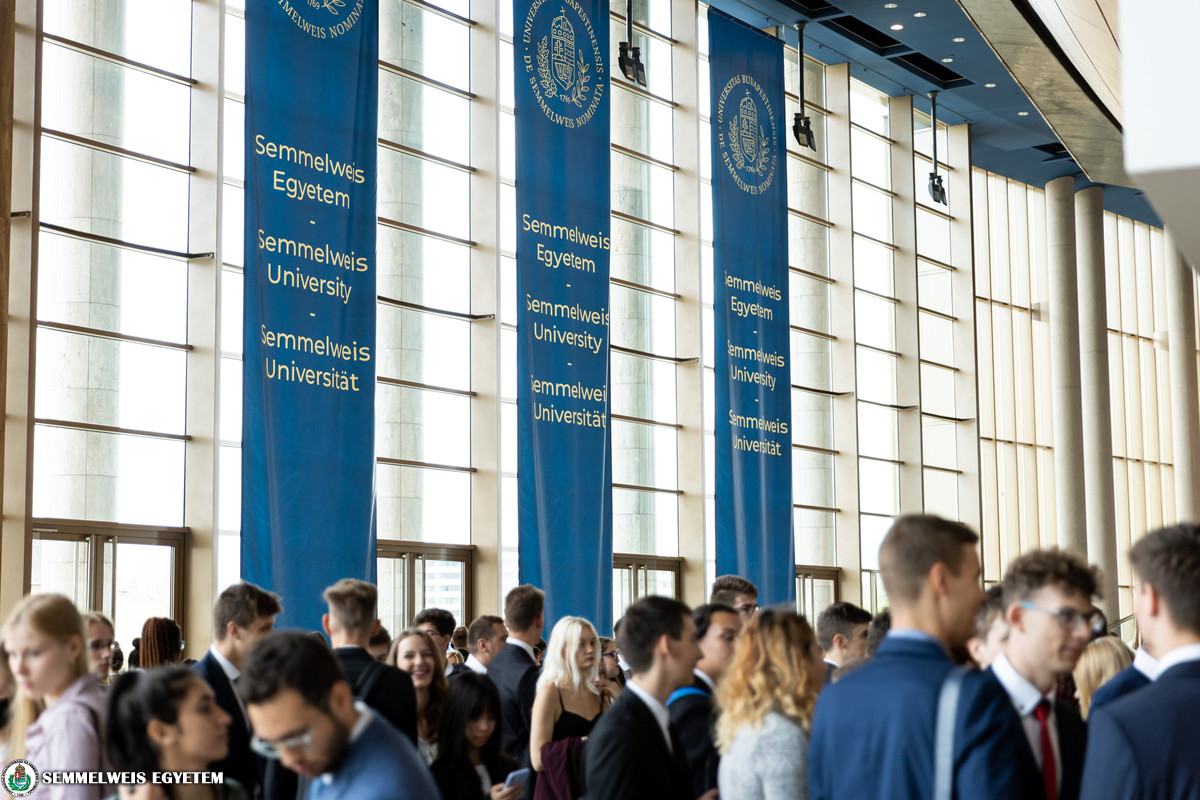 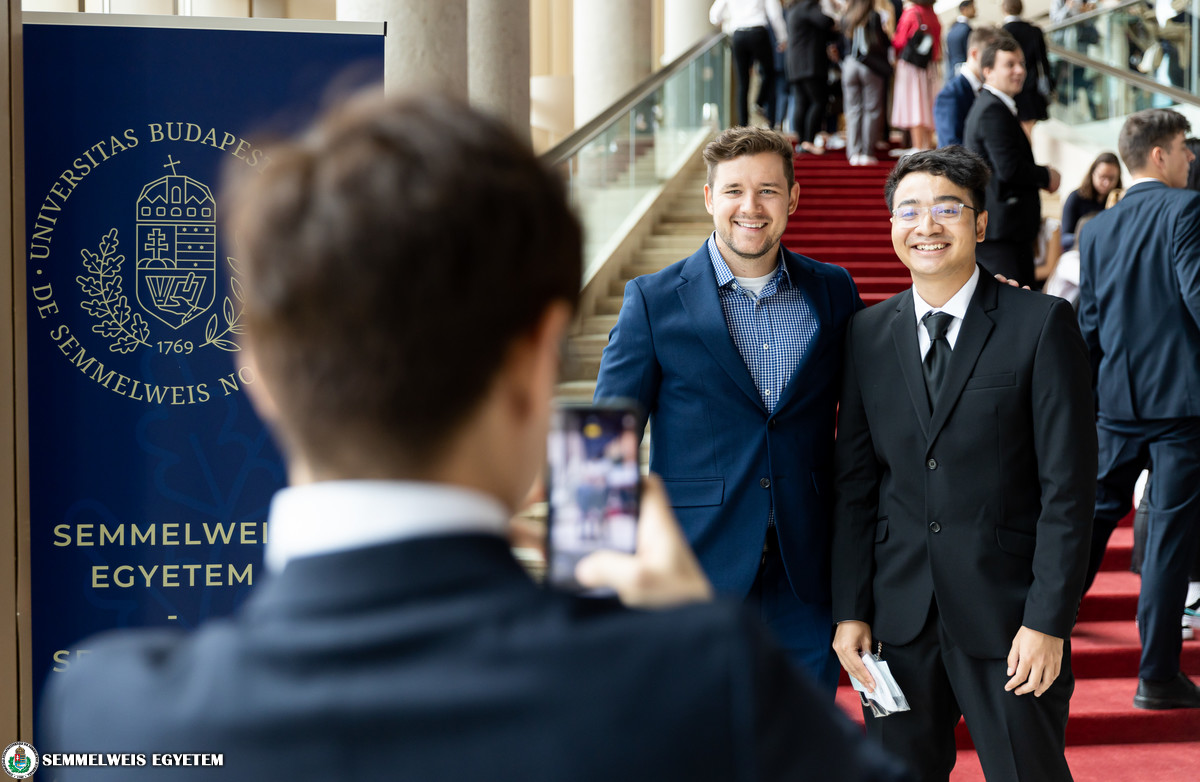 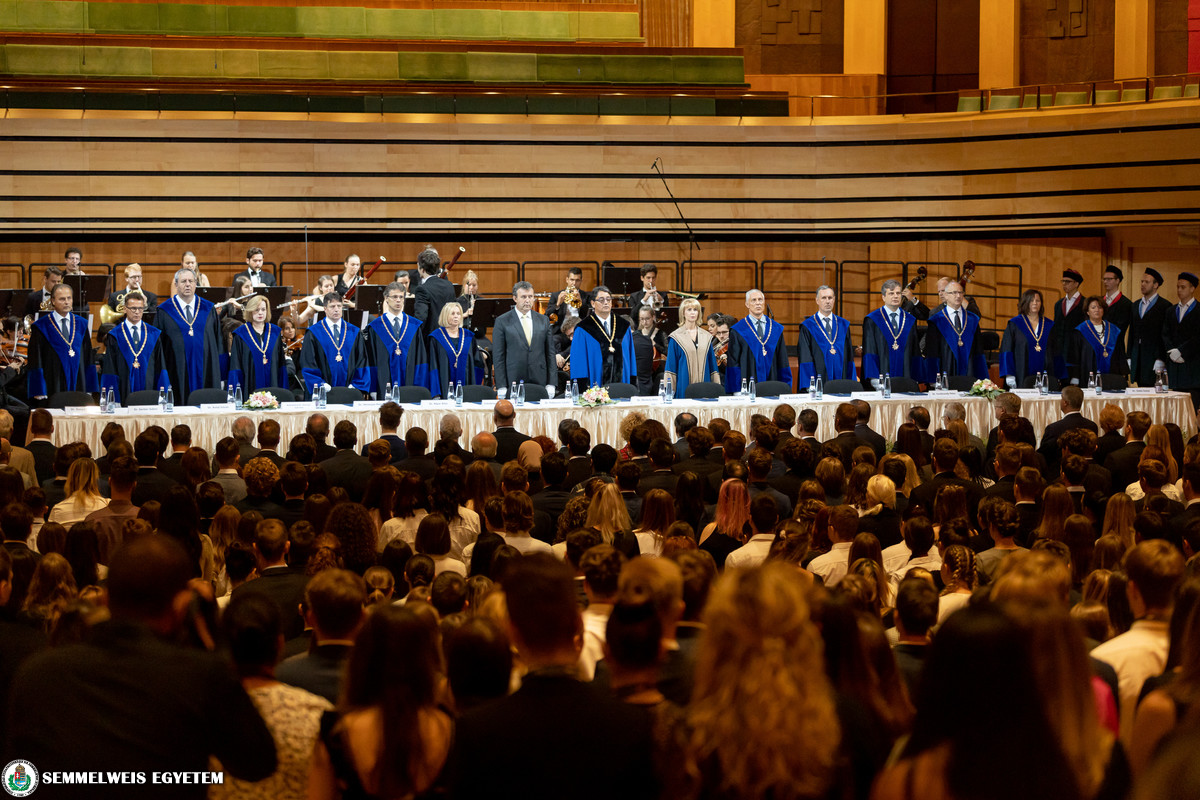 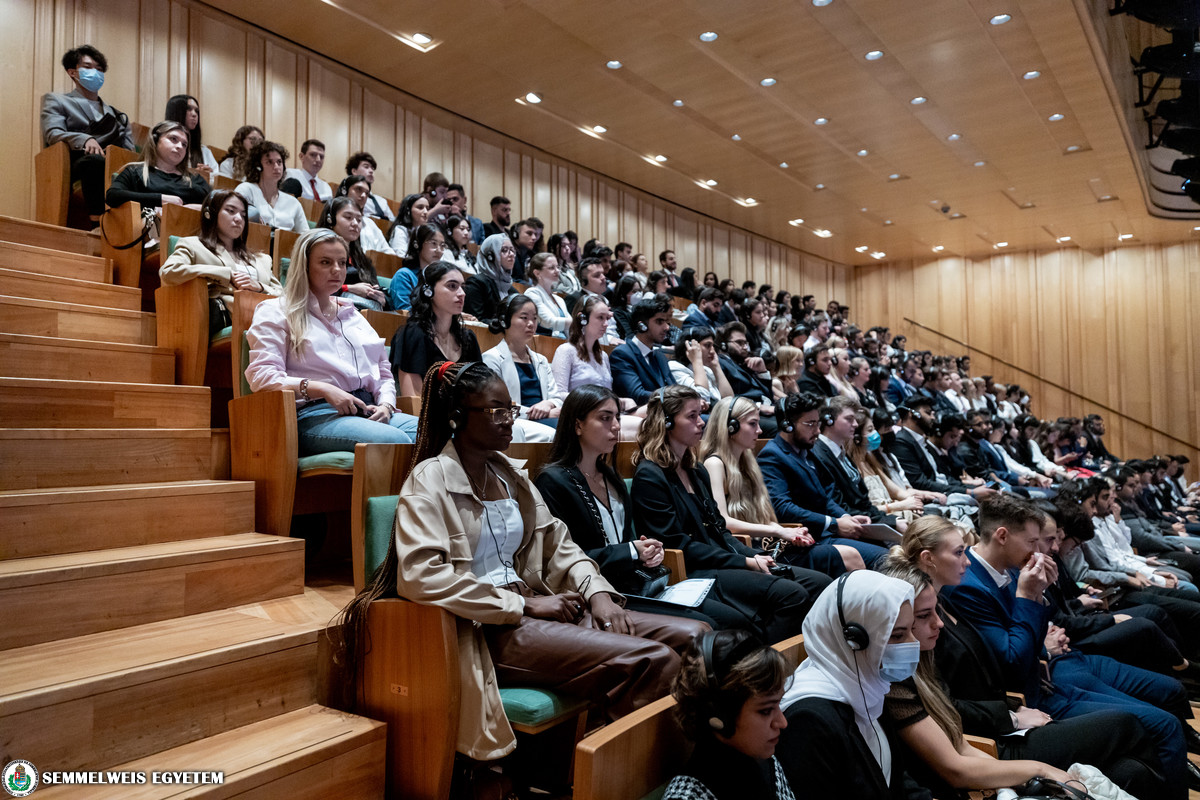 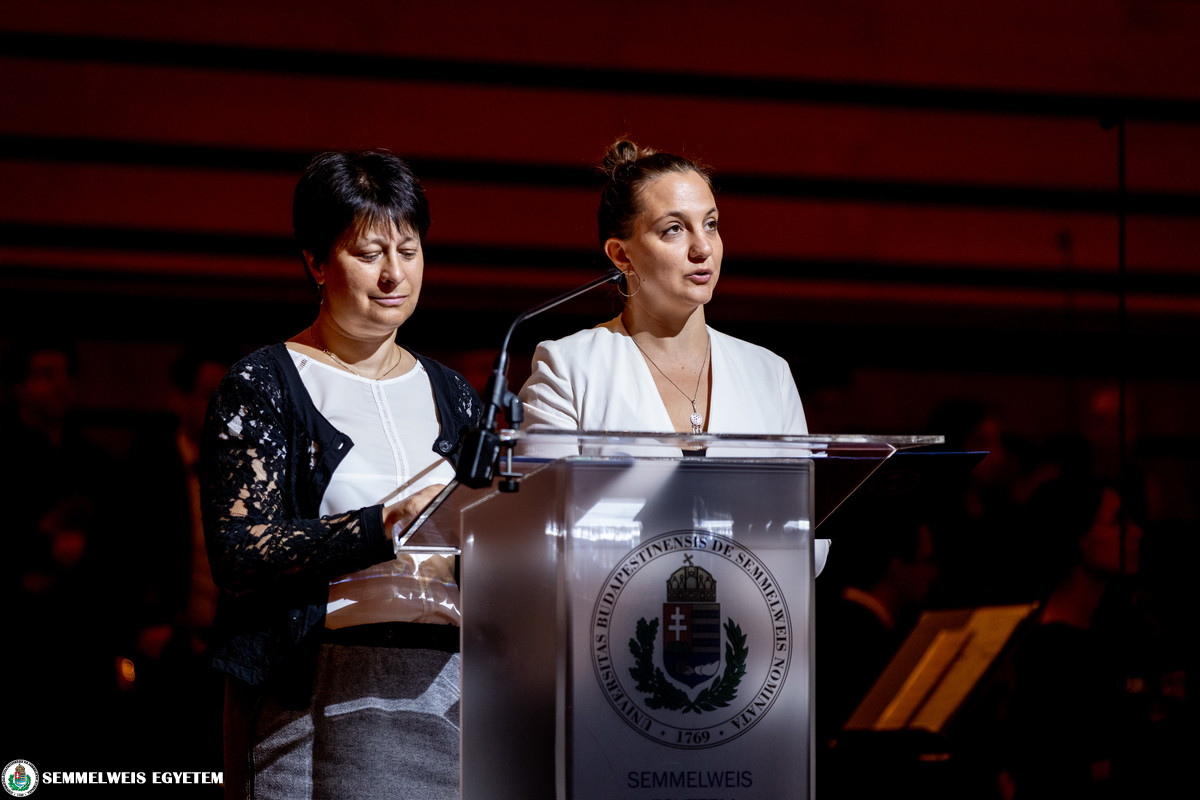 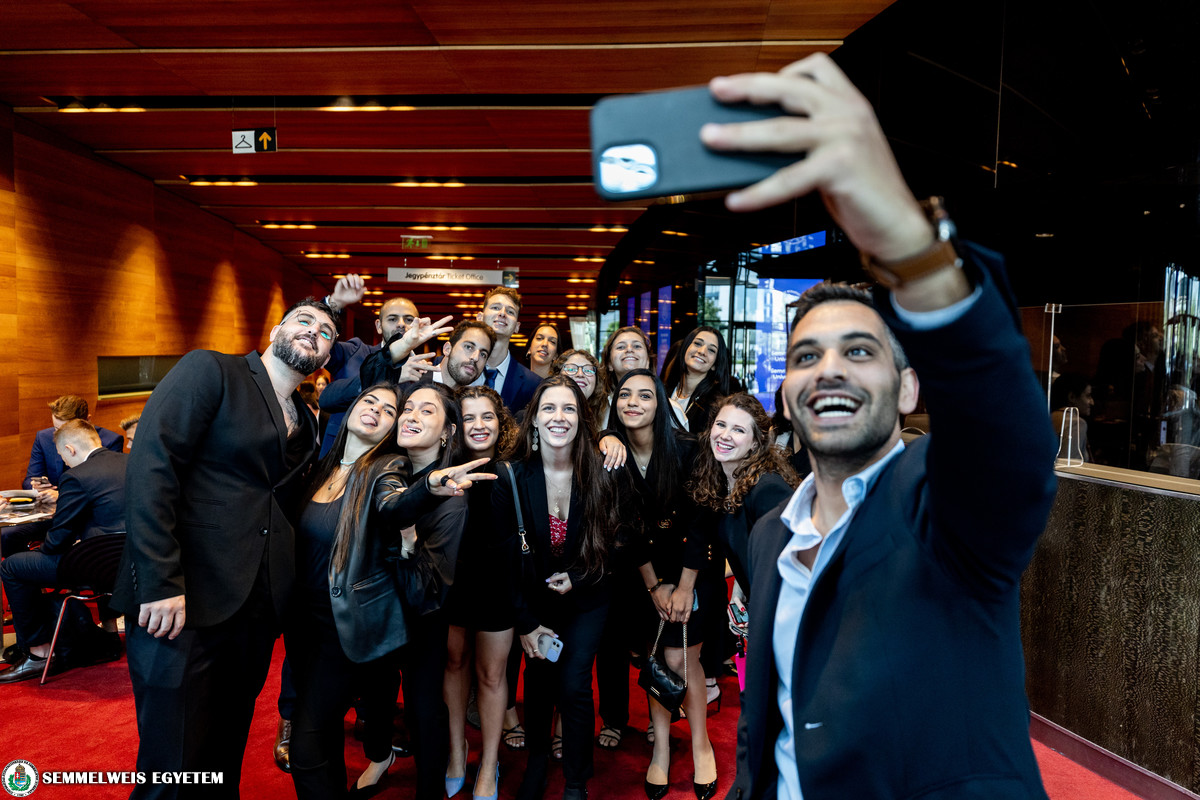 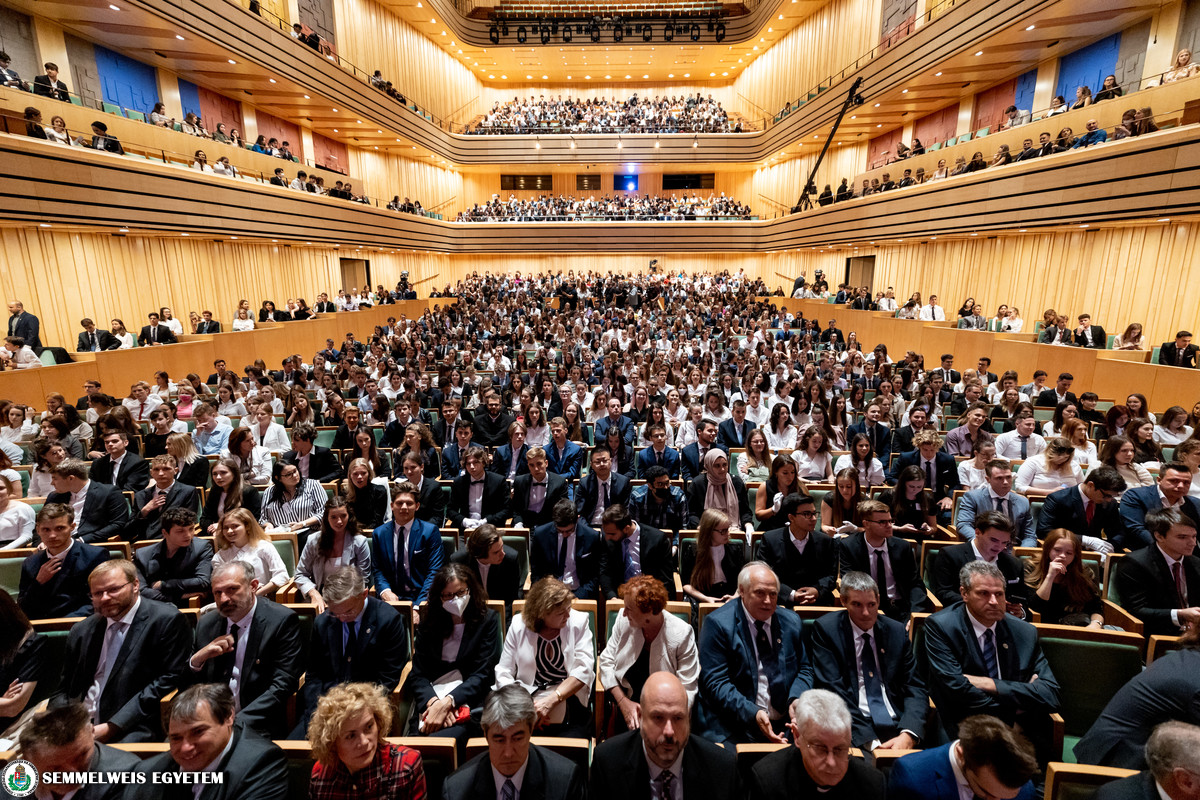 To close the opening of the academic year, the Medic Orchestra performed Beethoven’s “King Stephen” Overture.

Due to the pandemic situation, the event was broadcast live in the Great Hall of the Nagyvárad tér Theoretical Building, in parallel with the event in MÜPA. 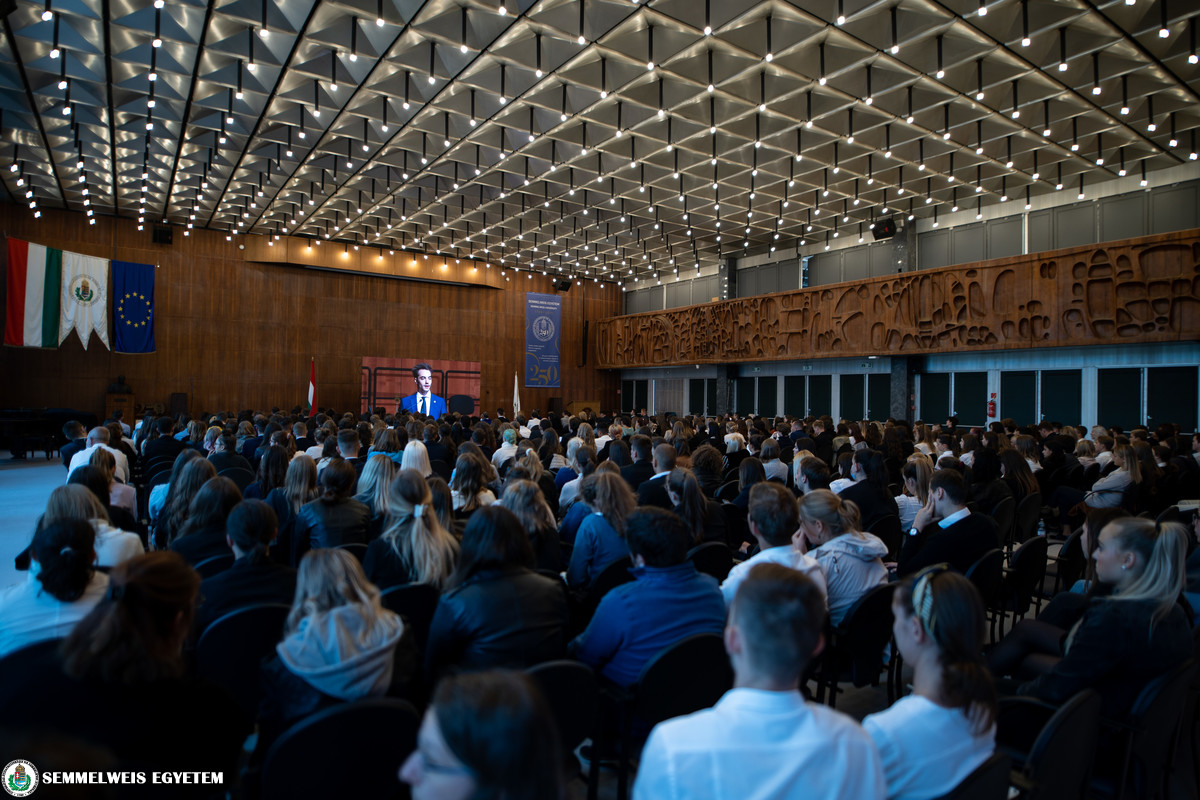 More than 3200 students will start their studies at the six faculties of Semmelweis University in the academic year 2021/22, with almost one-third of them enrolled in the English and German language programs.

For more photos, see our original article in Hungarian. 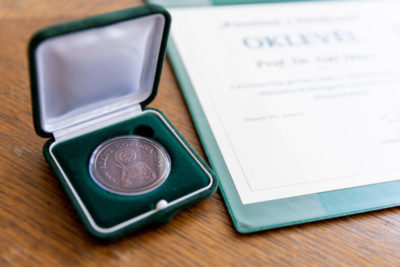 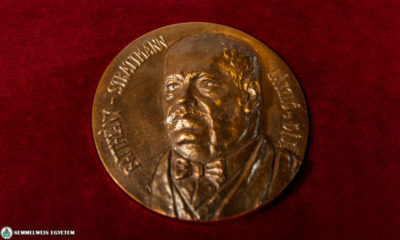 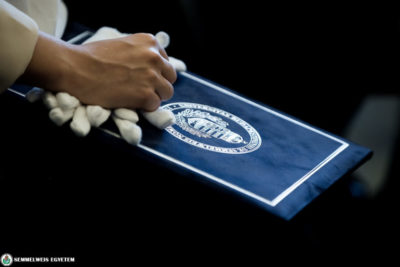