“As of today, you are not merely students, but citizens – citizens of Semmelweis University,” rector Dr. Béla Merkely told the new first-year students on the first day of the ceremonial events opening the university’s 250th academic year. He called the attention of the new class of students to the fact that whether they become doctors, dentists, pharmacists, health care professionals or conductors, people will be placing their greatest wealth, their health, its protection and restoration into their hands. “Your task will be to accept this service, with faith and humility, and with commitment and dedication to the patient,” he said. 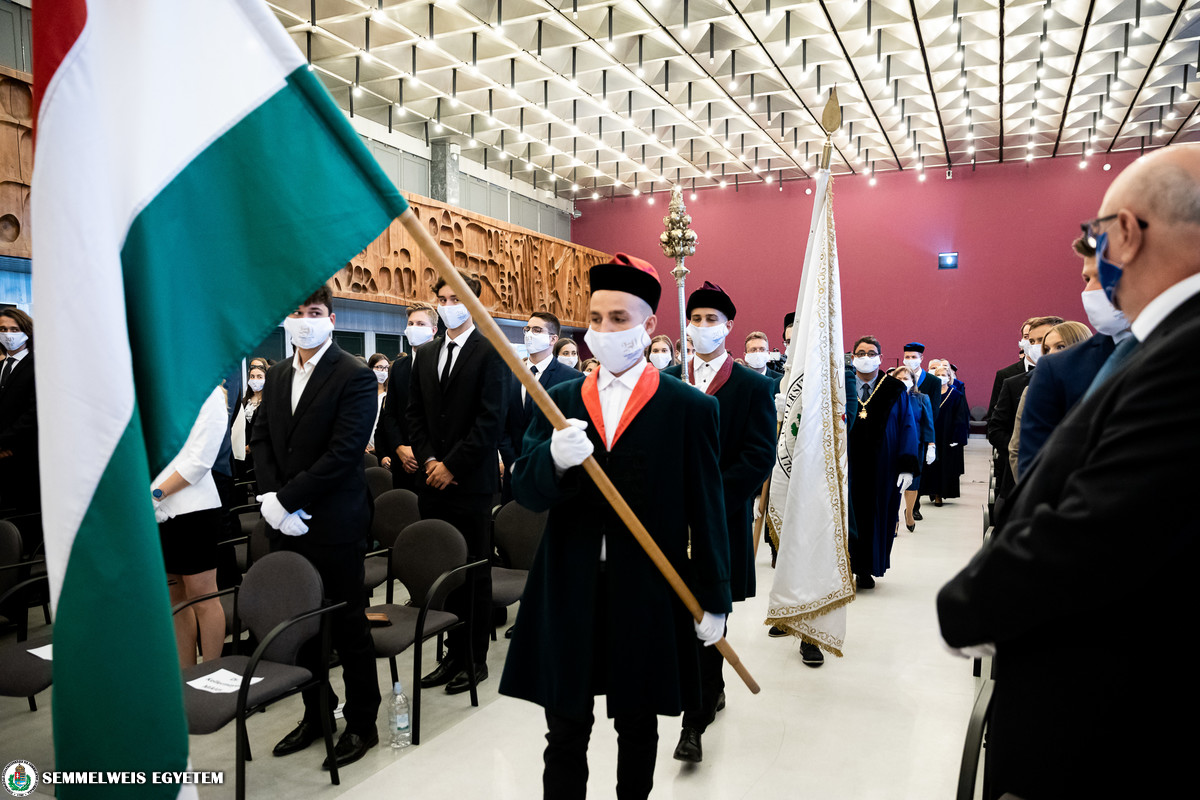 He noted that the university places special emphasis on students becoming independent, thinking and responsible professionals, who will seek knowledge proactively, and will be curious in inquiring. “This is the vision that guides the curriculum reform started last year, in honor of the university’s 250th anniversary, which places the emphasis on practice-oriented training, and it is also what the life of Ignác Semmelweis teaches us: we should never be satisfied by just doing our duty, and should never be afraid to stand up for what we believe is right,” the rector stated. 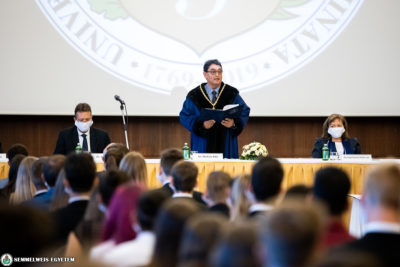 The rector invited the new students to be partners in achieving the goal of making Semmelweis University one of the top 100 universities in the world, and among the top five within its field in Europe. This is supportd also by the state-funded Semmelweis XXI Development Program, which has already brought, and will continue to bring, notable developments to the life of the university.

He also mentioned the pandemic caused by the coronavirus, noting that Semmelweis University took on a leading role in the fight against tas expected of a leading medical and health sciences university of Central Europe. Since medical and health sciences trainings are unimaginable without practical training, the university is preparing for a hybrid semester, with a mix of in-person and online education. Semmelweis University will continuously provide free PCR testing for students and staff, while the wearing of masks and social distancing on university premises will be mandatory.

Rector Merkely stressed that looking at the current number of new cases, we have to accept that the time for large social events and gatherings is over, and the importance of wearing a mask, washing hands, and social distancing is indisputable. “By starting your studies, you will also become ambassadors for health, and I ask you to set an example for your environment with your behavior,” he emphasized. 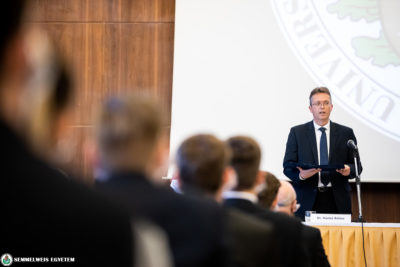 Dr. Balázs Hankó, deputy state secretary of the Ministry for Innovation and Technology in charge of higher education, who was until recently the university’s vice-rector for strategy and innovation, noted the exemplary role that Semmelweis University has played over the past six months. It took a leading role in the fight against the coronavirus by providing continuous education and patient care services, by conducting research activities supporting the fight against the pandemic, by procuring personal protection equipment to the country quickly, by its clinical epidemiology analysis group and by organizing the H-UNCOVER national coronavirus study. “Today, it is a national sentinel providing virus screenings and taking a role in informing the public,” he added.

He talked about the Semmelweis XXI Development Project, which is the university’s comprehensive strategic development plan aimed at supporting its goal of becoming one of the top 100 universities in the world by 2030. He noted that in recent years, the government has passed 12 decrees concerning the university’s development, providing a total of HUF 23 billion in funds. He added that decisions have recently been made on providing academic research grants in the value of HUF 43.9 billion to 27 scientific institutions in 92 fields of research. Semmelweis University will be awarded HUF 4.91 billion in funding in this program.

Dr. Hankó recalled that the goal of the government by restructuring higher education training in 2019 was to make it more flexible in responding to social needs, which is reflected in the reform of medical, dentistry, pharmacy and health sciences training. 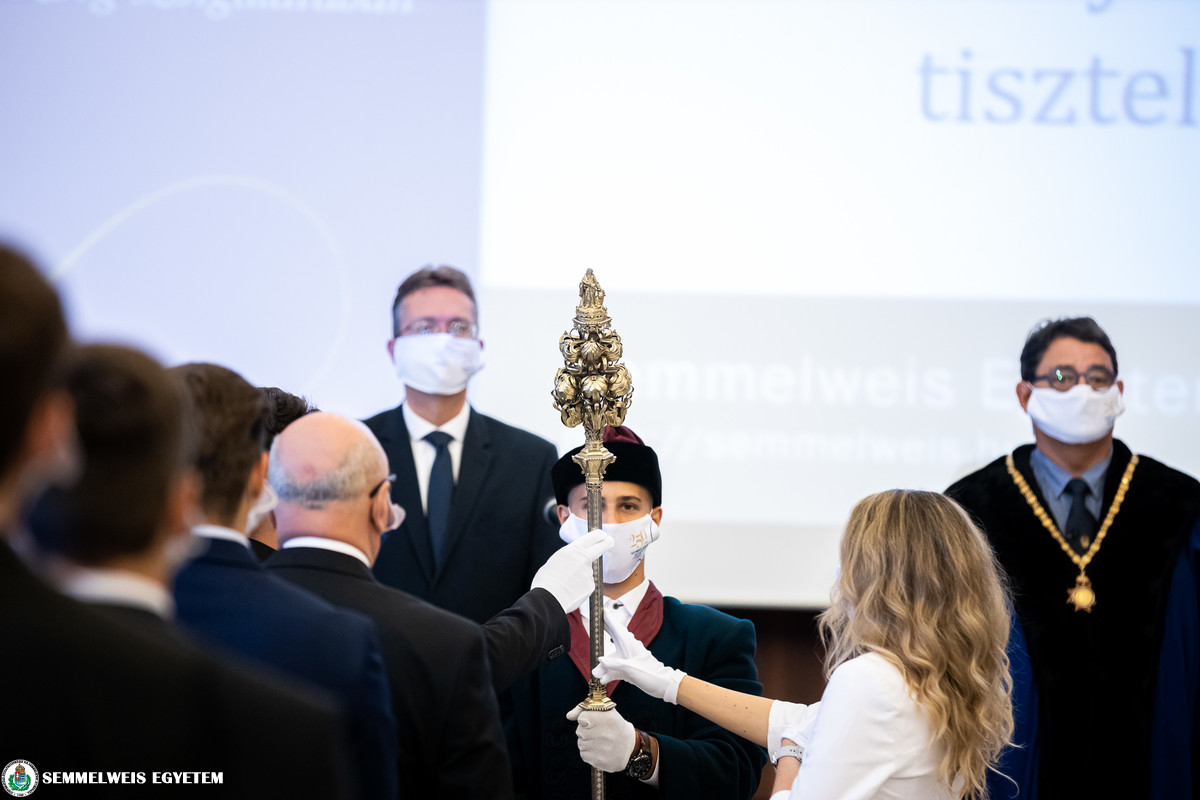 The speeches were followed by the first-year class taking their student oaths. The first event on Saturday was held for students of the Hungarian programmme at the Faculties of Medicine and Dentistry. At this event, several university awards were also handed out, including the Pro Universitate, Outstanding Lecturer, Outstanding Worker and Pro Juventute Universitatis Awards. 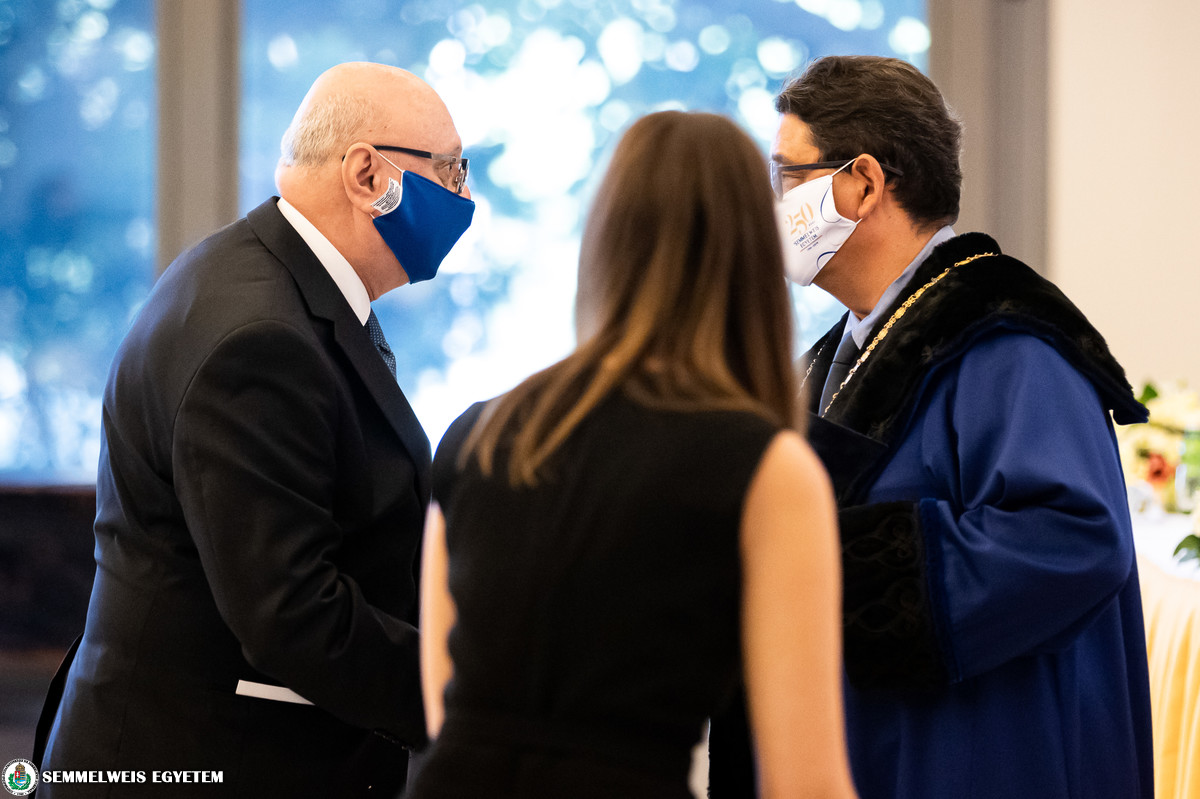 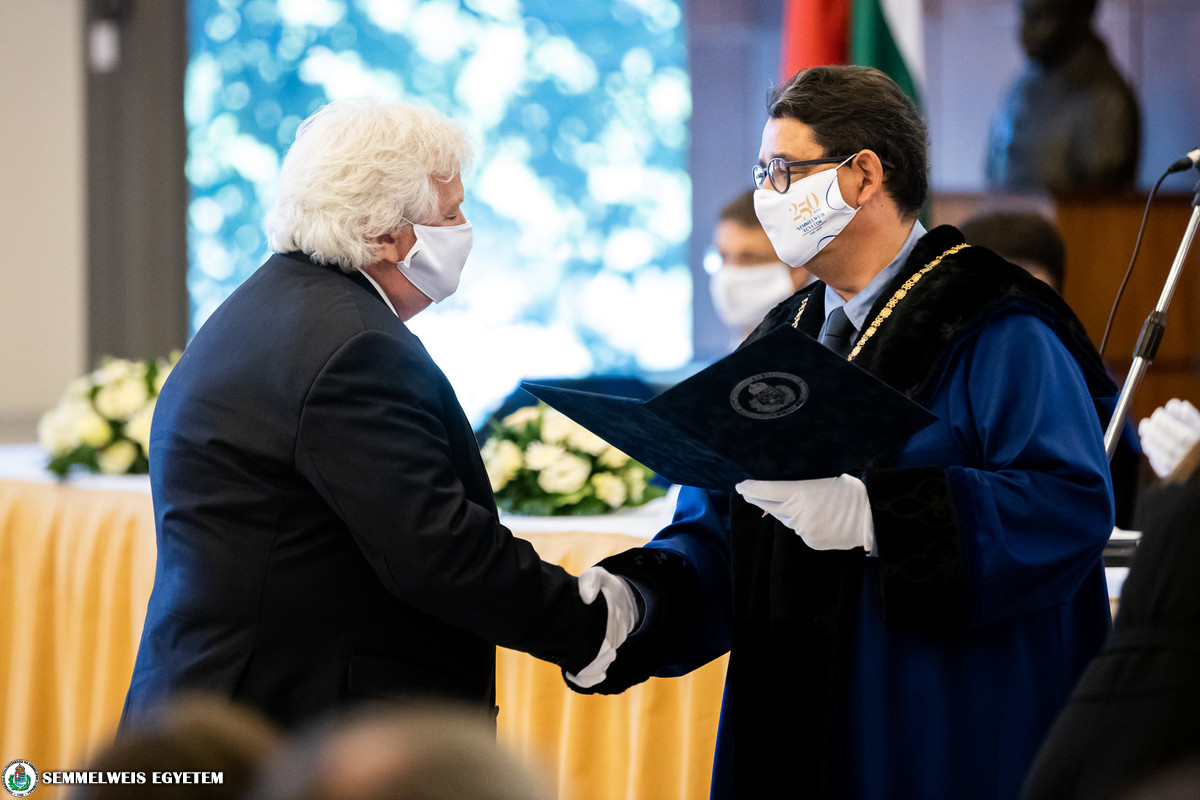 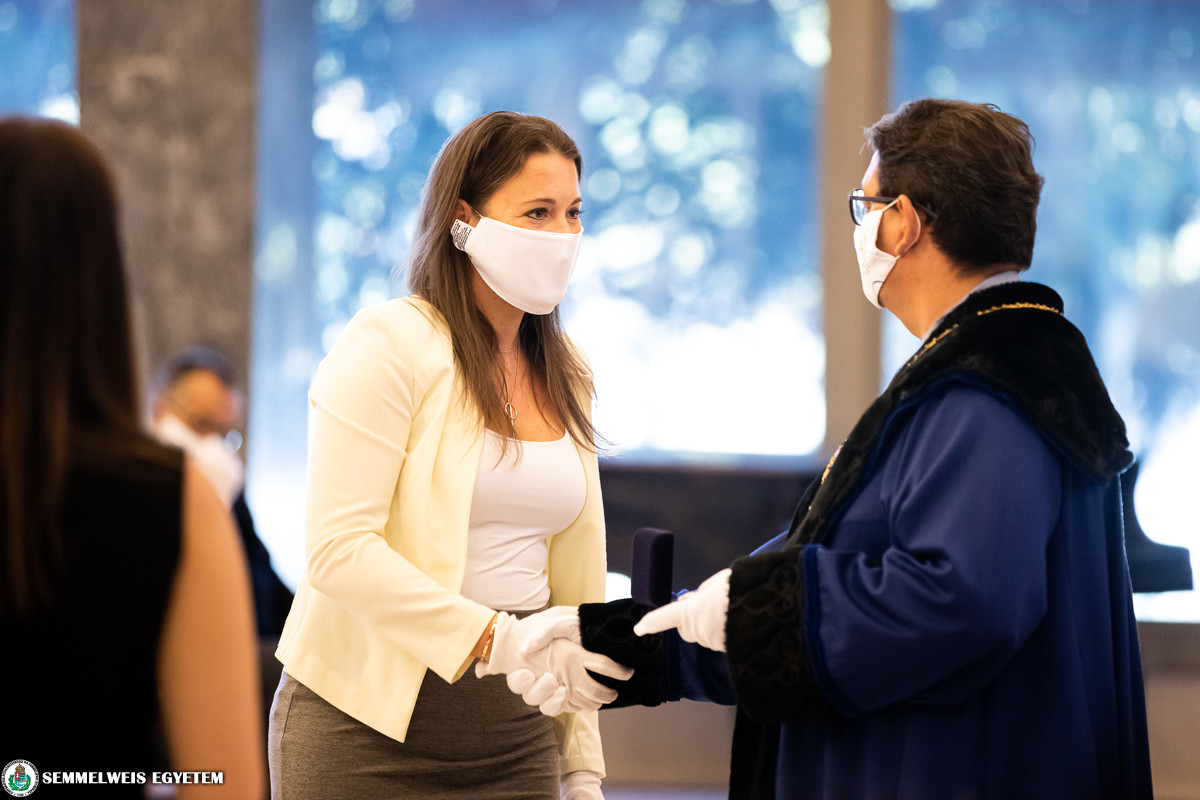 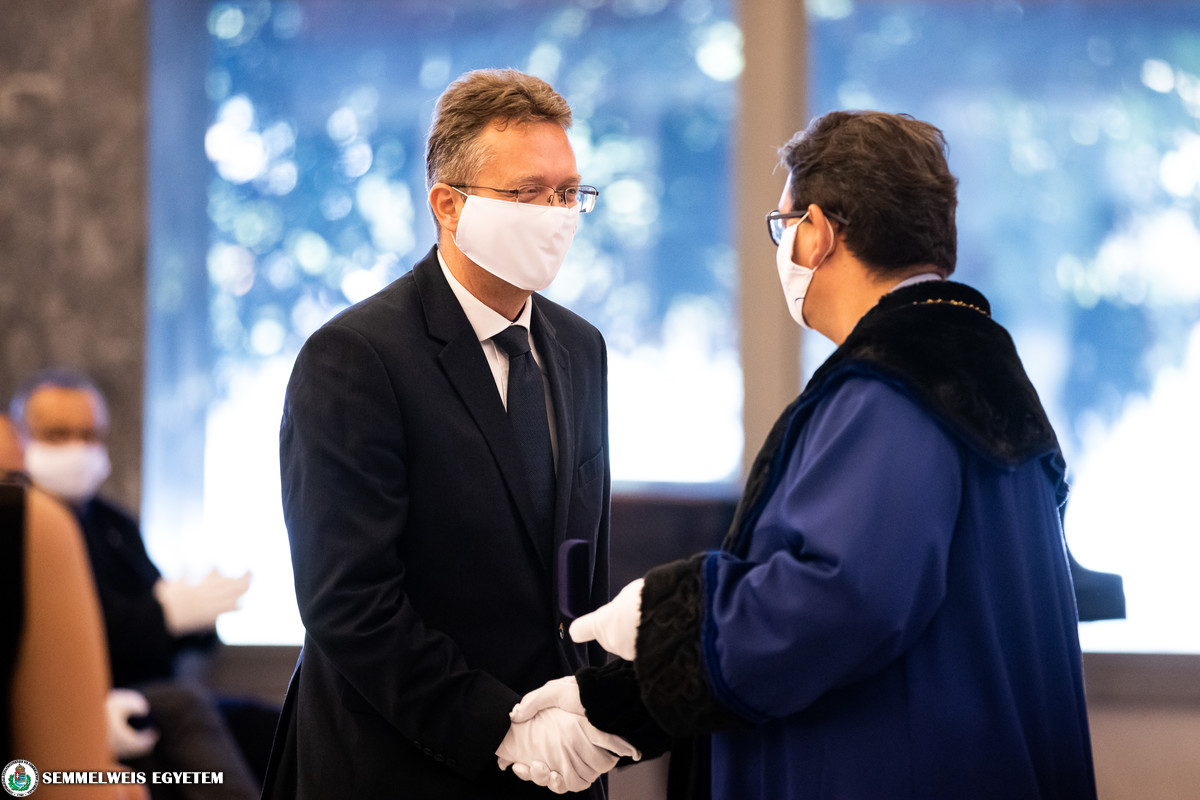 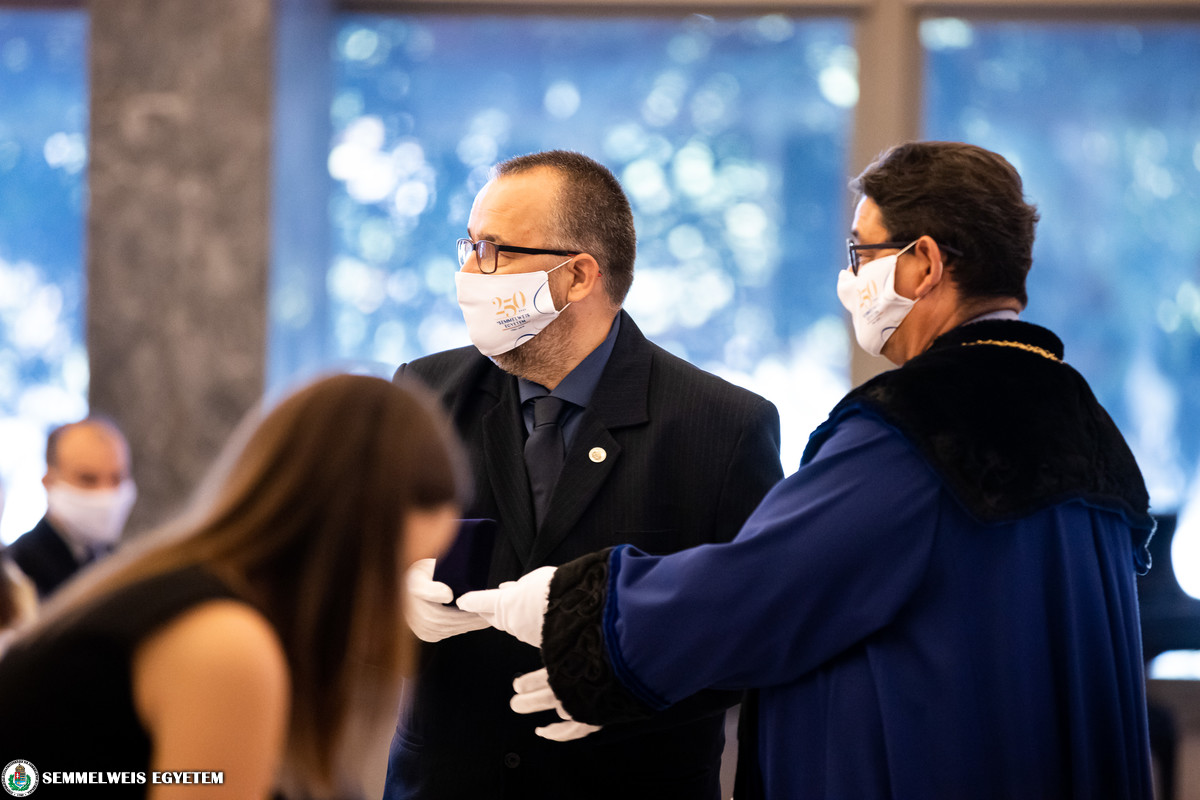 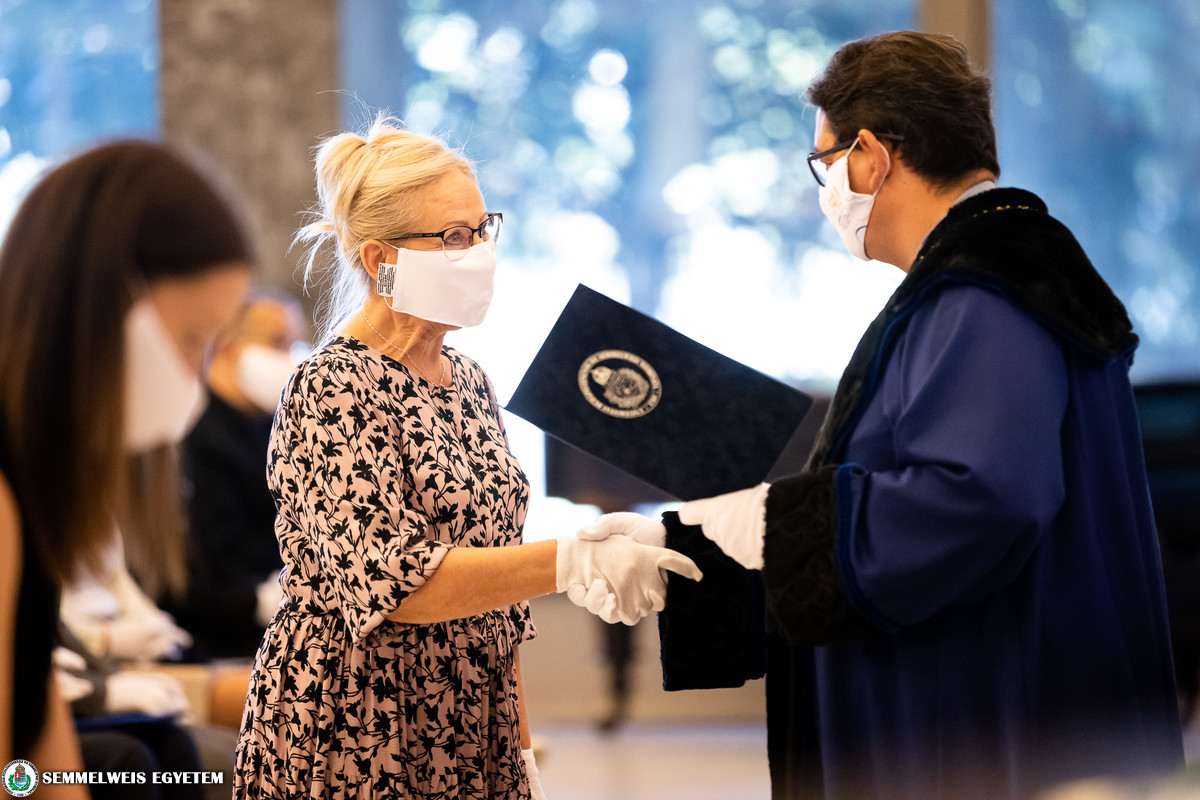 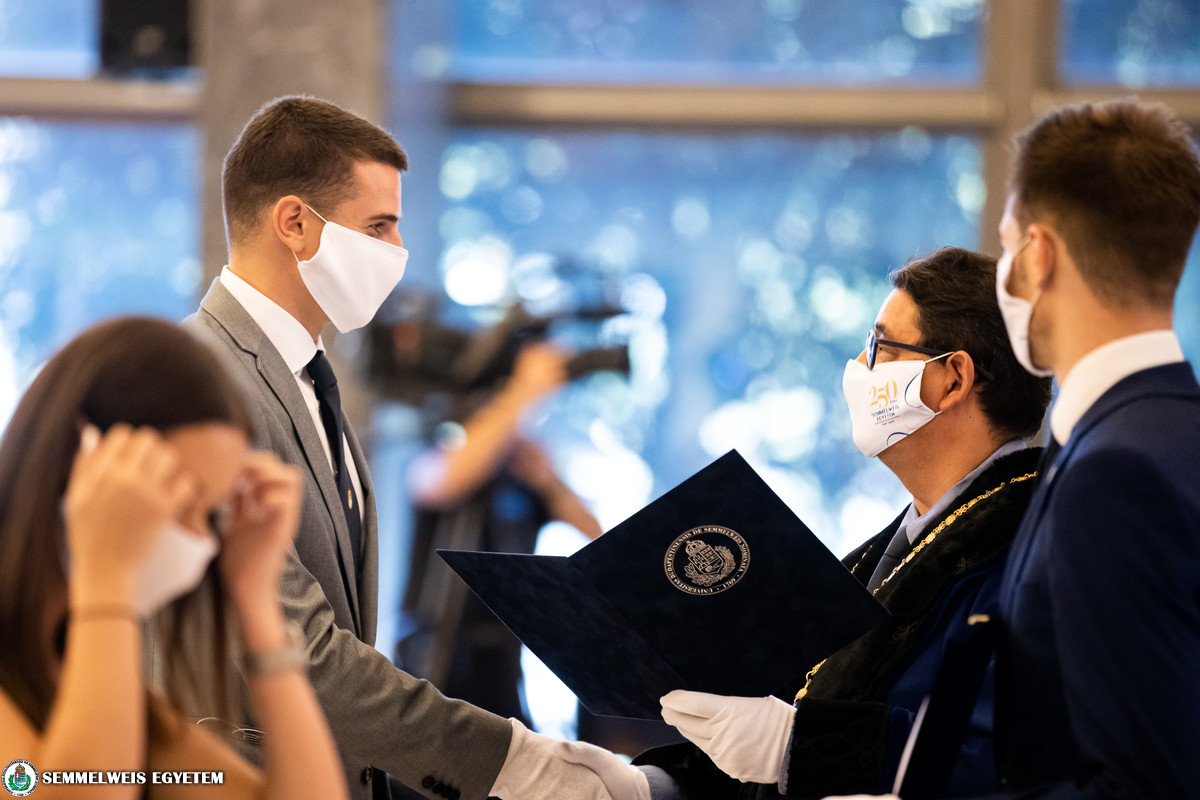 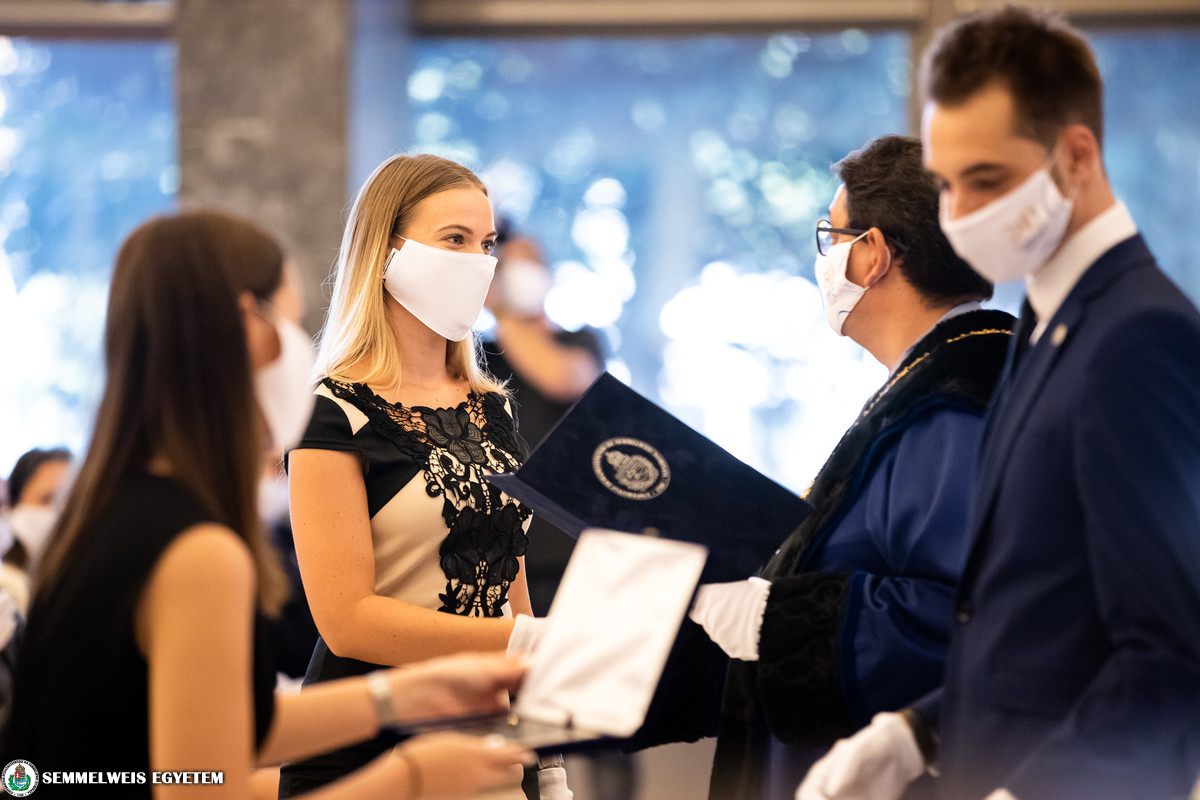 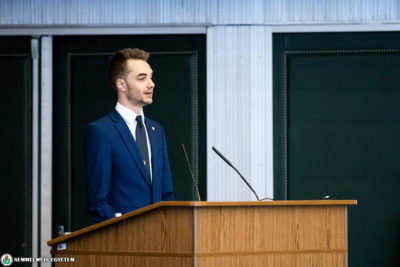 Next, Bálint Tripolszky, president of the Students’ Union welcomed the freshman class. He noted that they are entering the university at a time when it is prospering, with a leadership that is committed to making life at the university better, including for students. “You are starting your studies by being able to enjoy the benefits of the new, practice-oriented curriculum, dormitories are being upgraded, and other developments are under way that will lead to more student spaces being available,” he pointed out. Taking the oath is an important symbolic step in recognizing your vocation and belonging to a community, and being a student at Semmelweis University is not just an honor but a responsibility as well. 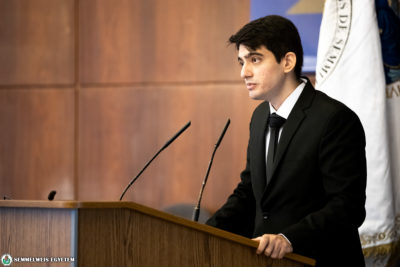 There two other events held on the same day, where Rector Merkely also held speeches. The day’s second event was for students enrolled in the English language programmes of the Faculties of Medicine, Dentistry and Pharmaceutical Sciences. Representing the students, a speech was given by Moein Moeinzadeh, a fourth-year medical student and president of the International Semmelweis Student Association (ISSA). He congratulated the new class, and noted that one of the most important things to strive towards during their time here is to maintain and surpass the standards set by Semmelweis University. “Through effort and hard work, it is our duty to uphold the tradition of excellence and to ensure the continued rise of Semmelweis University as an elite university on the world stage,” he said. He also called on students to get to know their fellow Hungarian and international students, as well as Budapest and Hungary, and to not hesitate to turn to ISSA with their questions.

It was also mentioned at the event that this year, 10 international students at the Faculty of Medicine, and 4 at the Faculty of Pharmaceutical Sciences will be starting their studies with a scholarship of excellence from the Hungarian state-supported Stipendium Hungaricum program. 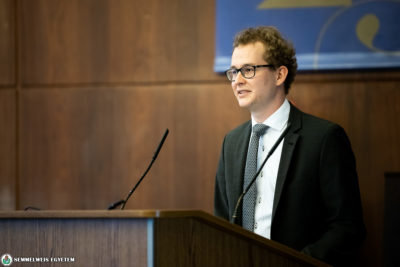 At the final event of the day, students of the German programmes at the Faculties of Medicine, Dentistry and Pharmaceutical Scineces, as well as those of the English programme of the Faculty of Health Sciences, took their solemn oaths. Fabian Dehne, medical student and chairman of the German-speaking Student Association of Semmelweis, welcomed the new students. He noted that Semmelweis University can look back on a 250-year tradition and has been providing training in German since 1983. “Due to this long tradition, you will get to know a most fascinating mixture of tradition and modernity in the course of your training. This is evident not only in the contrast between the beautiful historical university buildings and the modern clinic complexes, but also in the very solid training in the basics through to the modern methods of pharmacy, dentistry and medicine,” he said.

At Semmelweis University’s six faculties, in the first semester of the 2020/2021 academic year, a total of 3,340 undergraduates are starting their studies, including 2,413 in the Hungarian, 546 in the English and 381 in the German training program. In addition, 186 people are starting their postgraduate doctoral studies. 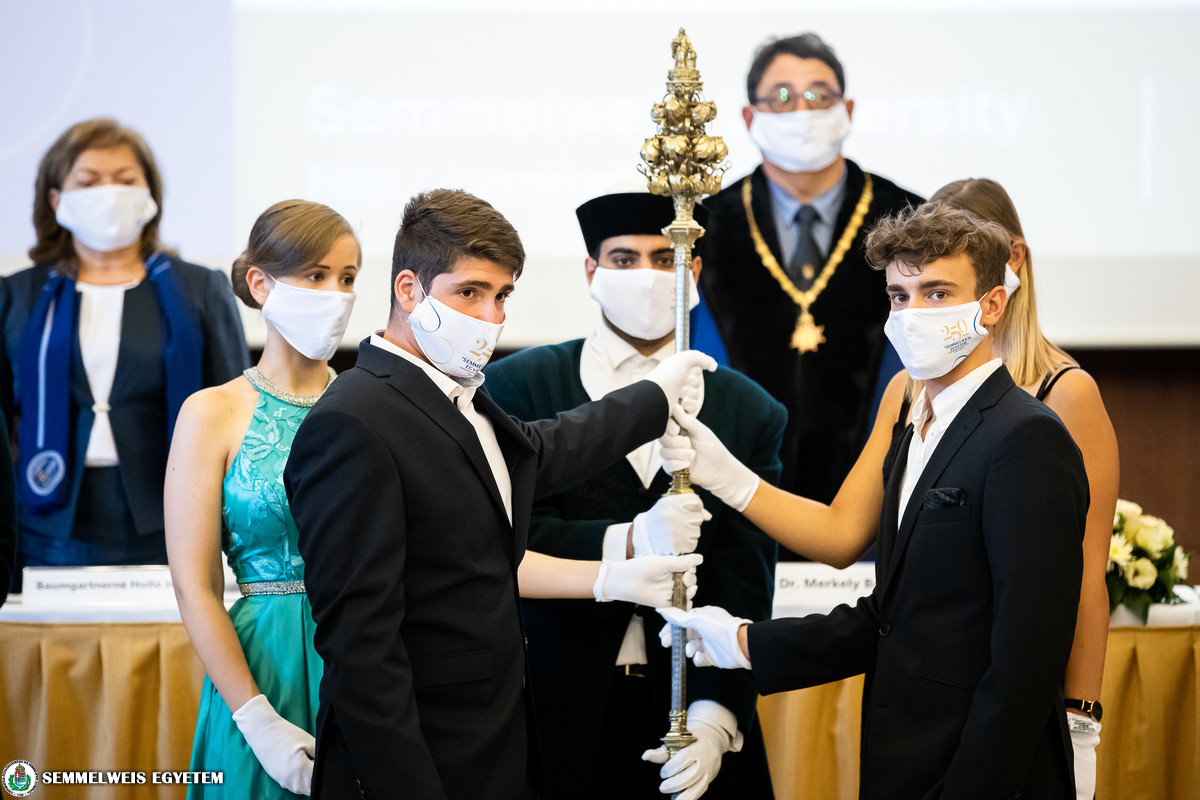 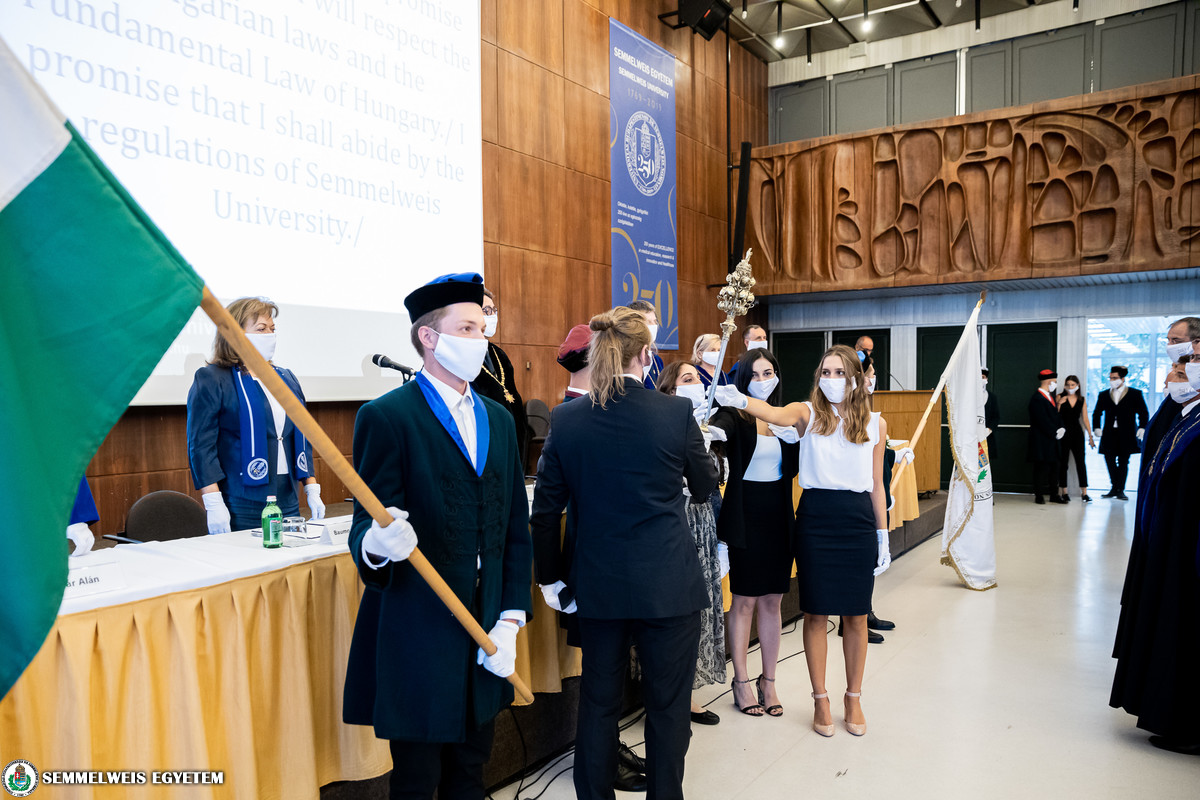 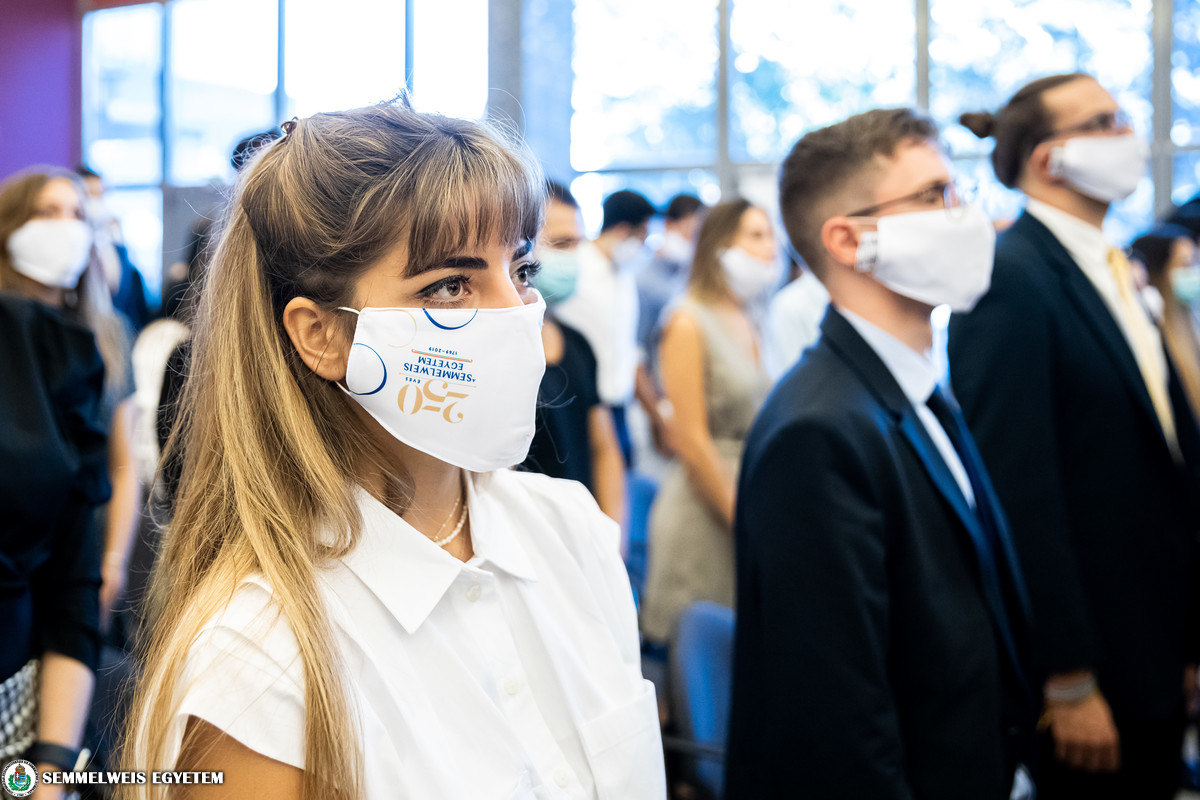 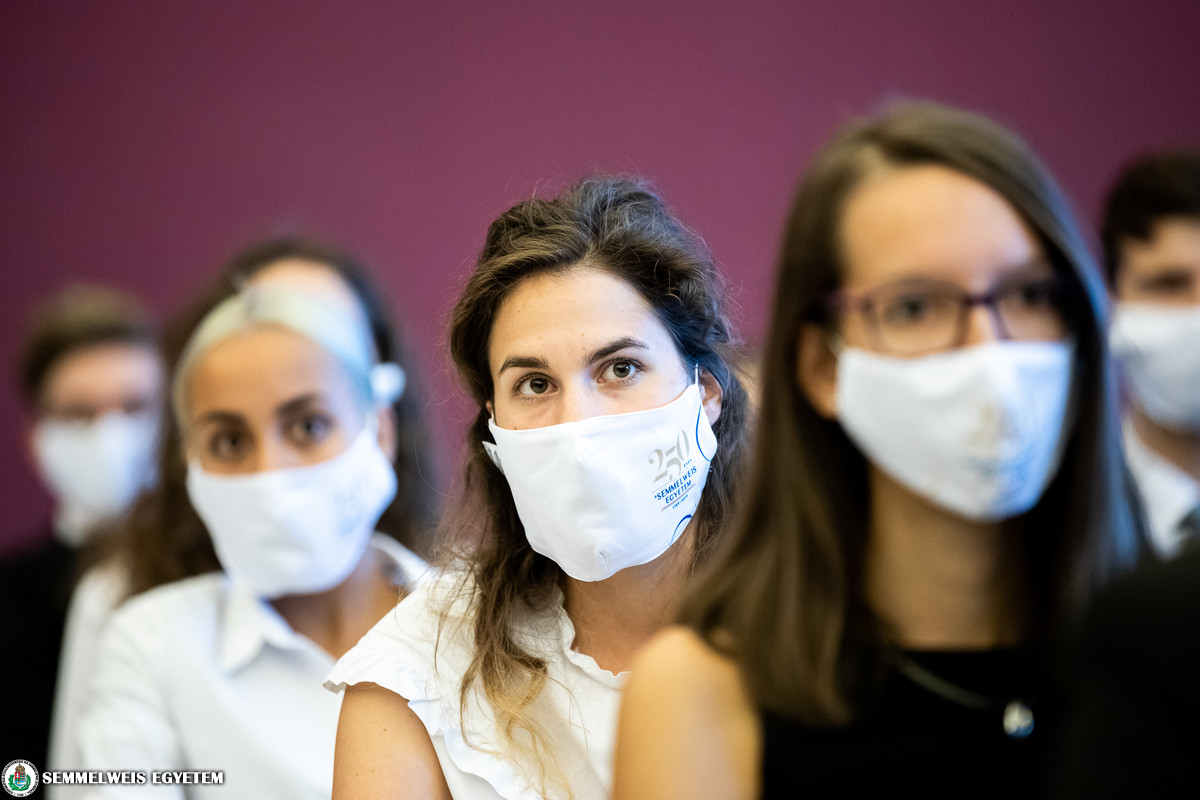 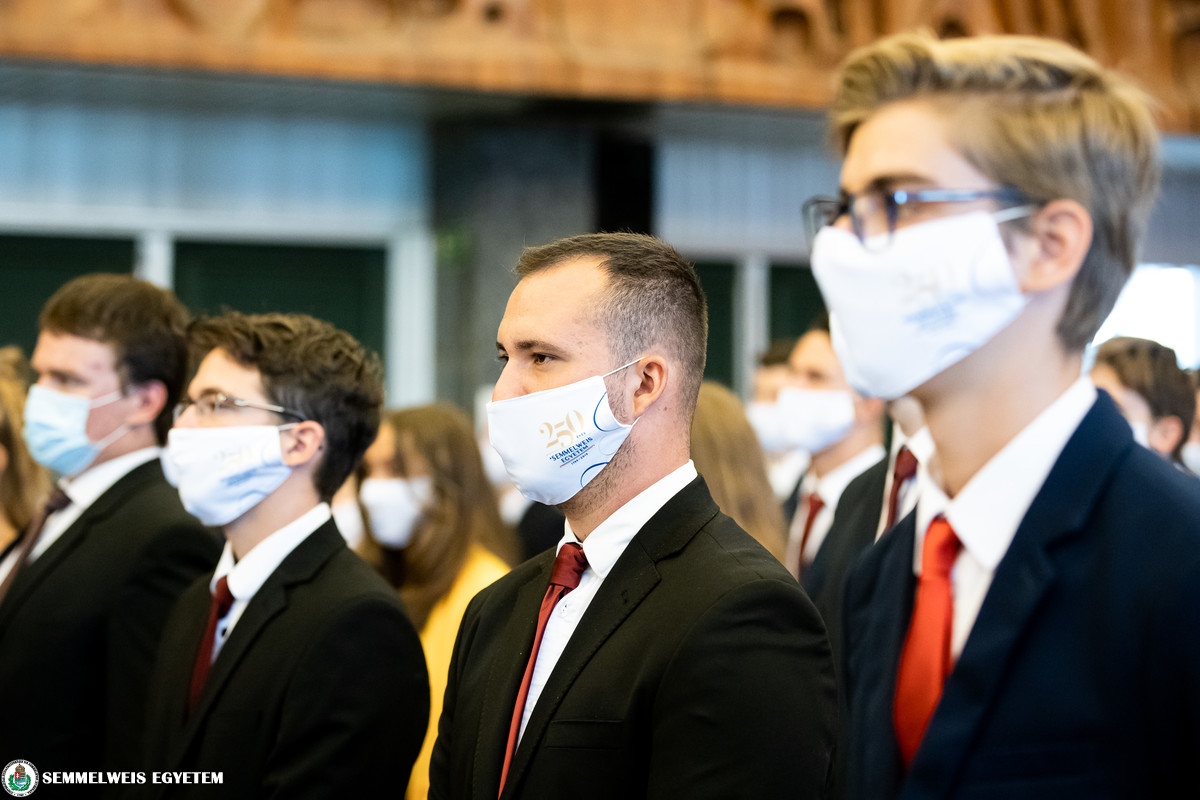 At the ceremonies marking the start of the 250th academic year, students took their solemn oaths on the original sceptre made in 1772 for the medical faculty of the university’s legal predecessor, the University of Nagyszombat, while the rector wore the chain of office that was presented by Francis I to the university in 1819 upon its relocation to Pest.

The two-day opening ceremony event continued on Sunday with two more events, where students enrolled in the Hungarian program of the Faculty of Pharmaceutical Sciences, the Faculty of Health and Public Administration, the Faculty of Health Sciences and the András Pető Faculty took their oaths. At the first event, Vice-Rector for Education Dr. Péter Hermann held a speech, highlighting that Semmelweis University has been moving up steadily in international rankings, and asked the new class of students to contribute to the continued improvement of the university. At the day’s second event, students were greeted by Dr. Gabriella Bednárikné Dörnyei, dean of the Faculty of Health Sciences, who told them to turn to their teachers and mentors without hesitation should they need help, and also noted the significant investments and developments the faculty is currently undergoing. Read the full report on the day’s events, including a photo gallery, in our Hungarian article.