No. of vaccines administered at Semmelweis University - 22 January 2023
More information
The 52nd Semmelweis University Freshers’ Camp was held between 16-21 August in the Tata Youth Camp again. Rector Dr. Béla Merkely visited the programs of the sports day, the third day of the event, which welcomed 820 freshers, including some 30 foreign students, divided into 23 teams. In his welcome speech, the rector wished the future Semmelweis Citizens the best time of their lives at the university.

“I feel very comfortable here, I didn’t think I would be free among unknown people, and although I came alone, I have already made several friends,” said a newly admitted student coming from Borsod-Abaúj-Zemplén county. Viktória Napsugár Viczek first wanted to be a doctor, but she didn’t get admitted at the first time, and in the last year she realized that she would prefer to be an ambulance officer. 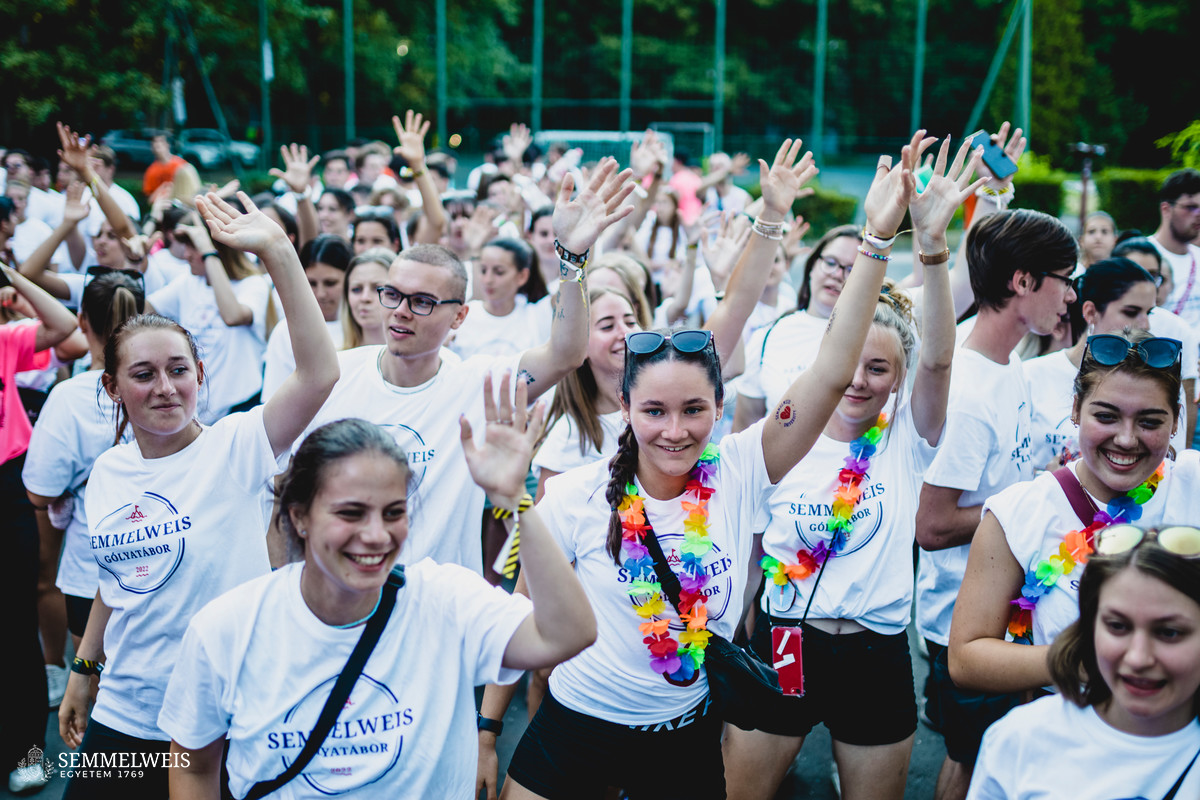 Emma Pietra from Pécs always wanted to be a pharmacist. She grew up in a family of pharmacists. Even though they lived in Pécs, her mother and grandmother both studied at Semmelweis, and they encouraged her to continue her studies here because the teachers were very good – they said to her.

Eszter Konyári decided to become a doctor in primary school, so she chose biology and chemistry. “I’m from Debrecen and I chose Semmelweis because I heard good things about it, I have relatives who went here, and I wanted to get away from home,” she explained. 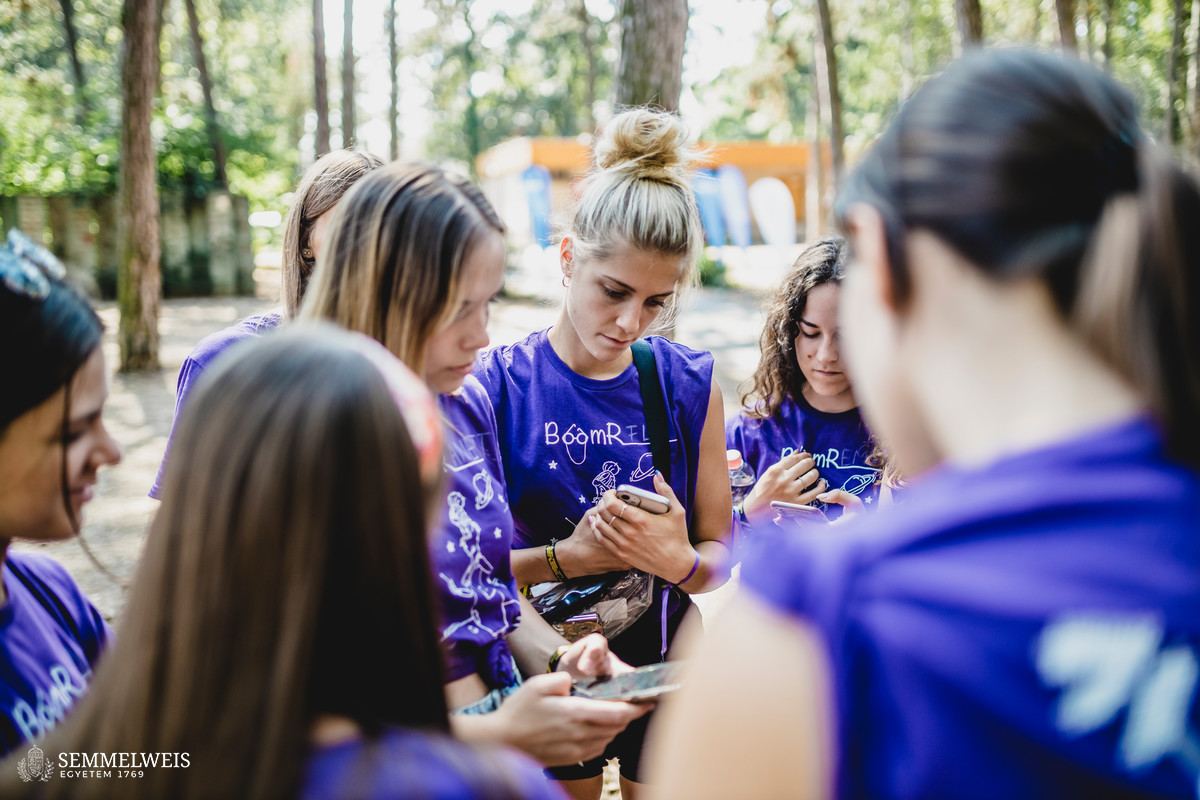 “Dear Freshers, dear future Semmelweis Citizens, I can see that the atmosphere is already very good, but it will be even better” – the rector started his speech. Dr. Béla Merkely congratulated all those present for having studied long, dutifully and enthusiastically to become students of Semmelweis University.

I think that the real task is coming only now. You have a tough 5-6 years ahead of you, but the profession you have chosen is worth the effort and the learning we will do together as a team in the coming years”, 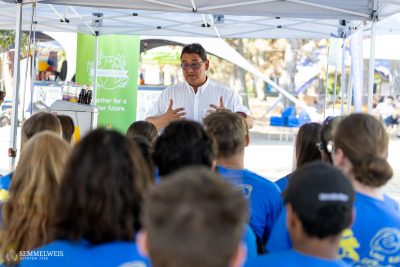 He said that the prospective first-year students came to one of the best universities in the world, and emphasized that according to various rankings, Semmelweis University has been improving its position lately, being in the top 1% of the world’s higher education institutions. The goal is to be among the top 100 universities worldwide and among the top five medical universities in Europe,” the rector told the freshers, assuring them that they would receive the best education, the best training at Semmelweis University.

Medicine is a team effort, a patient’s life never depends on individual performance, the members of the team must complement each other, Dr. Béla Merkely said in his speech, asking the students to be each other’s partners.

“Have a great time at Semmelweis University, and I wish you the best time of your life here,” the rector concluded, and after the opening ceremony he gave the freshers a gift bag containing a gourd, a hat, a raincoat and other small items.

The rector also gave a special greeting to the international students, stressing their commitment to providing the highest quality education. He stressed that this year all faculties are starting with higher enrollments than in previous years, with a 20% increase in the number of students enrolled in German and a 10% increase in English.

Most of the foreign students who were admitted were enrolled in general medicine and dentistry, but there are also some pharmacy students. There are relatively few common classes for students of the different training language programs, but this number may increase in the future.

The university also offers scope for individual research. It is important for students to do research alongside their studies, and this is supported by all the lecturers and the increasingly modern infrastructure. The rector also encouraged students to get involved in university sports and, if they can, to take part in the Medic’s Cup, which Semmelweis University won last year for the first time in the last 20 years.

As part of the sports day, the rector refereed a football match, donated blood and visited the Semmelweis Health Development Center’s campsite. 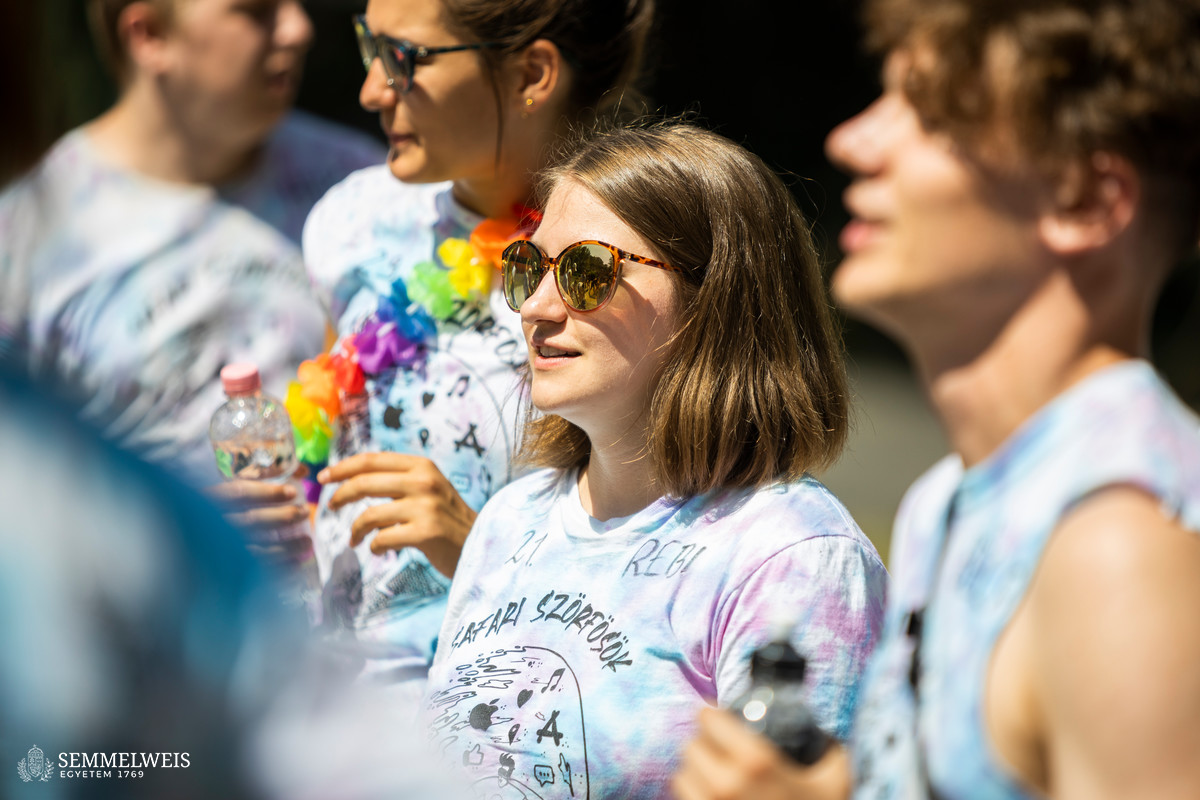 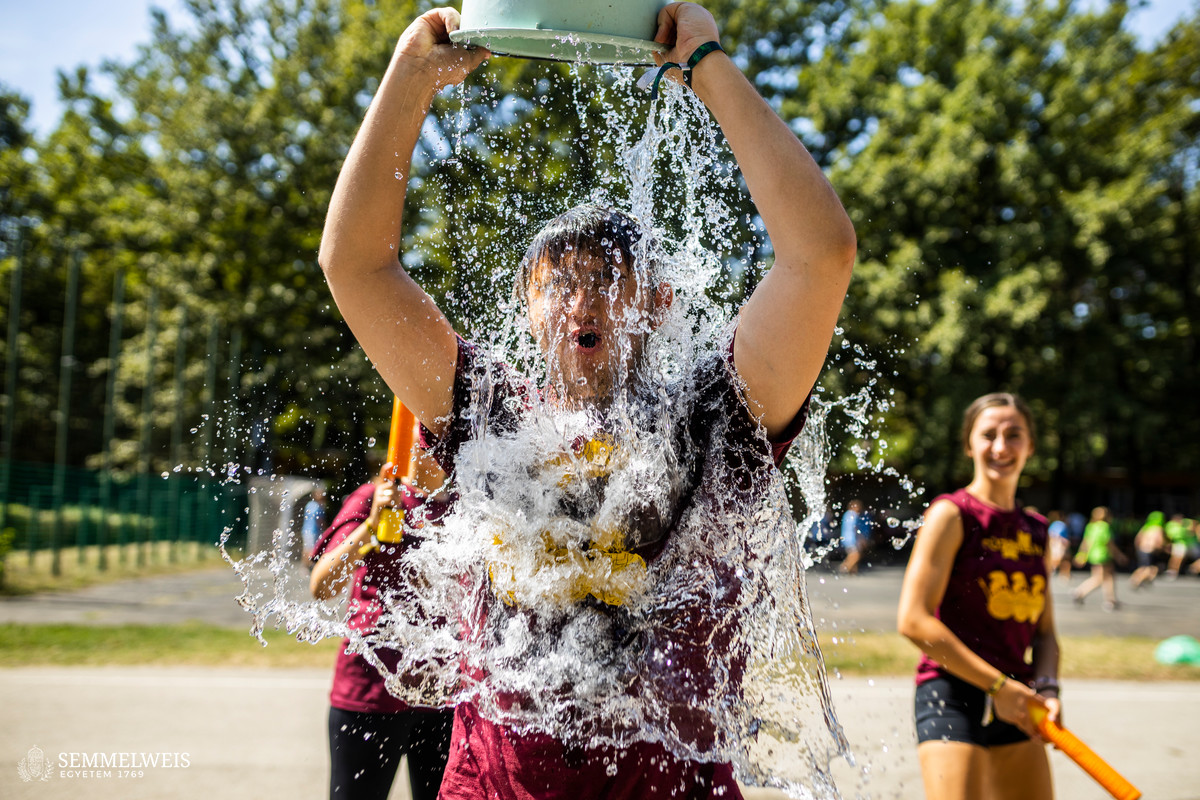 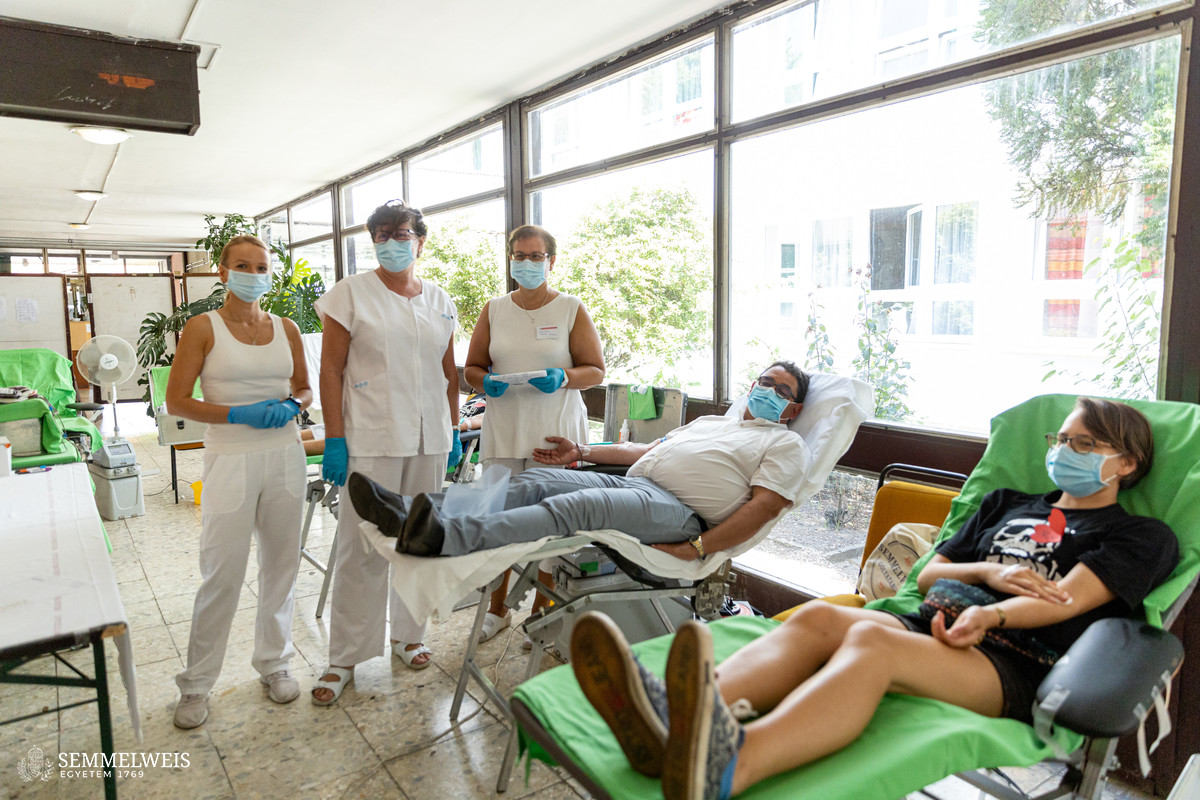 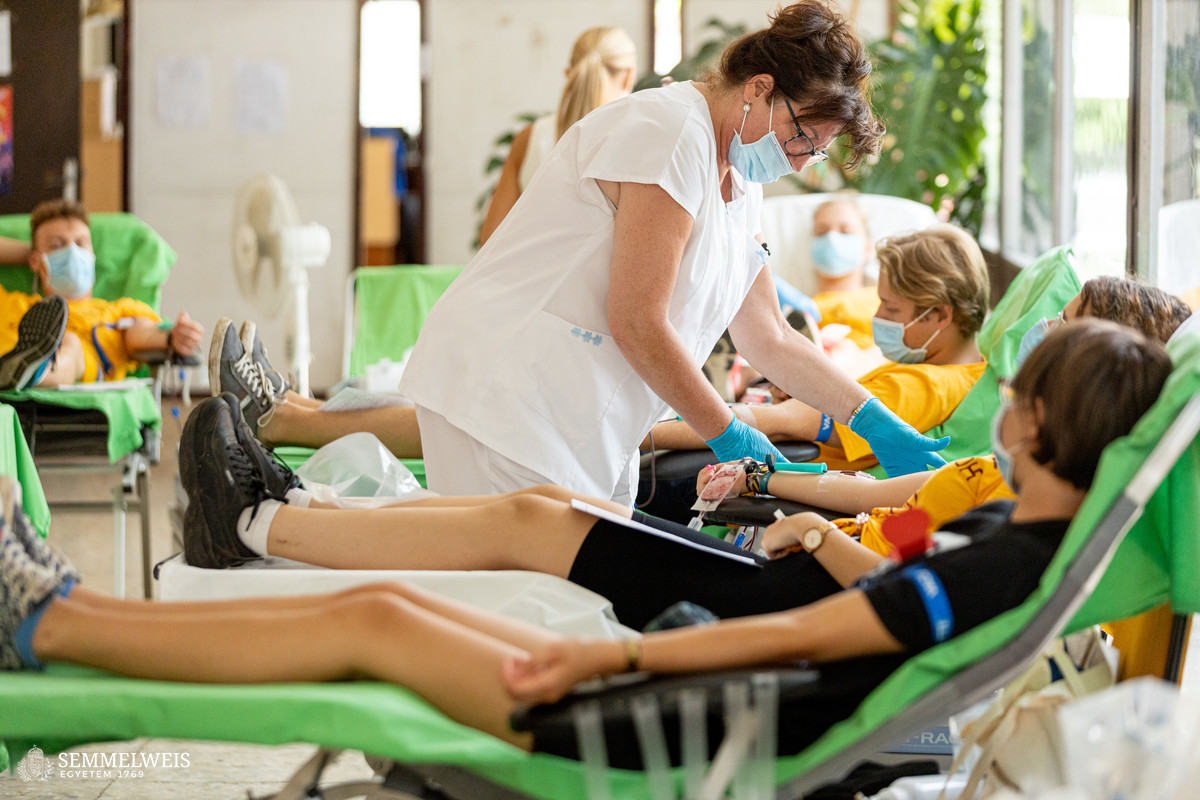 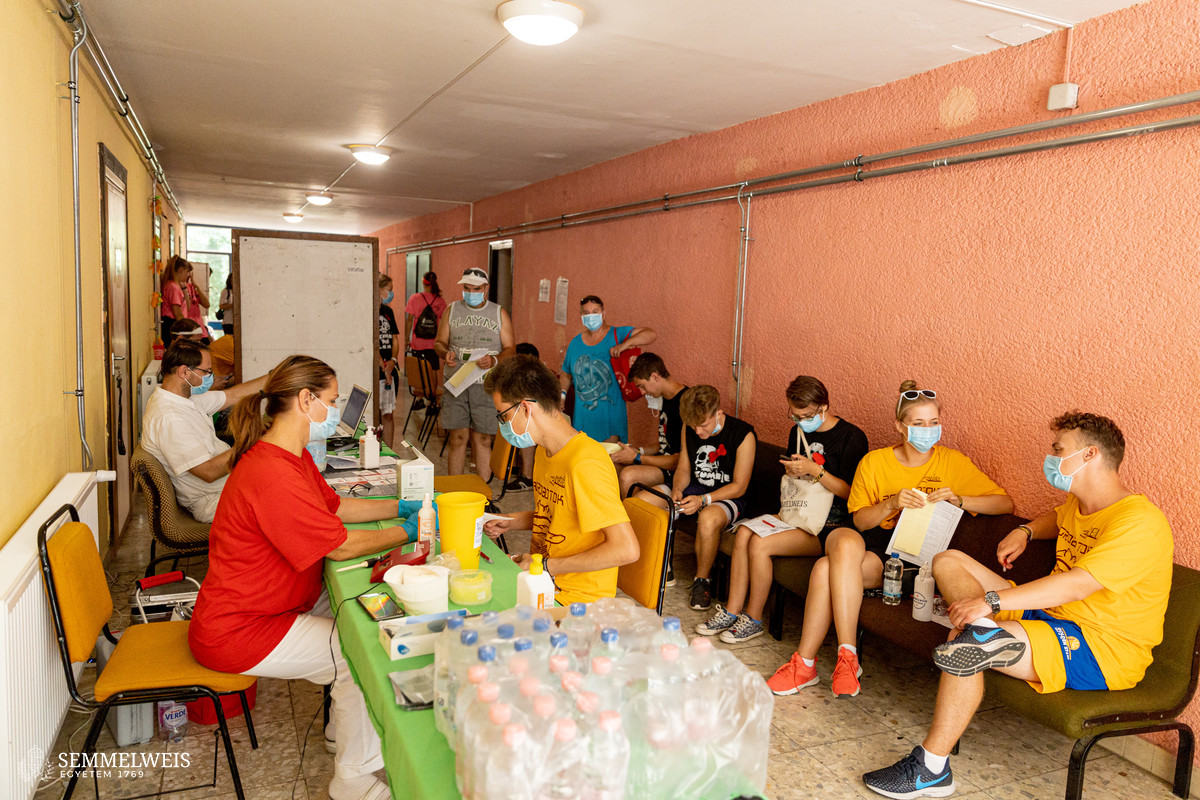 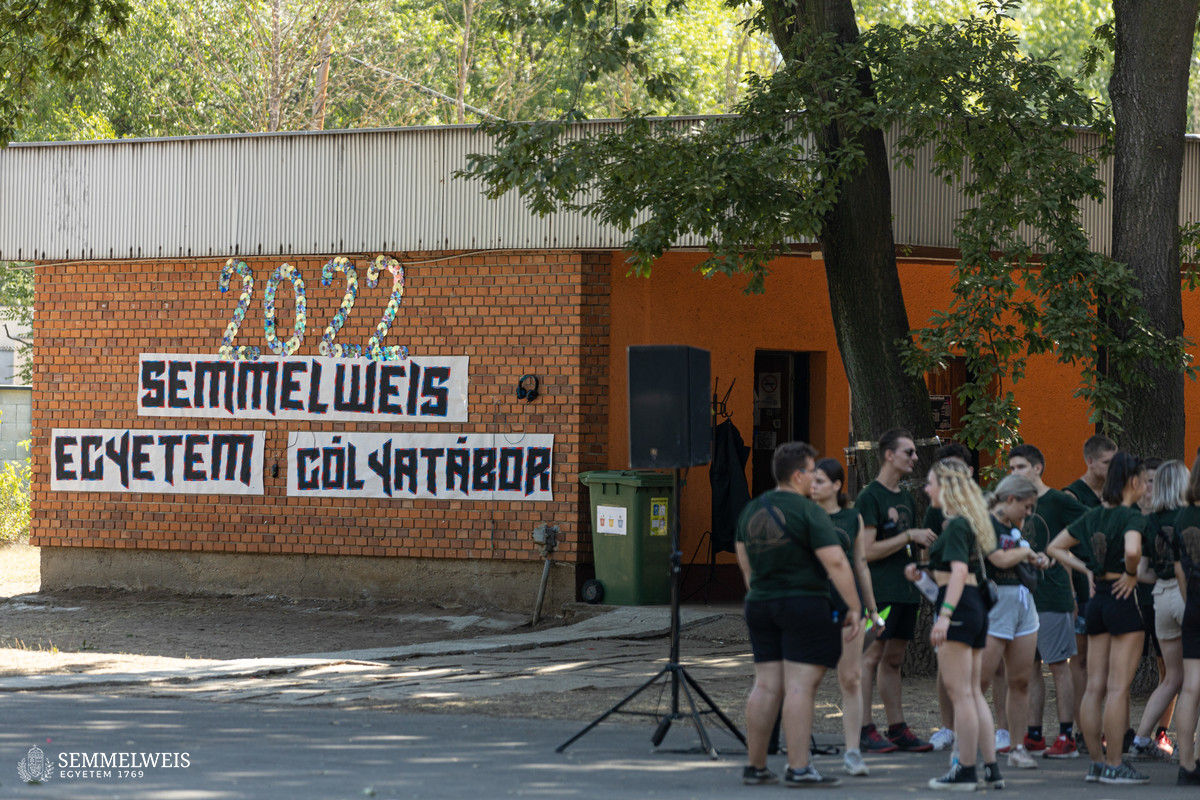 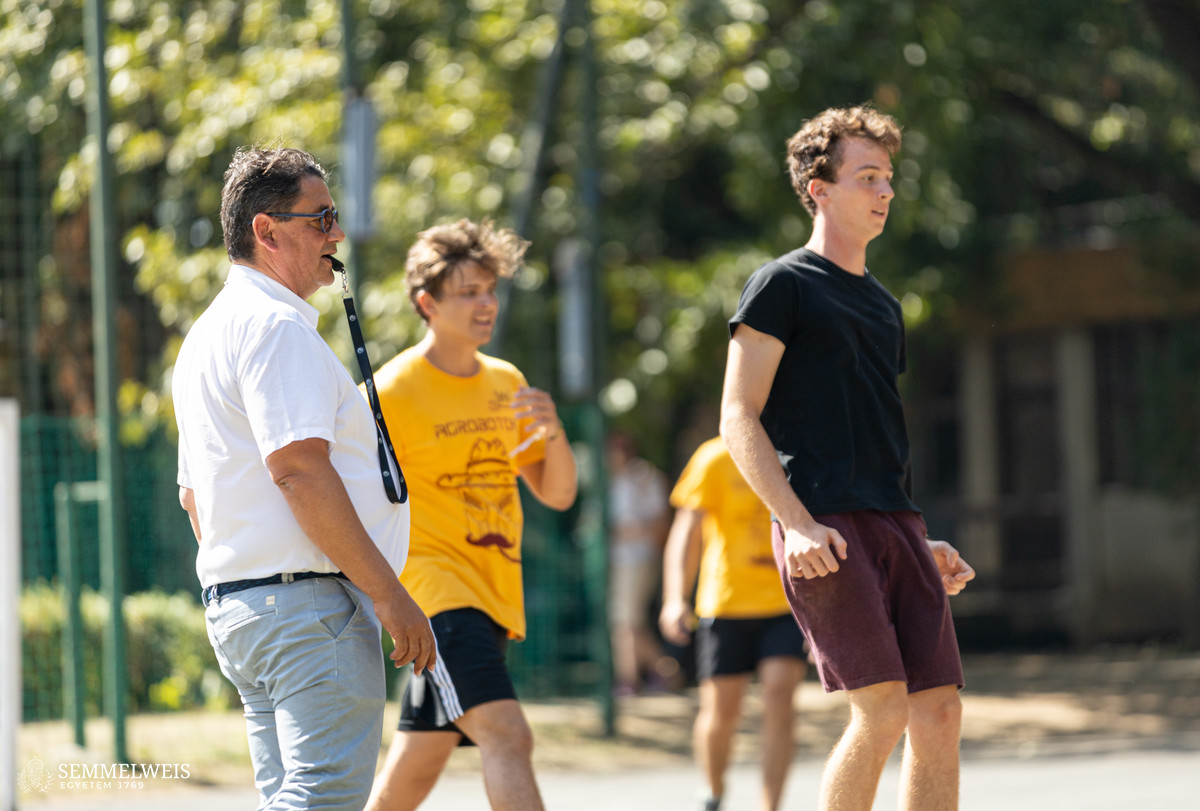 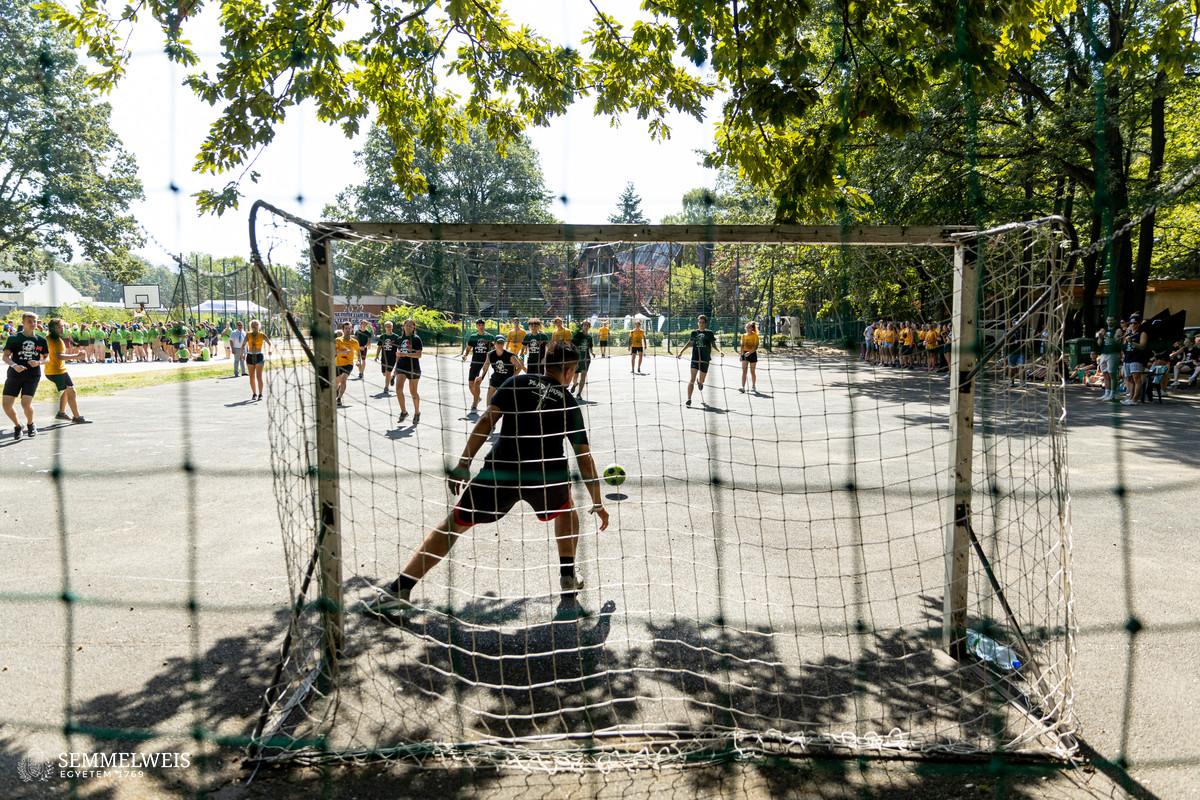 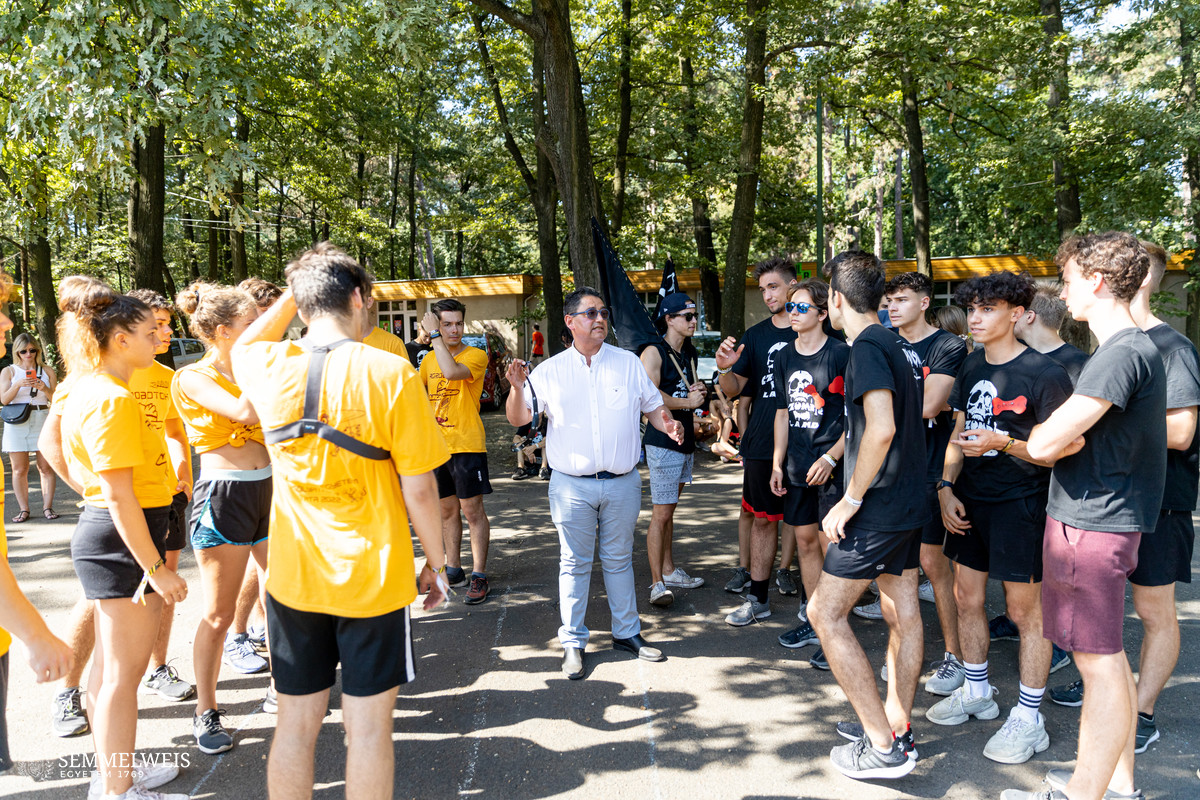 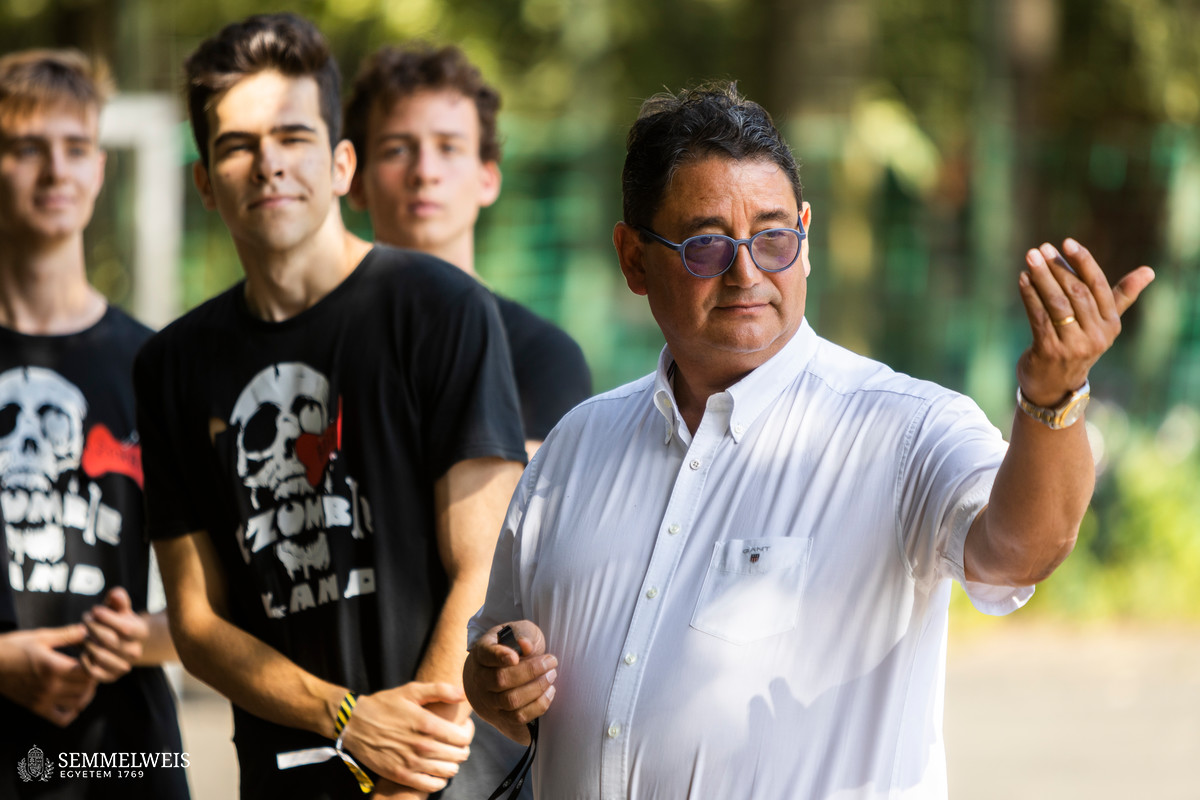 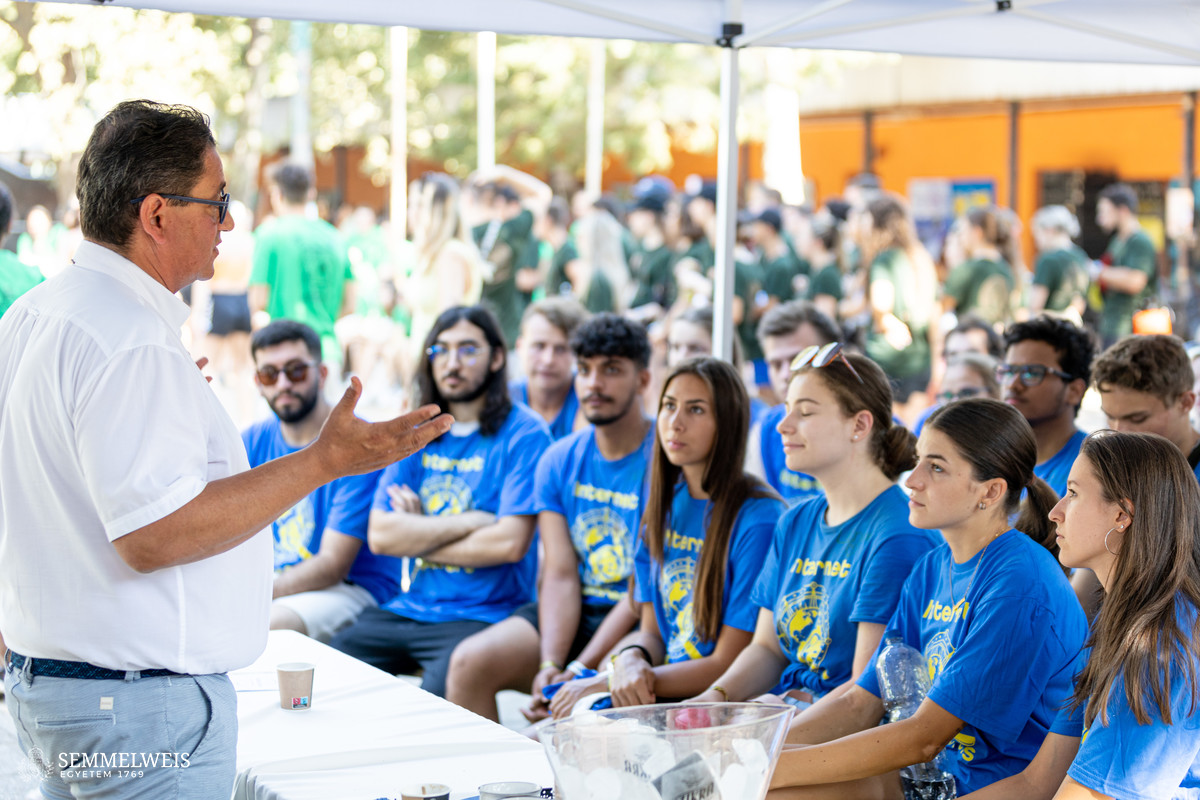 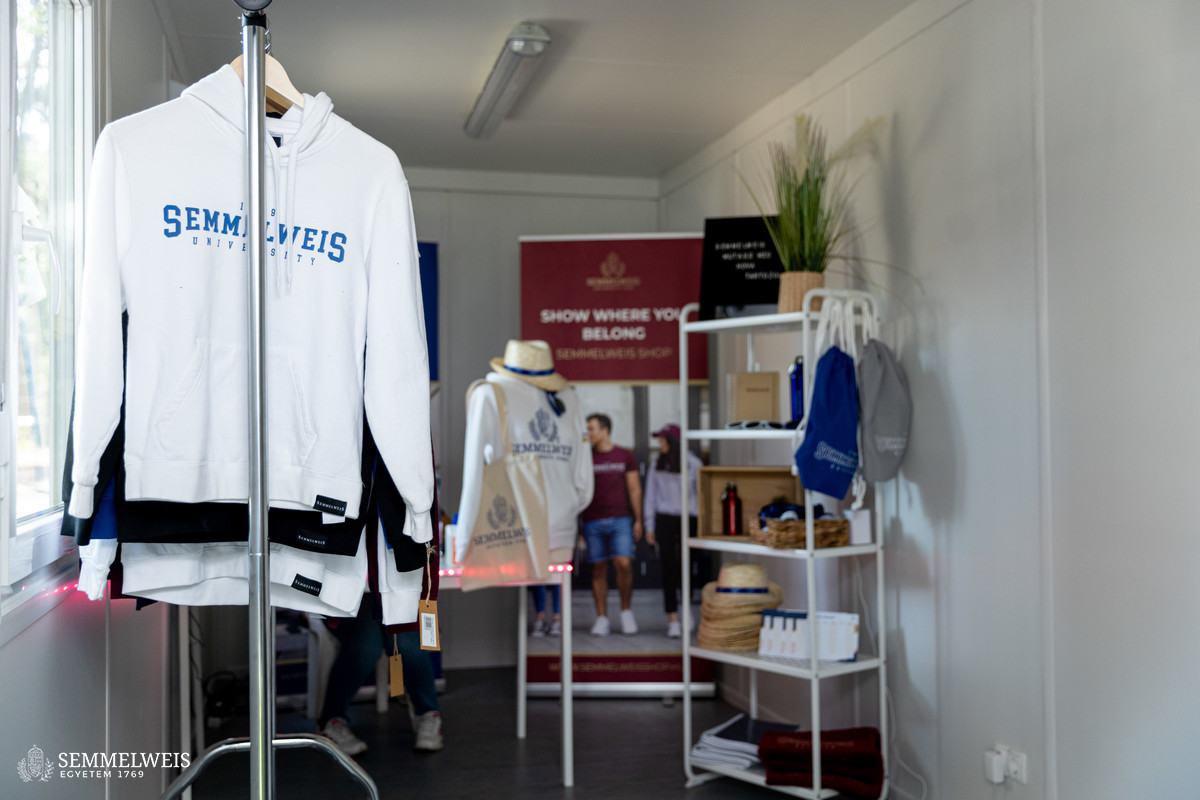 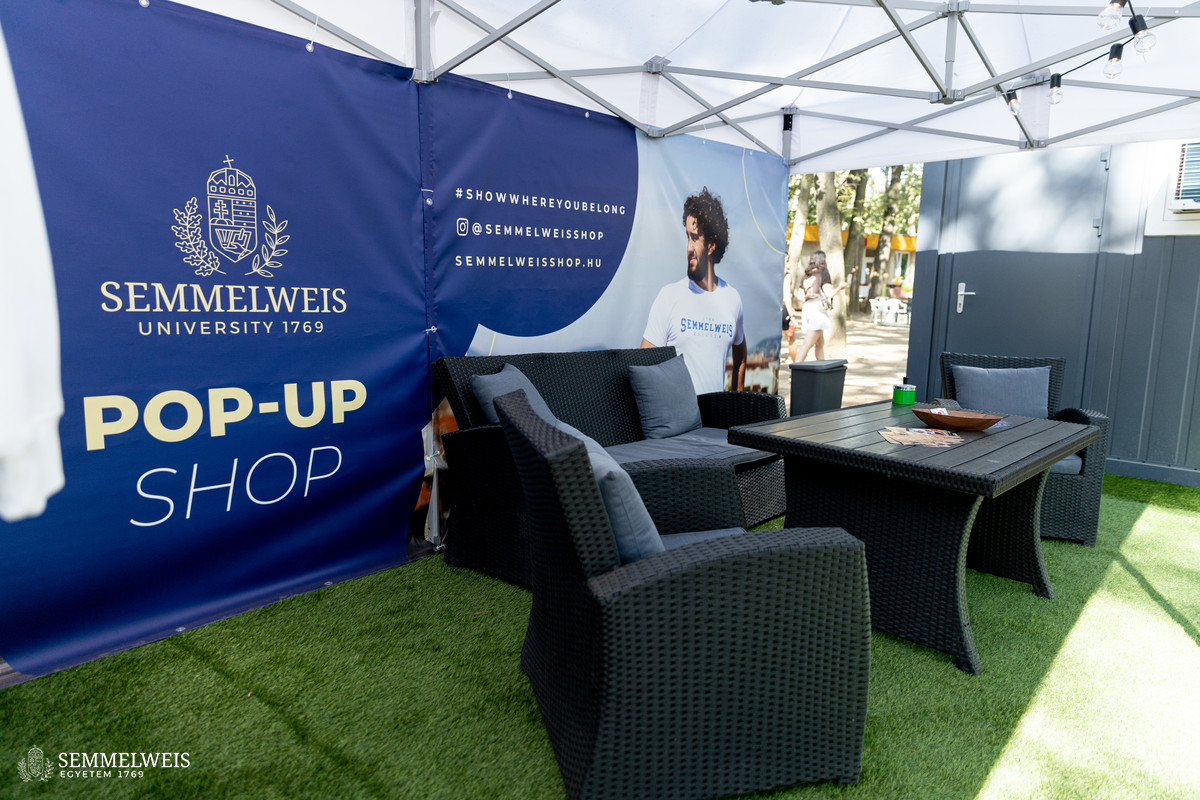 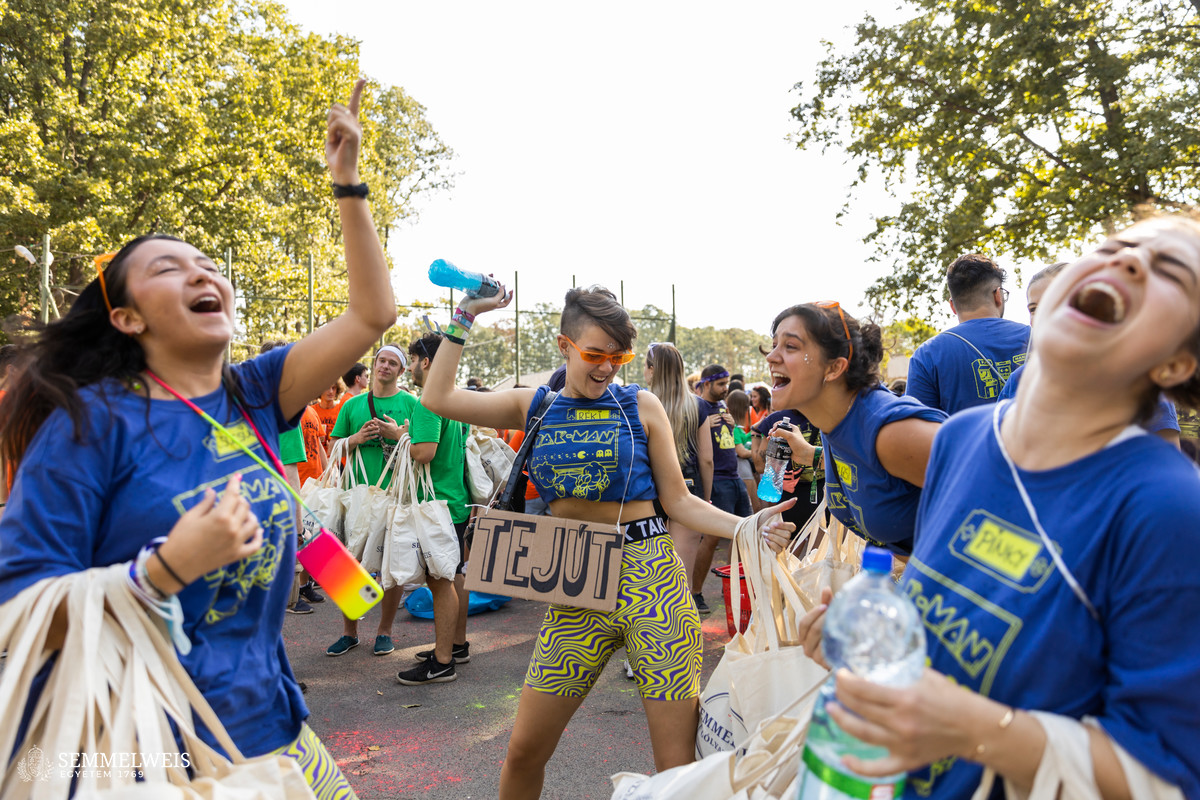 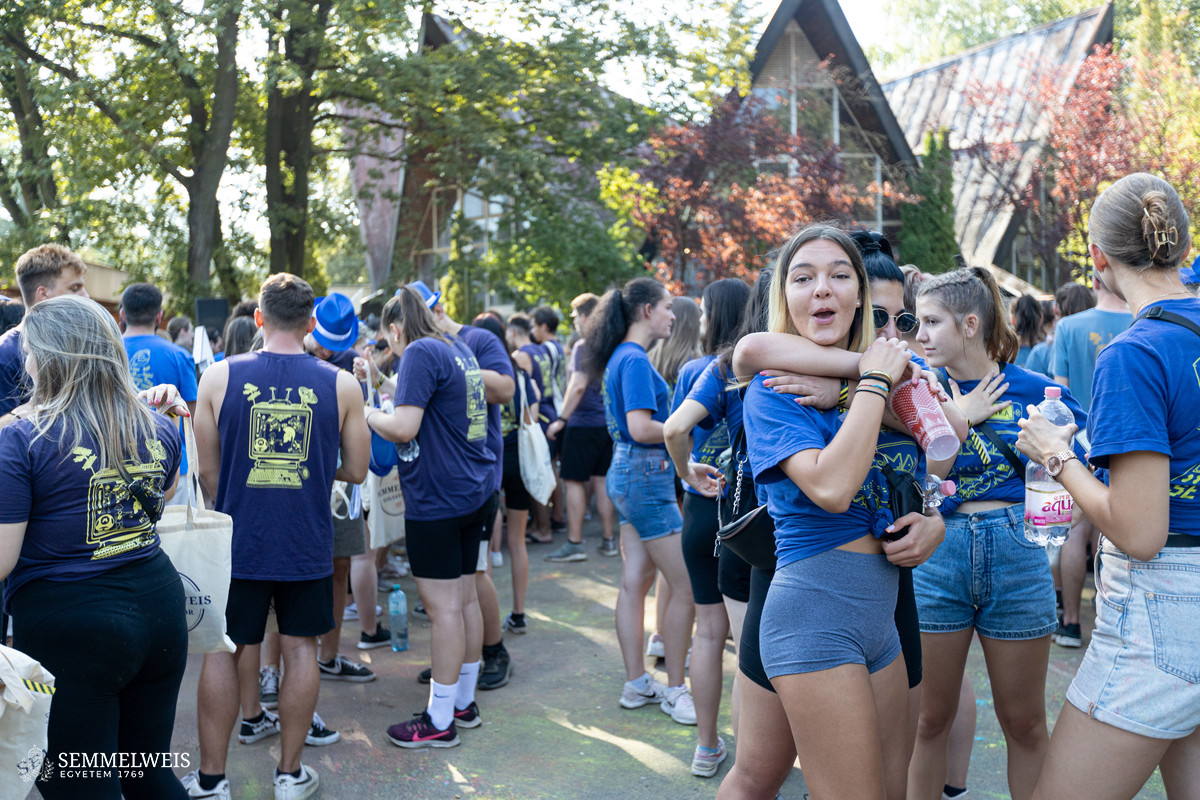 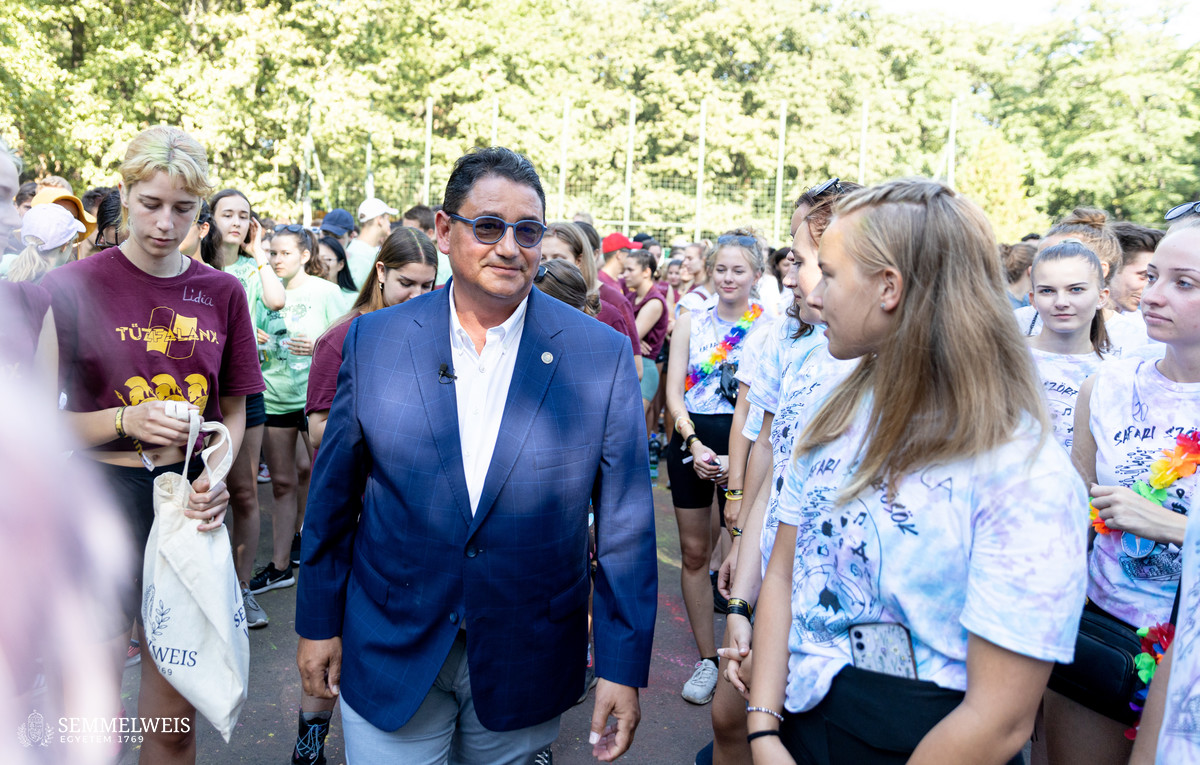 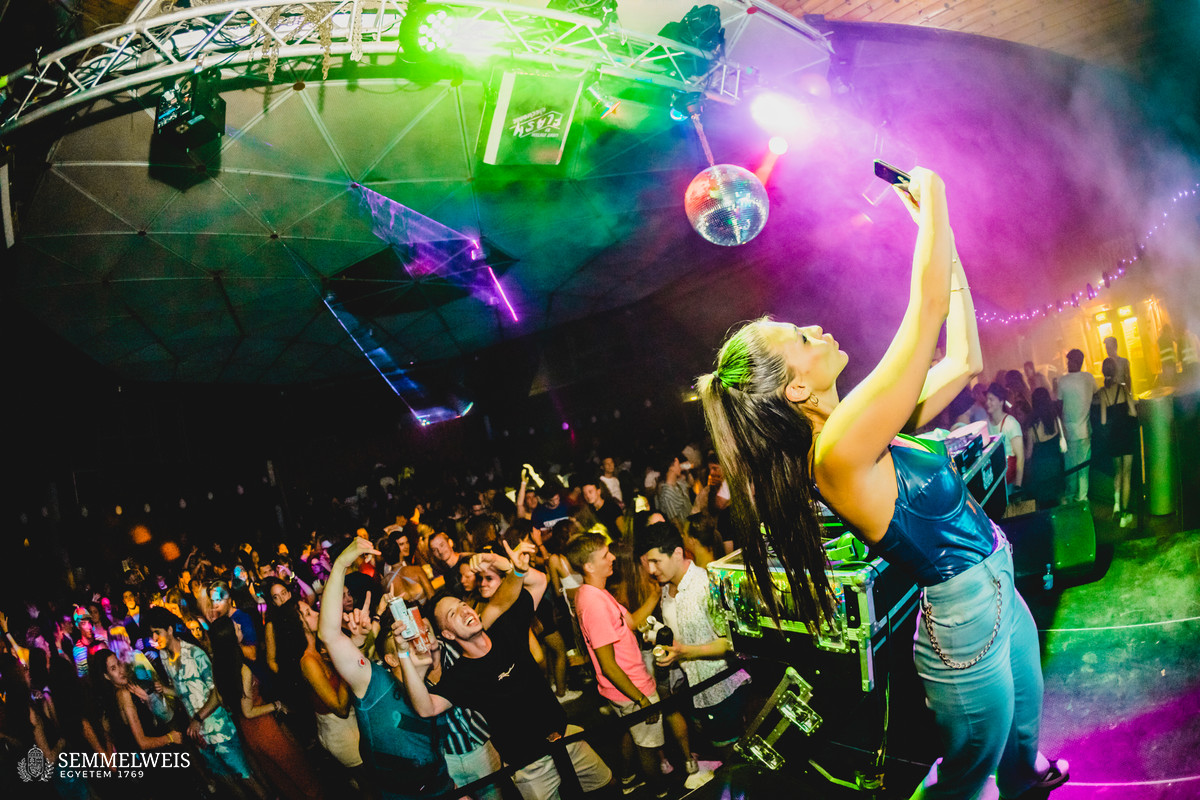 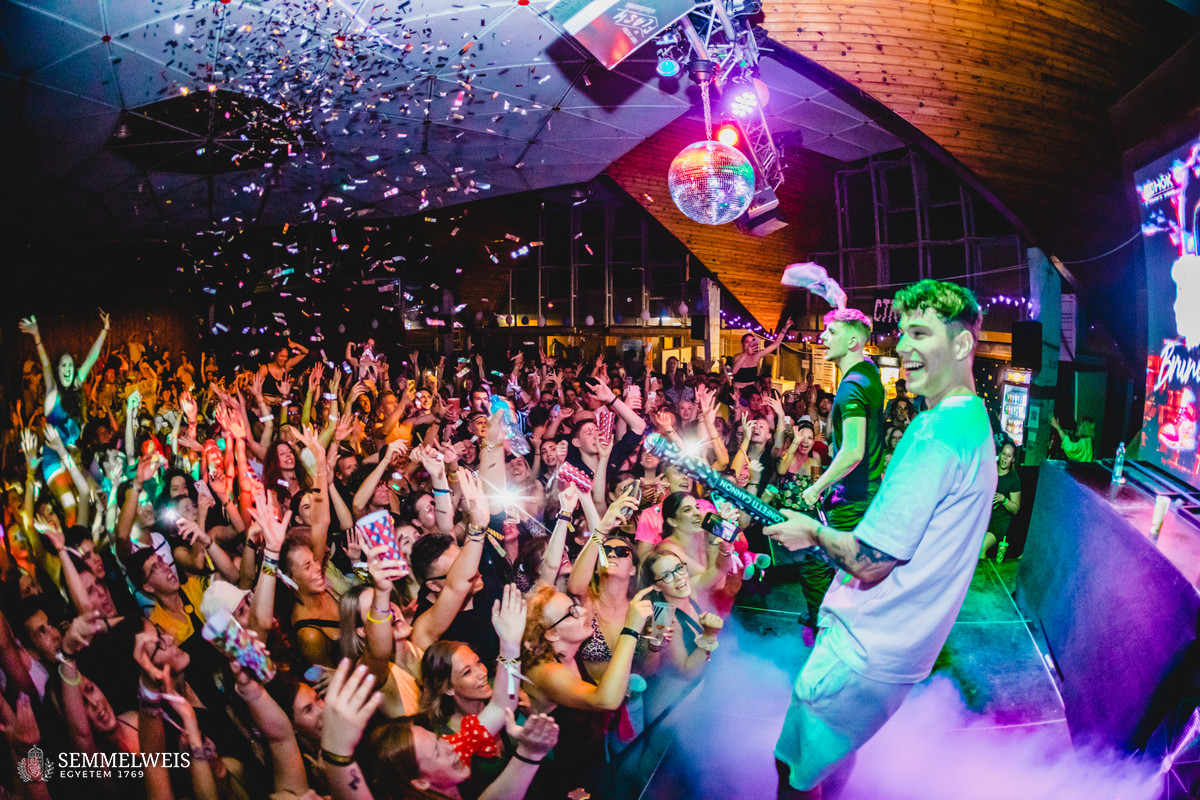 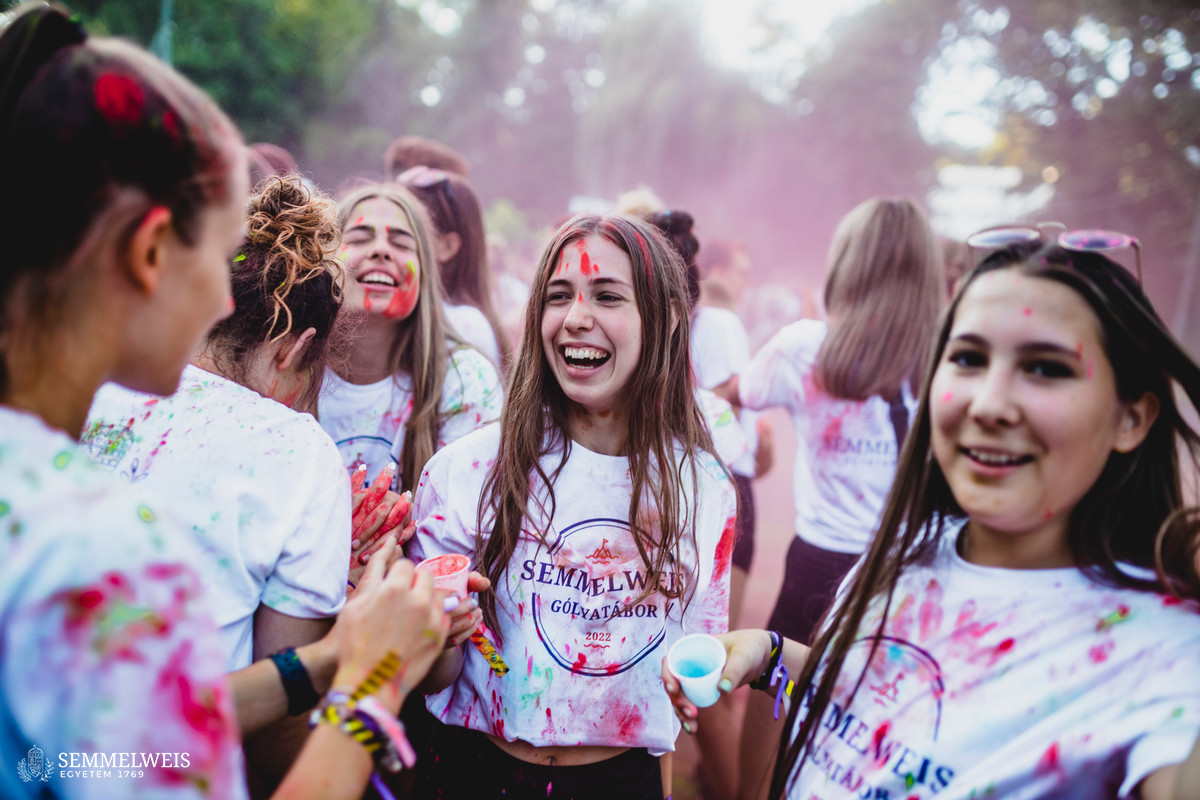 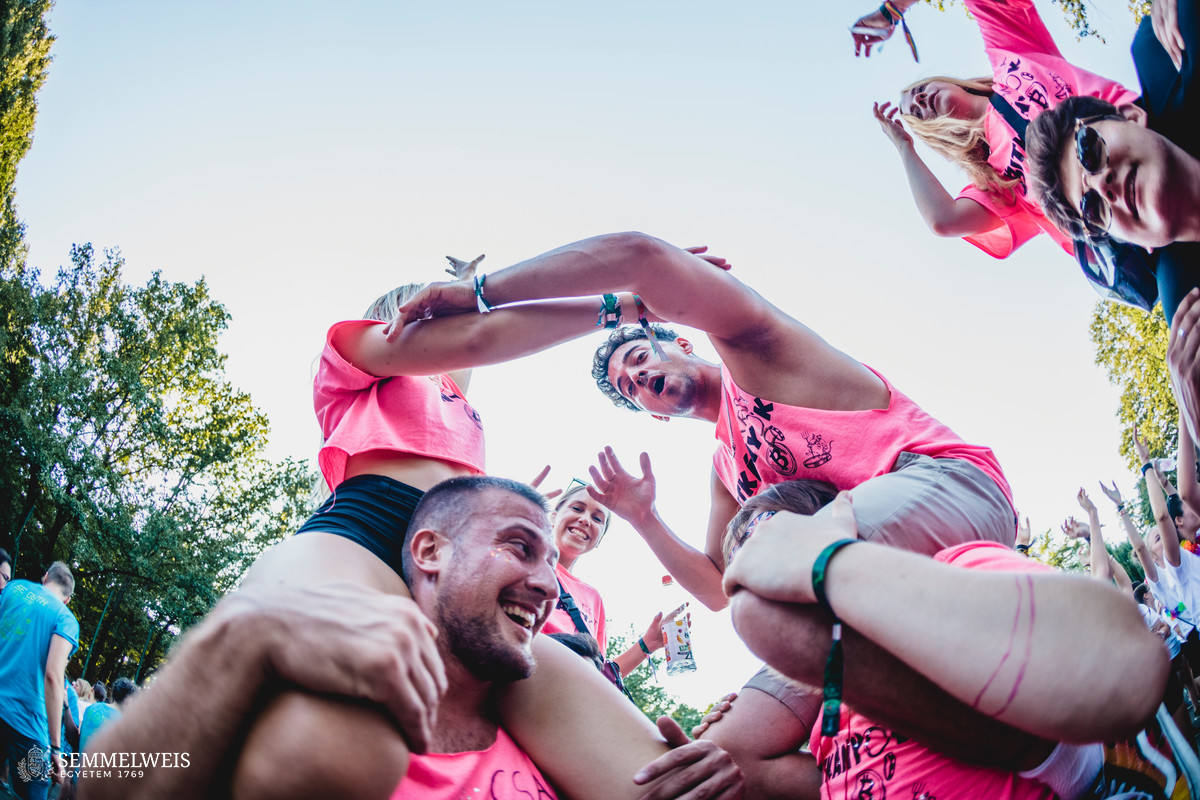 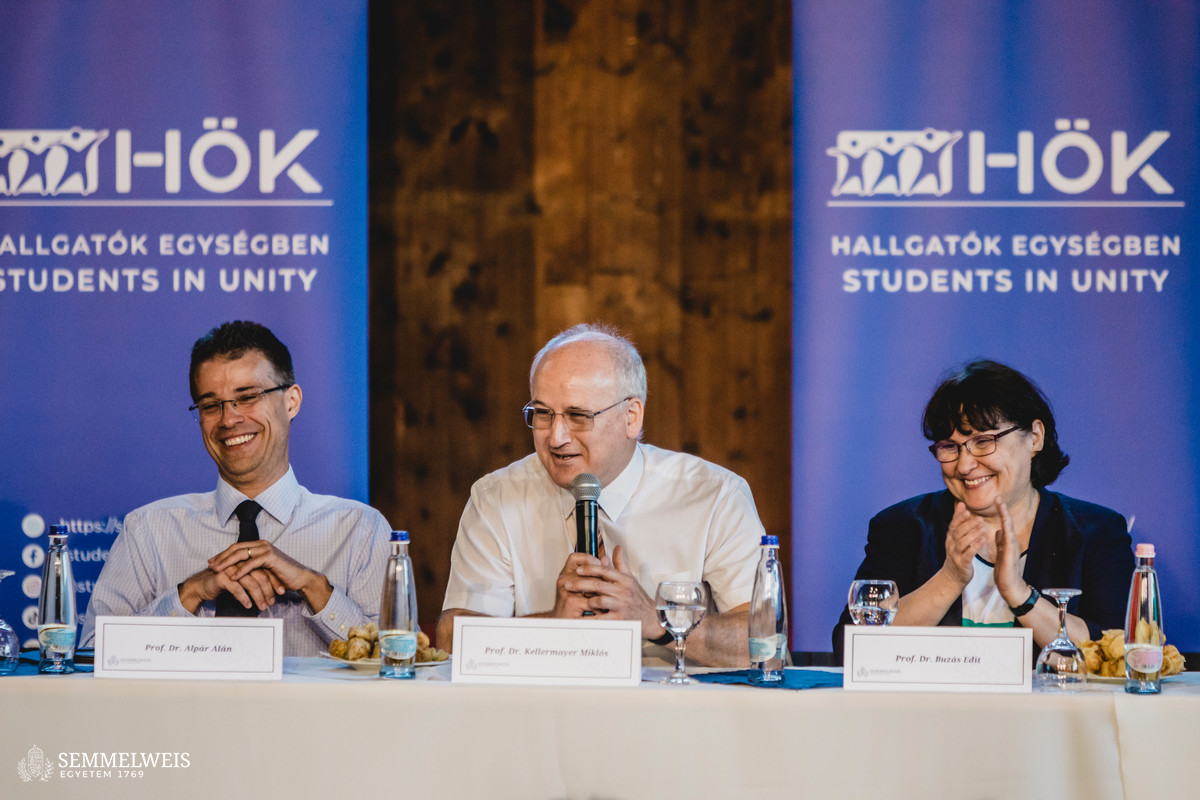 Several of the admitted students come from outside Europe. Shanti Chang (South Korea) was looking for a university after finishing her studies in India. “US courses were overpriced and I didn’t want to study in the United States anyway. I looked at many institutions around the world. Semmelweis University offers an excellent scholarship opportunity for international students, which I won. As I didn’t want to burden my parents with tuition fees, this was an important factor of my choice,” he explained.

Emre Mustafa Kizilirmak from Turkey will start the English language training at the Faculty of Medicine in September. “The community was important to me and to study in a liveable city, both of which I had heard good things about from people I knew. I also chose the university because of the prestige of the degree,” he said. 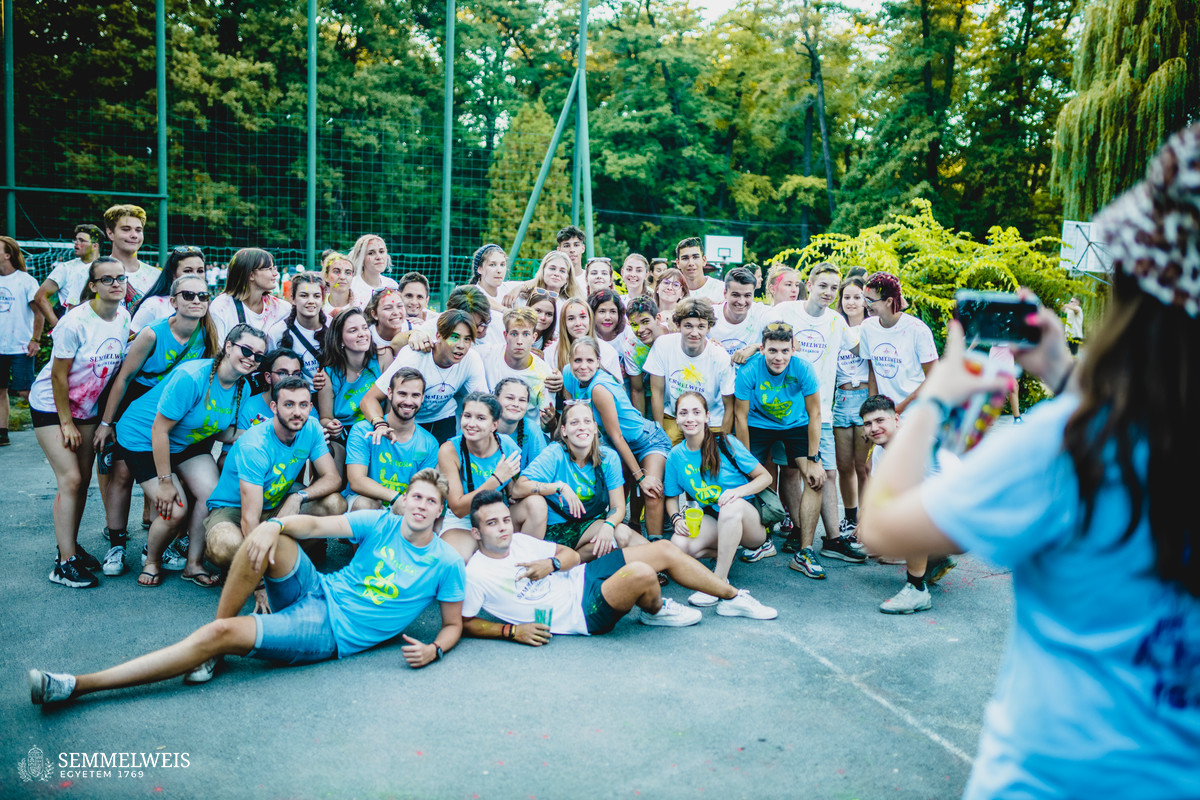 The more than 800 newly admitted students left for the Tata Youth Camp after a gathering in the Bikás Park in Budapest, on a special train decorated with Semmelweis 250 stickers. The organizers this year were again the Semmelweis University’s Student’s Union (HÖK) and the Instructor Self-Active Group (IÖCS). On the first day, the freshmen were welcomed by Bálint Tripolszky, President of the HÖK and Kata Kismarjai, President of the IÖCS.

Bálint Tripolszky stressed that no matter how different the newly admitted students present, they are bound by at least one thing: that they will become Semmelweis Citizens. He also mentioned that both the university and the HÖK are working to ensure that they receive the highest quality education and become members of an excellent community. This year’s camp is cyber-themed, the decorations, team names and T-shirts reflect this, and the instructors have written the marches and inspiring texts in this spirit,” said Kata Kismarjai Kata, President of the IÖCS. On the first day, the freshmen, divided into 23 teams, got acquainted with the camp rules, took part in a fireworks display and a freshman initiation, and on the second day, they had the opportunity to hear lectures on the topics of education from the faculty instructors in a forum organized jointly with the HÖK, and also had the chance to talk to the graduates in a smaller group. 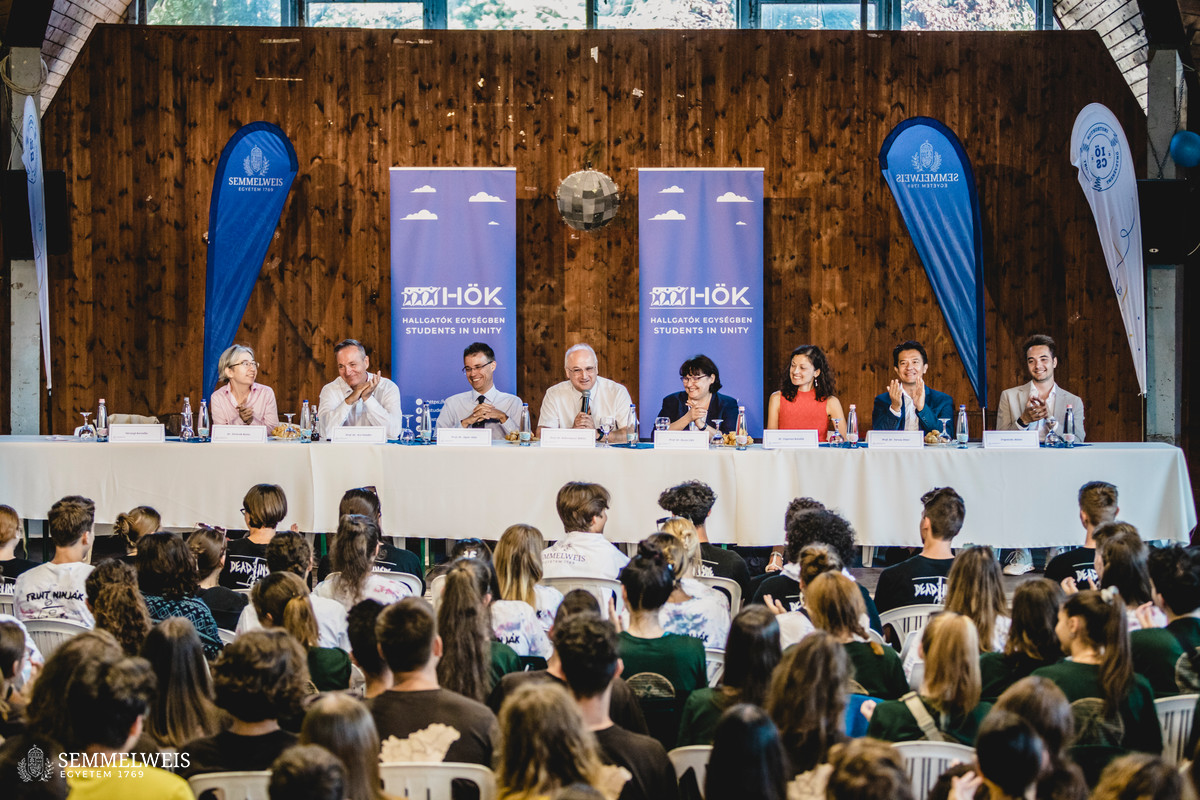 The main organizers were Gergely Tege Apáthy and Fanni Siklós from IÖCS, while from HÖK Loretta Nyirády and Benedek Bakó were in charge of the organization.

The number of first-year students participating in this year’s event was even higher than last year, and the camp in Tata was fully booked,” said Tege Gergely Apáthy and Fanni Siklós. More than 800 freshmen attended the six-day event, and the number of international students almost doubled compared to 2021, with nearly 30 students registering for the camp.

“We have created the day-by-day division and program of the freshers’ camp at the time together with the Institute of Behavioral Sciences and we have not deviated from the main points since then, since the event’s arc from the first day to the last is a well-developed system that serves to familiarize the freshmen not only with their own group and their immediate peers, but with the whole Semmelweis University. This way, during the six days, they can get closer to all the faculties of the institution and make acquaintances from all over,” explained Gergely Tege Apáthy, a fourth-year student of the Faculty of Medicine. “The programs of the fifth cooperation day are the closest to my heart: this tunes students from different faculties to work together as a real team – thereby preparing them for what it’s like to be a member of a healthcare team,” he emphasized. Fanni Siklósi, a third-year student at the Faculty of Health Sciences, highlighted the musical performance in addition to the cooperation programs. 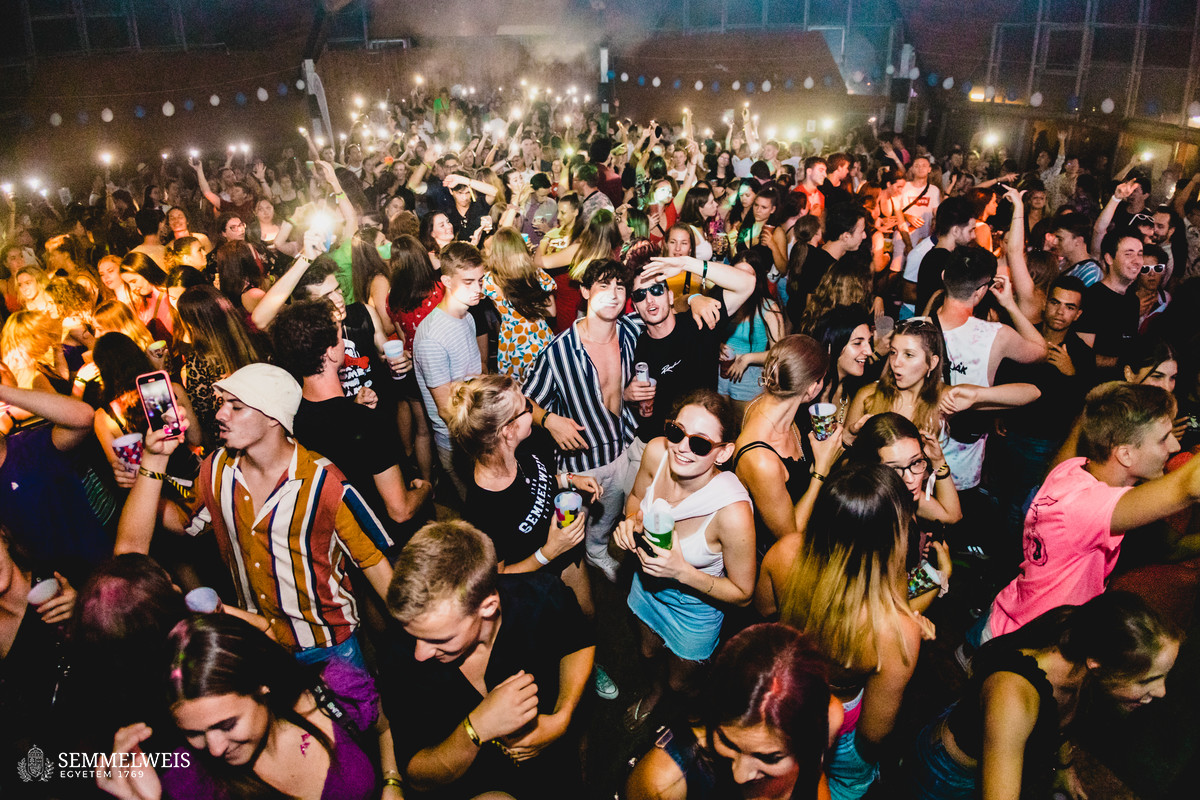 “The creativity and energy that the organizers and directors put into this is very inspiring. Not only do they write and choreograph the dance, but they also put the costumes together themselves,” she pointed out. She said that she received a lot of positive feedback from participants during the camp, and the fact that the students are having a good time is a great motivation. “There’s no better feeling than when freshers come up to us, thank us for the programs and tell us how much fun they had,” she said. Fanni Siklósi explained that the organization of the freshers’ camp started in December, the six-day event was made possible by the cooperation of 3-400 people, and that the members of the IÖCS do all this work as volunteers year after year. 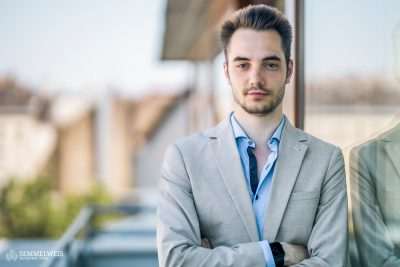 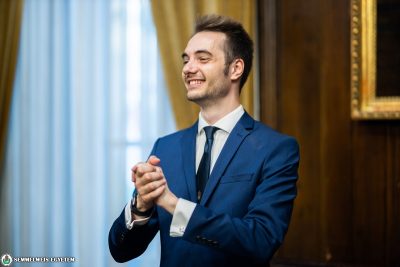 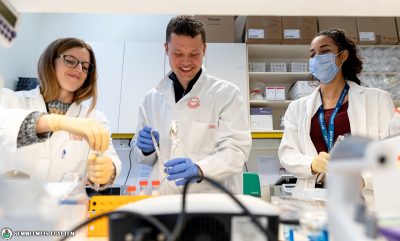