Number of vaccines administered at Semmelweis University - 19. October 2021
More information
Semmelweis University was the first in Budapest to perform Hyperthermic Intraperitoneal Chemotherapy on a 47-year-old woman with advanced ovarian cancer. The new method may have a major role in the therapy of ovarian cancer. In Hungary approximately 1,300 women get diagnosed with ovarian cancer every year, 70% of them in an advanced stage of the disease. HIPEC was funded by the National Health Insurance Fund of Hungary on the grounds of equity. The special treatment is expected to significantly improve survival in ovarian cancer patients.

The first HIPEC treatment in Budapest was performed by the surgeons of the Department of Obstetrics and Gynecology and the Department of Transplantation and Surgery. The therapy is a supplement to the surgery treating tumors spreading through the peritoneum, which metastasize  mainly inside the abdominal cavity. Following the six-hour-long surgery and the 10-day-long hospital stay the patient could finally return home. 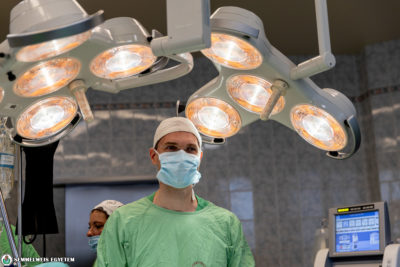 “In the first phase of HIPEC, all visible tumors are removed, and the combined operation of the affected organs is performed (peritoneum, parts of the small and large intestines, spleen, gall bladder, ovary, uterus, diaphragm parts, liver tumors), which may last up to 4-6 hours. Afterwards, the patient receives 1-2 hour-long abdominal chemotherapy (hyperthermia) with a continuously heated and circulated chemotherapy solution at 41-43 Celsius degrees. While under anesthesia, heated chemotherapy solution is circulated continuously through the patient’s abdominal cavity, causing the temperature in the area to reach 41 to 43 degree Celsius – explained Dr. Szabolcs Máté, Head of Department of Obstetrics and Gynecology at Semmelweis University.

With the direct application of the warm chemotherapeutic solution in the abdominal cavity, higher drug concentration can be achieved in residual and difficult to detect tumor cells. Hyperthermia uses heat to damage and kill cancer cells and it enables the drug to penetrate in the surface cells, thereby increasing the effectiveness of chemotherapy treatments. Chemotherapy will have only moderate systemic side effects, as the medicine level in the blood stays low. The key to successful HIPEC is the successful surgical removal of visible abdominal tumors and any nearby tissues to which the cancer may have spread.

The effects of abdominal chemotherapy was first examined in the 70s, later research started on its hyperthermic form in the 80s. American surgeon, Dr. David Sugarbaker introduced the new surgical technique, the so-called cytoreductive surgery, which involves the removal of all organs and tissues affected by the tumor. The combination of HIPEC and cytoreductive surgery was first used in gastrointestinal tumors and tumors originating in the appendix. Since its introduction, the effectiveness of the technique has been tested in the treatment of a number of different types of tumors (colon, gastric cancer, pancreatic cancer, ovarian cancer). The most promising results have been achieved in ovarian cancer patients.

The treatment with the 42-degree Celsius liquid increased the chance of survival by 30% and improved life expectancy by one year compared to patients who had undergone only organ removal surgery.

The surgery at Semmelweis University was preceded by considerable preparation. The surgical team performing the procedure have many years of experience working together as a team. Recently they have participated in a special training focusing on the special surgical technique at the Policlinico Universitario Agostino Gemelli in Rome, one of Europe’s largest healthcare centers.

“The intervention was performed using the modern RanD Performer HT system. The new procedure will not only improve the quality of gynecological oncology patient care, but may also be potentially applied to treat other types of cancers affecting the peritoneum. In addition, Semmelweis University will be able to participate in international trials in the future,” added Dr. Szabolcs Máté, head of department and Dr. Gergely Huszty, assistant professor of the Department of Transplantation and Surgery.

Dr. Nándor Ács, professor, director of the Department of Obstetrics and Gynecology pointed out that with the professional lead of Dr. Szabolcs Máté, the two teams once again demonstrated the strength and professionalism of their cooperation during this utterly complex surgical procedure, which required multidisciplinary expertise and high quality operative knowledge. The help of the medical team of the Department of Anesthesiology and Intensive Therapy was essential to the success of the operation.

Complex procedures are also supported by the 1st Department of Pathology and Experimental Cancer Research.

The department is planning to enroll at least ten new patients in the therapy program over the next year. According to the plans of Dr. Máté, In the near future HIPEC-treatment will also be available for patients coming from other healthcare institutes. 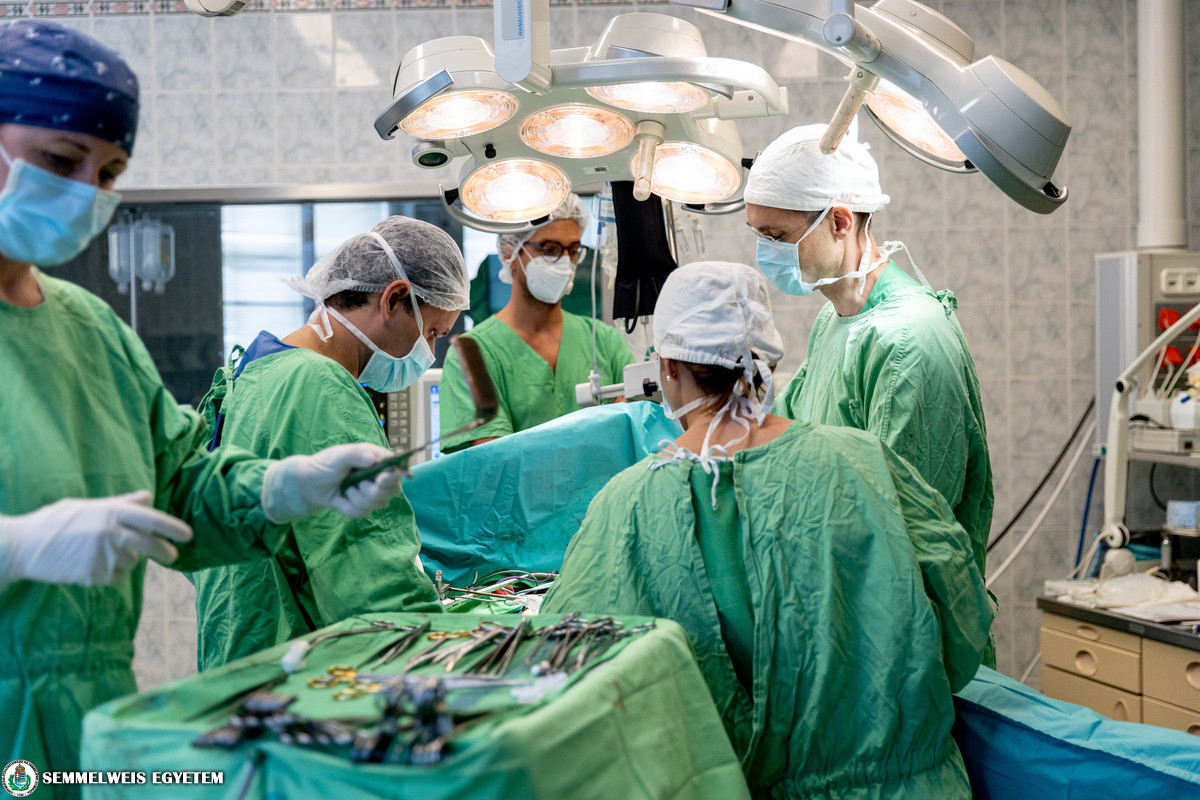 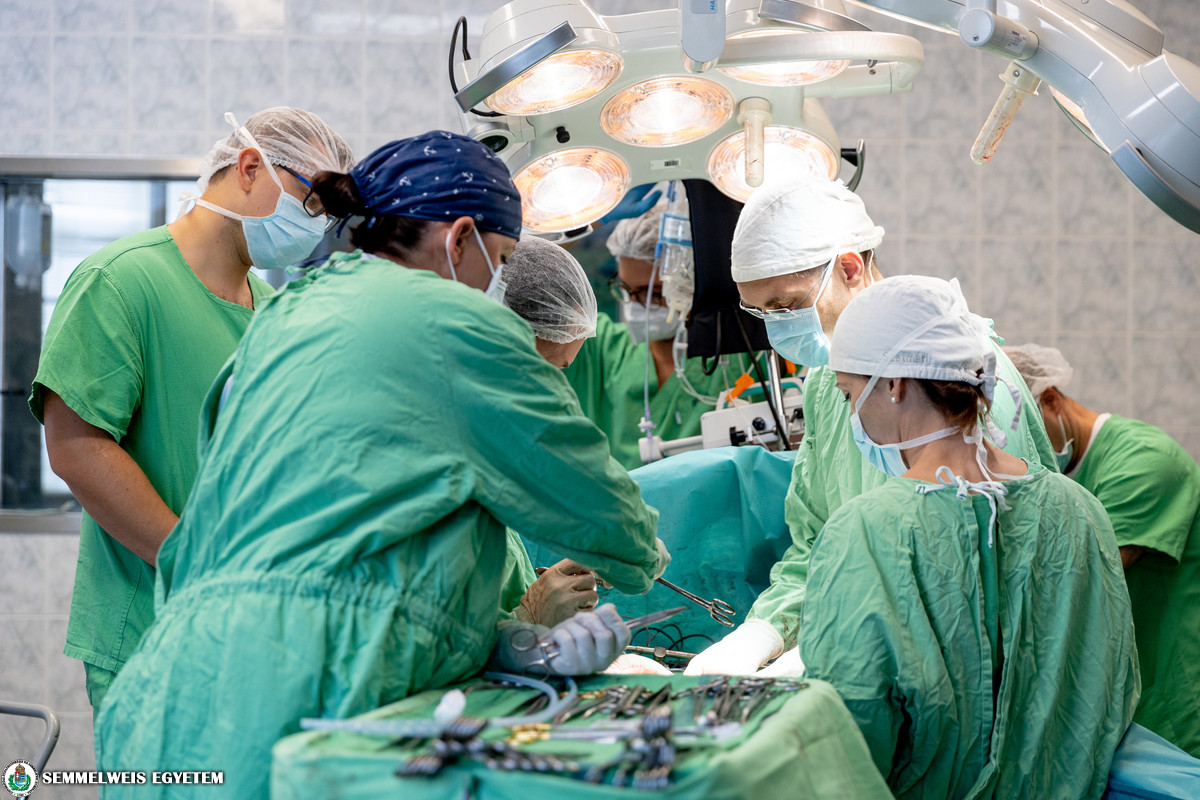 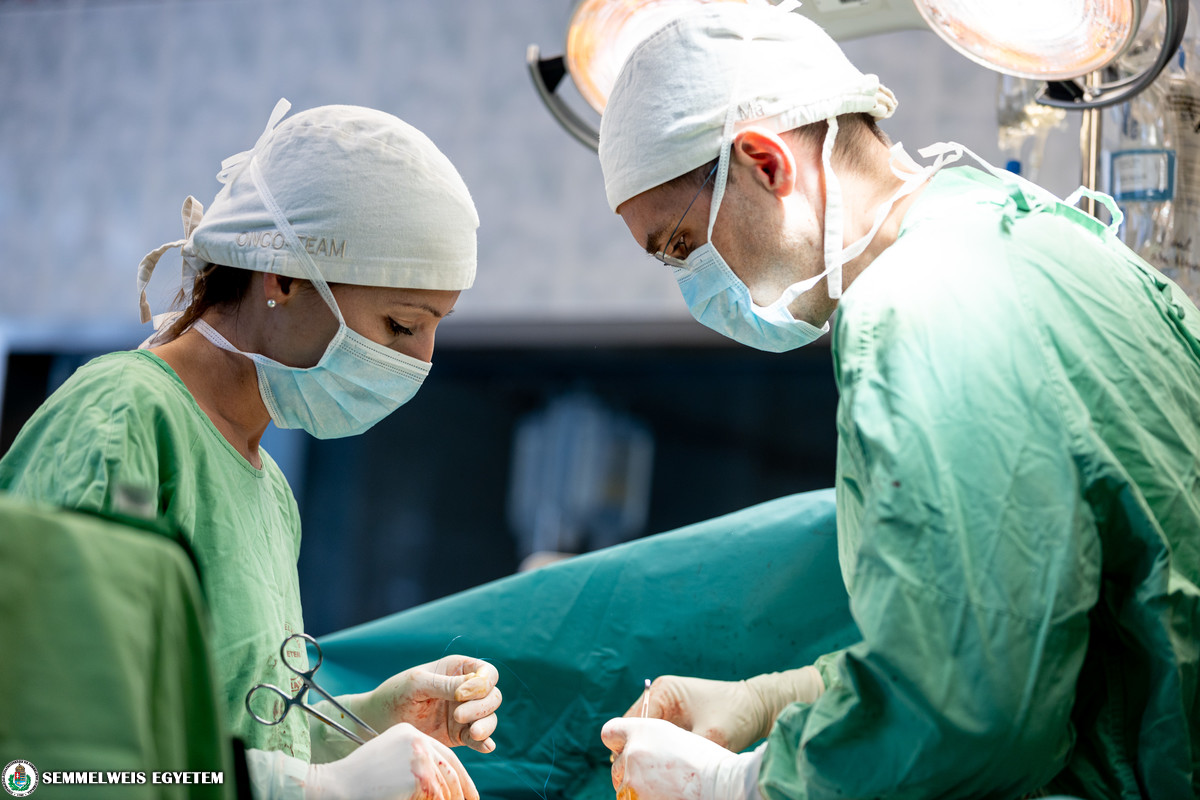 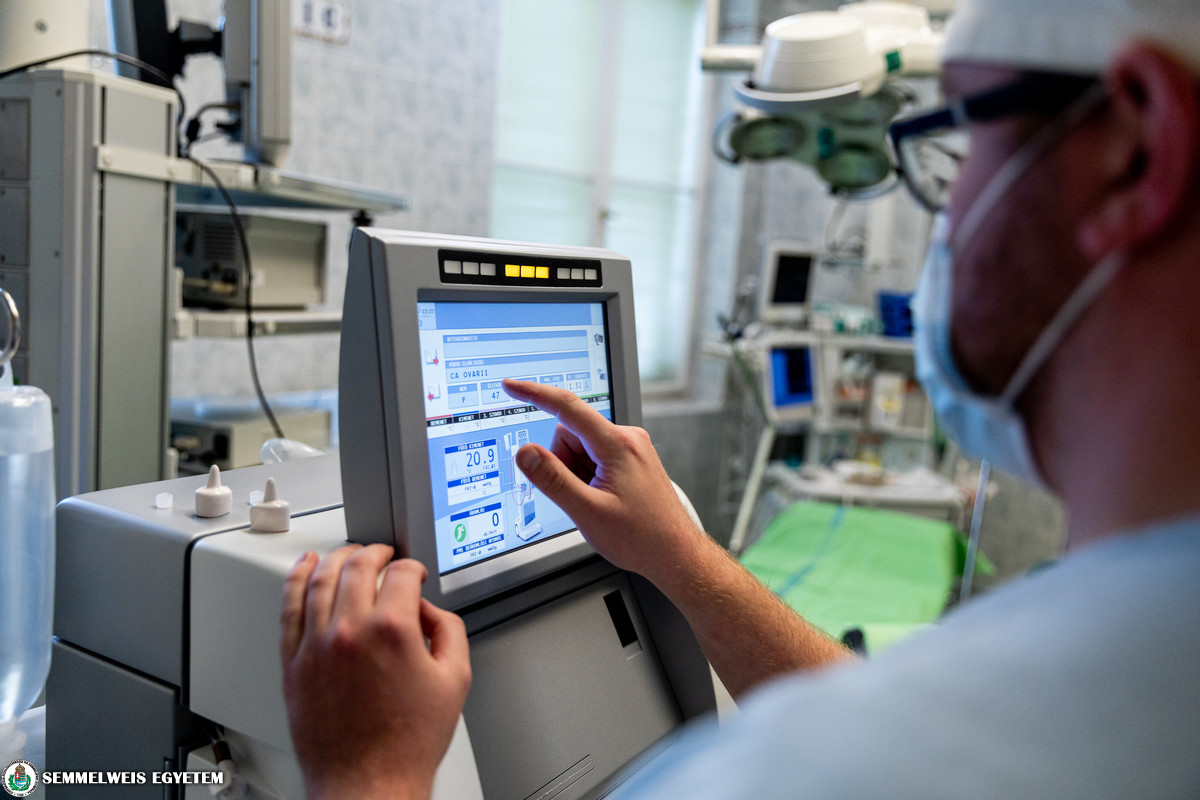 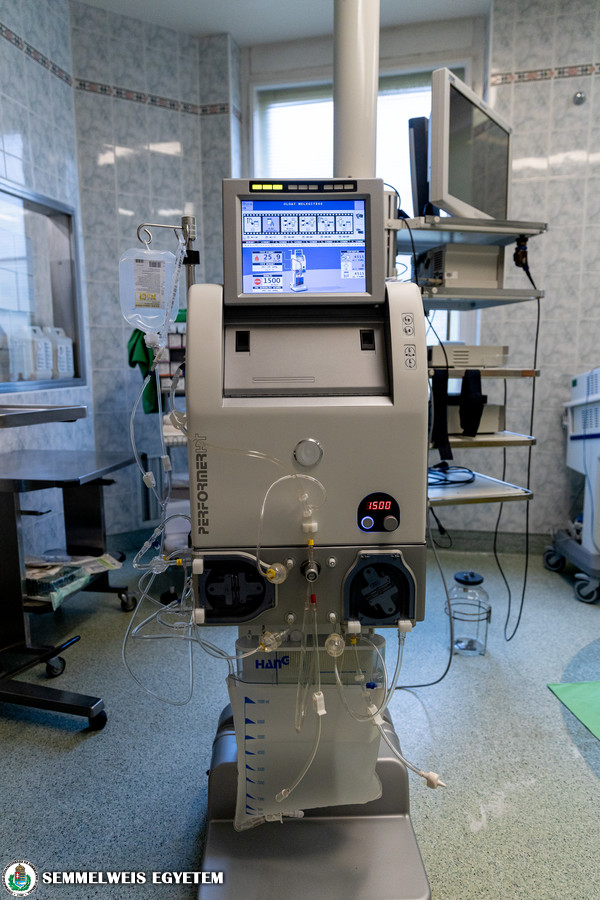 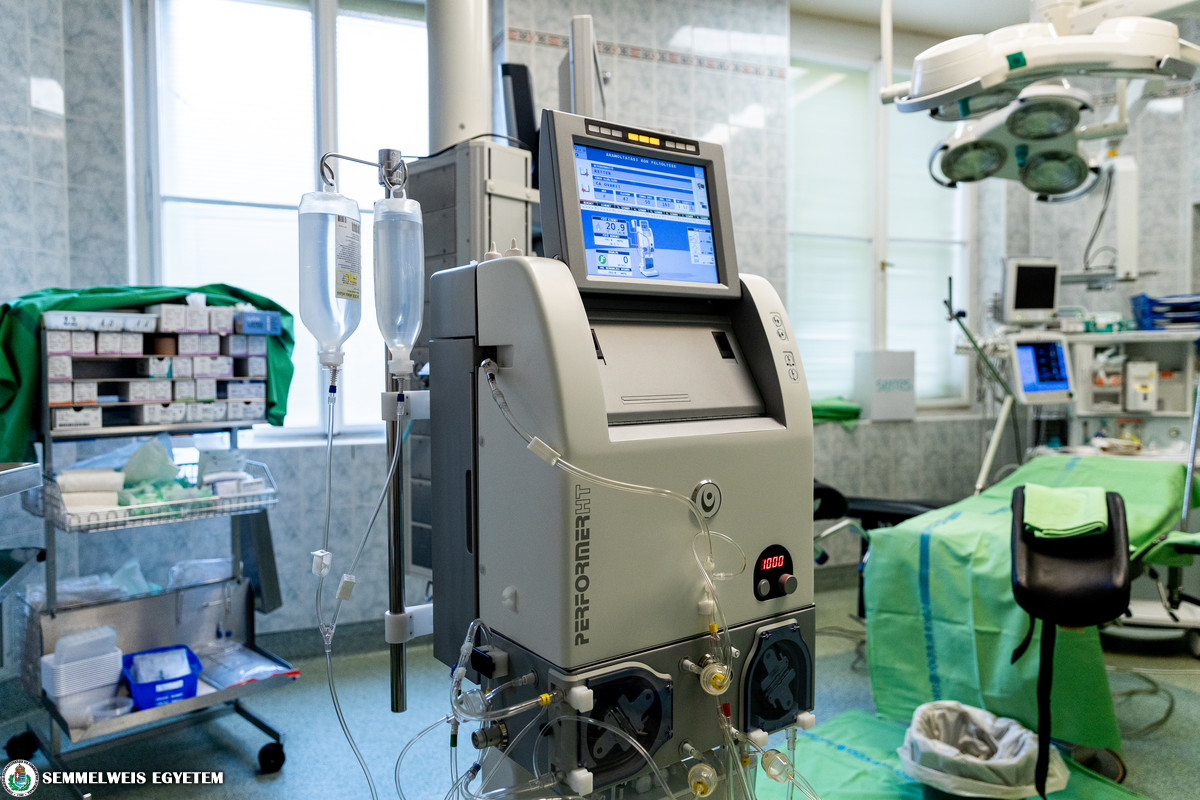 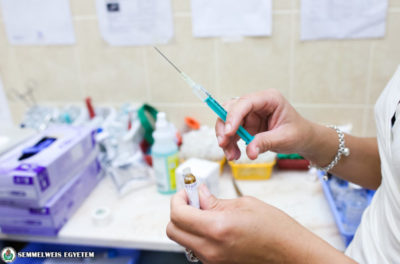 Breakthrough in treating a rare childhood disorder at Semmelweis University 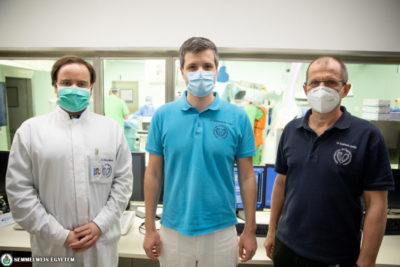 Semmelweis Aortic Center: the most serious cases treated in the collaboration of different disciplines 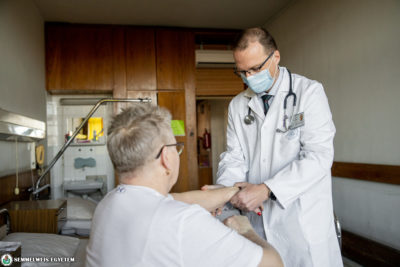