h
A delegation of four from Showa University, Japan visited Semmelweis University to discuss possible opportunities of cooperation between the two institutions. In addition to the introduction of the two universities, cooperation in the fields of research and education were discussed.

Dr. Béla Merkely, Rector briefly introduced Semmelweis University and the Faculties of Medicine, Pharmaceutical Sciences, Dentistry and Health Sciences, which can also be found at the Japanese university. Dr. Tadashi Hisamitsu, President of Showa University talked about their institution, which celebrated its 90th anniversary last year. The university operates eight hospitals and a clinic within the Tokyo and Yokohama areas. Showa University has one of the best student-teacher ratios around the world and is ranked 6th in this category in the specialised ranking of Times Higher Education. The university has four sister institutions and has signed exchange agreements with 23 institutions. According to the president, internationalisation has become more and more important at Showa University and they consider it extremely important to establish new cooperative relations in as many countries as possible, including Hungary. 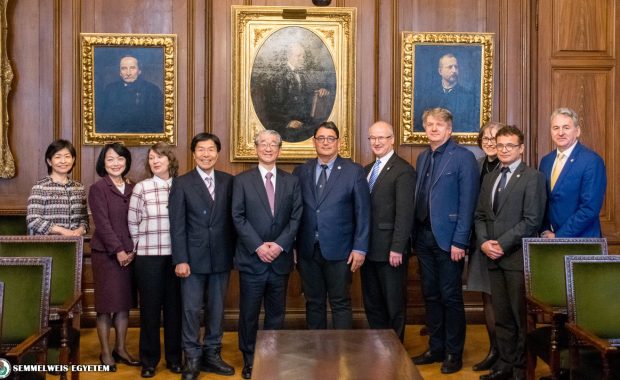 Following the presentations, the parties compared the study programmes in Japan and Hungary, including admission procedures, final examinations and the length of various courses. The meeting was concluded at the Basic Medical Science Centre, where Dr. Miklós Kellermayer, Dean of the Faculty of Medicine showed the visitors around and gave a brief overview of the courses at the centre.