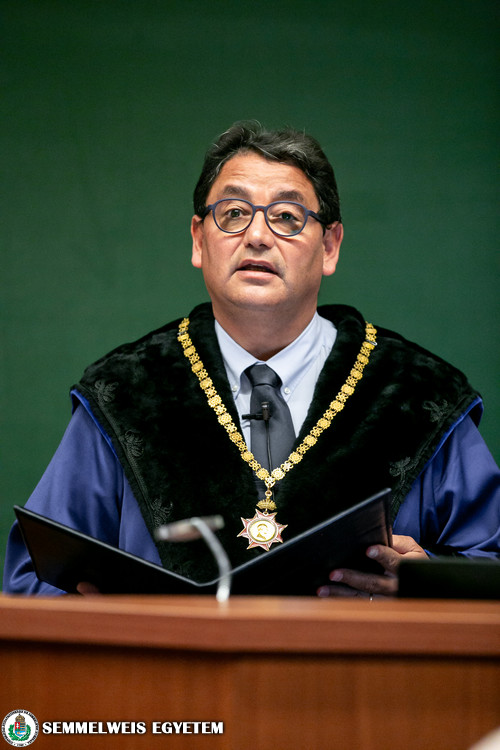 In his opening speech, rector Dr. Béla Merkely said that the university prepared a scientific program that is of higher quality than ever before for the symposium, as in two days, on November 7, it will celebrate its 250th anniversary. He noted that the main topic of the conference is translational medicine from single molecules to the cardiovascular system, as cardiovascular diseases are the leading causes of death both in Hungary and in Europe. In addition, innovations of cardiovascular diseases and their comorbidities are in the front line of the health industry, and the majority of the scientific output of Semmelweis University is also related to the cardiovascular field. The rector added that the symposium will cover a wide range of cardiovascular diseases, such as heart failure, atrial fibrillation, cardiac imaging, cardioprotection, regenerative medicine, stem cell therapy, and a very topical area that needs to be solved, cardiotoxicity. Dr. Béla Merkely also noted that besides the international speakers, the scientists of Semmelweis University and their collaborators will introduce their work in the poster sessions at the symposium.

“Declare the past, diagnose the present, foretell the future” – quoted the rector the words of Hippocrates, who thus foresaw the concept of innovation, which is key even for today. He added that the innovative thinking that characterizes Semmelweis University carries through this entire year of the special anniversary programs of the 250-year-old institution. He also mentioned the Ignác Semmelweis, after whom the university is named and whose innovative thinking and brave actions determine the road of Semmelweis University to the future. Semmelweis University plays a catalytic role in the region as the knowledge center of innovation in the health industry, especially in patient care, and the pharmaceutical, biotechnology and medical device fields, noted Dr. Béla Merkely. He thanked the professors present for their participation and for helping to further increase the reputation and prestige of the university. 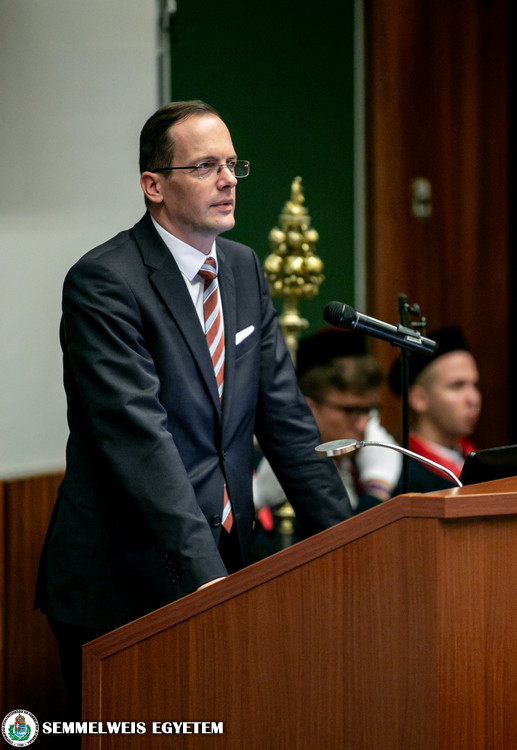 In his speech, Dr. István Szabó, vice-president for innovation and general affairs of the National Research, Development and Innovation Office (NKFI) pointed out that Hungary has a vivid and active innovation ecosystem, especially in the health industry. Regarding the government’s activities and developments in this area, he mentioned the Hungarian Center of Excellence for Molecular Medicine in Szeged, which started operations this year and where Semmelweis University is a partner institution, as well as the program to establish regional centers of cooperation between industry and institutions of higher education.

Dr. Péter Ferdinandy, vice-rector for science and innovation and the leader of the awards ceremony, announced that this year Semmelweis University is awarding the Doctor Honoris Causa title to 8 prominent professors, two of whom were conferred the title during the opening day program of the Semmelweis Symposium, while the remaining awardees will be conferred their titles on November 8, at the Doctor Honoris Causa and Dies Academicus ceremony of the university. The laudations for the two internationally renowned professors were read by rector Dr. Béla Merkely, who nominated them for the awards. 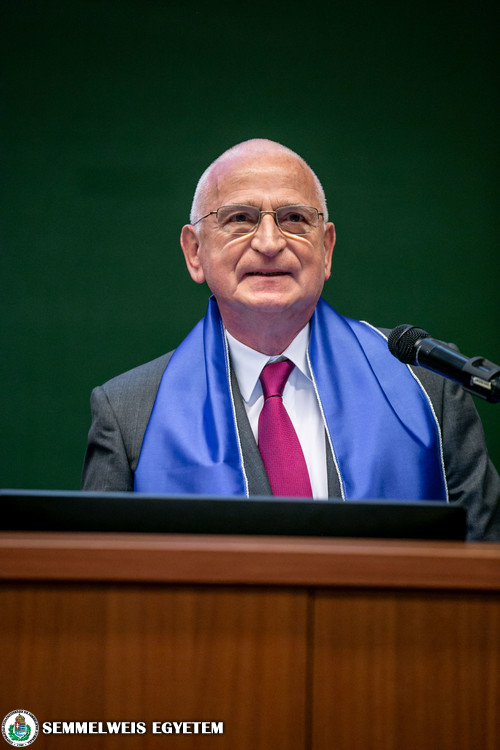 As described in the laudation, Dr. Michel Komajda is the former President of the European Society of Cardiology (ESC) who as made significant contribution to close the gap between Western and Eastern Europe, to get Central-Eastern European countries and institutions involved in milestone clinical trials and researches. He was president of the ESC in 2010-2012 and occupied several key positions in the organization before that. In 2011 the Hungarian Society of Cardiology inaugurated him as its honorary member, and he participated in and held lectures at the society’s scientific conferences several times. He has also had joint scientific research projects on heart failure with the physicians and researchers of the Heart and Vascular Center of Semmelweis University, which led to two international publications. Based on the Parisian experience and with the help of Professor Komajda the heart center could introduce the so-called ECMO program in Hungary, which fundamentally assisted the success of the national heart transplantation. He organized about ten symposia on heart failure with the involvement of the Hungarian profession.

Following his acceptance of the Doctor Honoris Causa title, Dr. Michel Komajda briefly expressed his gratitude in Hungarian, then went on to hold the symposium’s first keynote address on the connection between diabetes and heart failure. 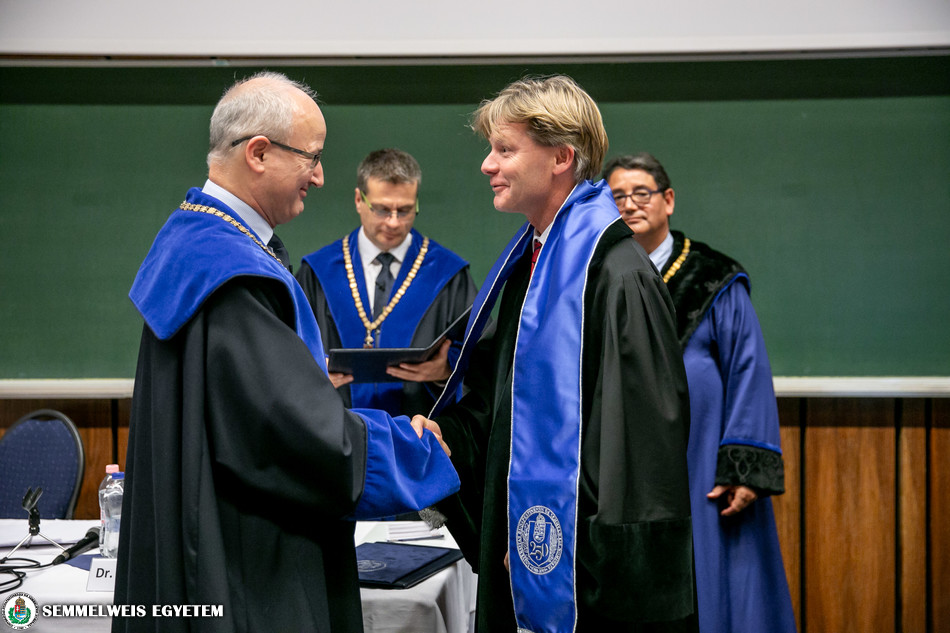 In his laudation of Dr. Jeroen Bax, Dr. Béla Merkely highlighted that they have been working together both under the umbrella of the ESC and on research projects on cardiovascular imaging for about a decade. Prof. Bax is currently Professor of Cardiology and Director of Non-Invasive Imaging at Leiden University Medical Center, the Netherlands. In 2014 he received the Honorary Member title of the Hungarian Society of Cardiology and has attended and held lectures at the scientific meetings and conferences of the society several times. He has been collaborating with the Hungarian colleagues and the researchers of the Heart and Vascular Center on cardiovascular imaging projects for several years. He has been involved in the work of the ESC since 2004, in increasingly significant roles, which culminated in him being president of the society between 2016 and 2018.

After accepting the title of Honorary Doctor, Dr. Jeroen Bax said it is a great honor to receive this distinction, as Semmelweis University has always been one of the top health care universities in Europe. The Dutch professor held his keynote address in the afternoon of the symposium’s first day, on the topic of vulnerable plaques. 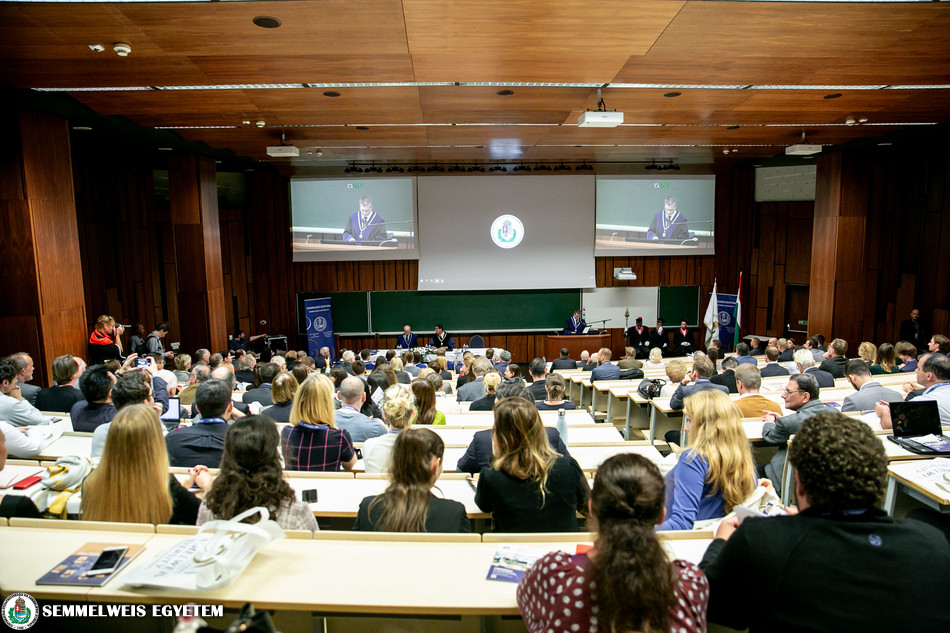 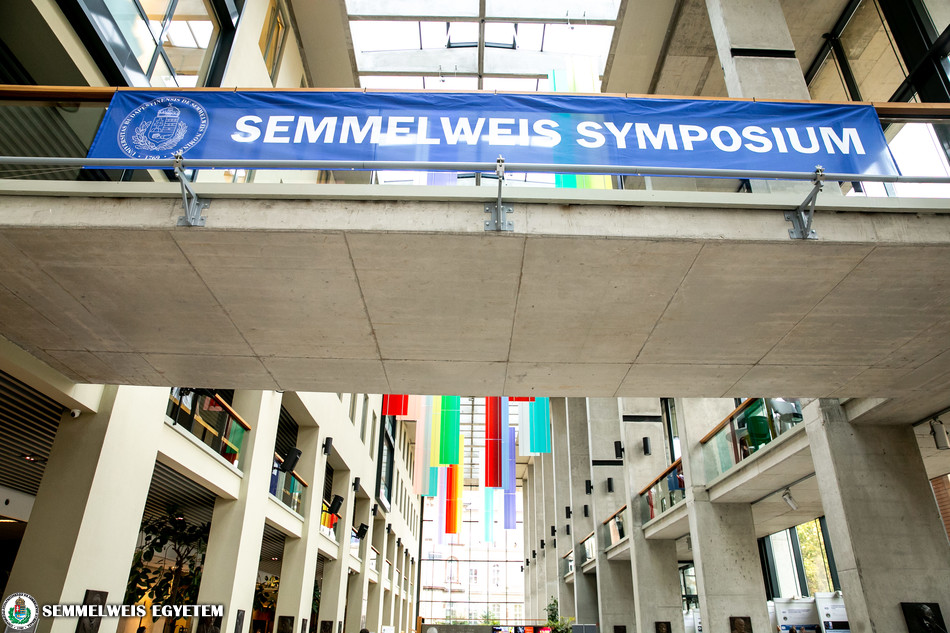 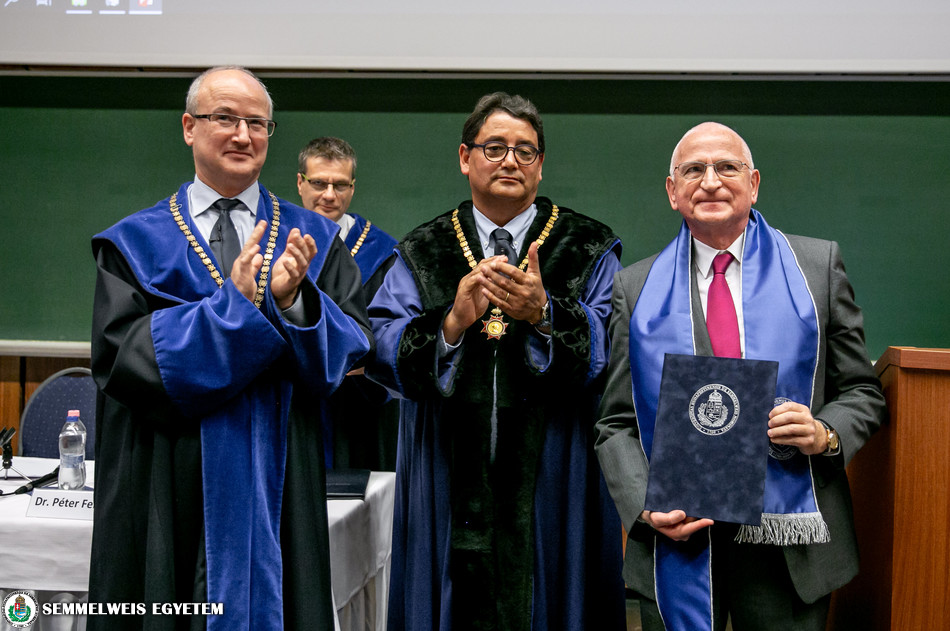 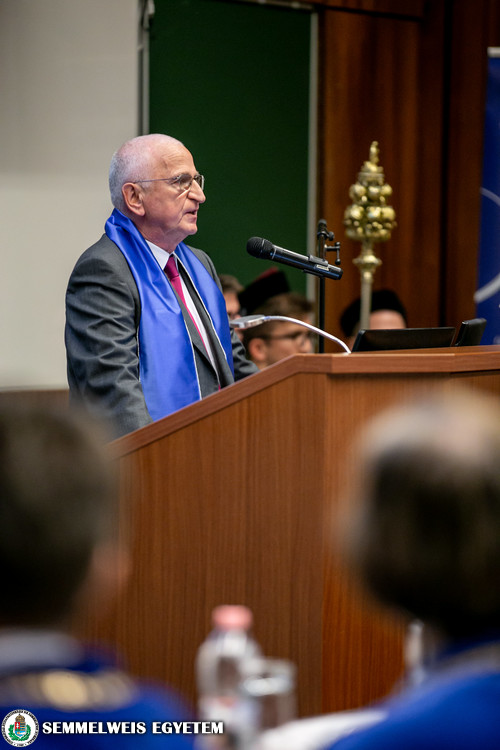 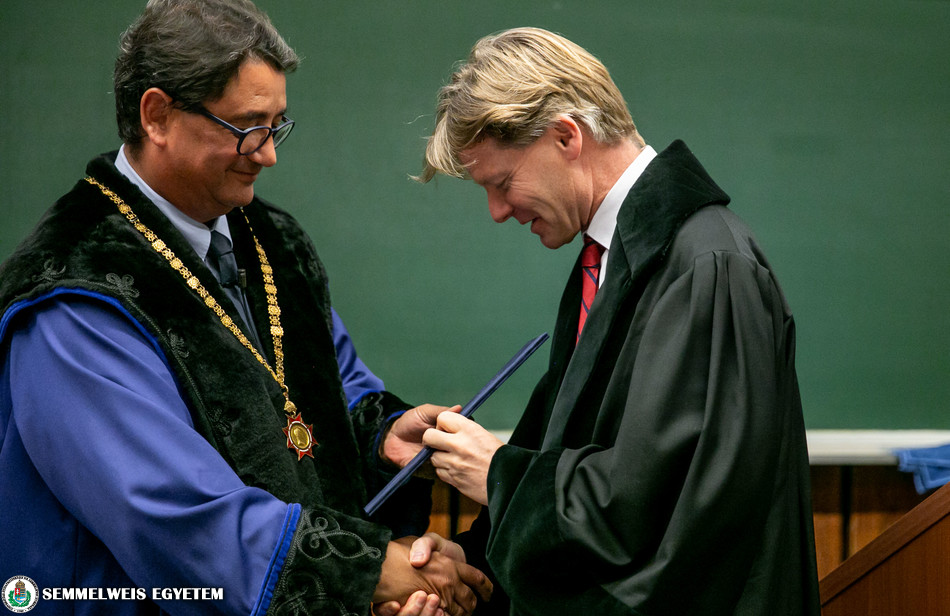 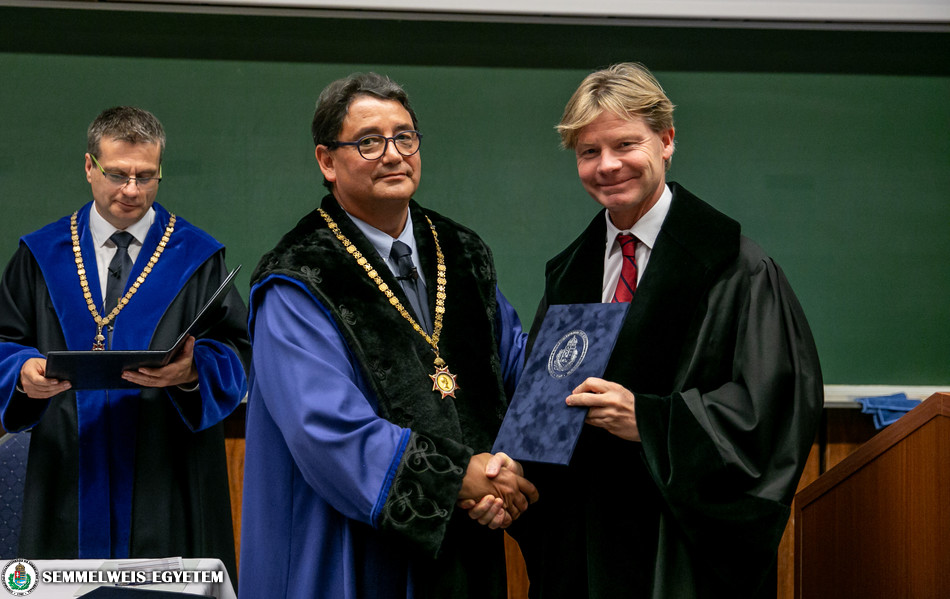 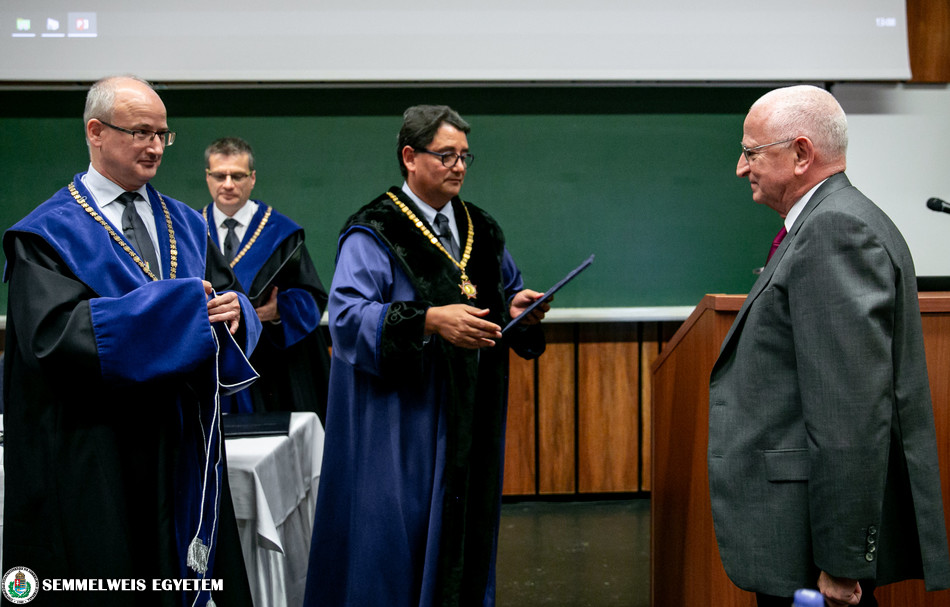 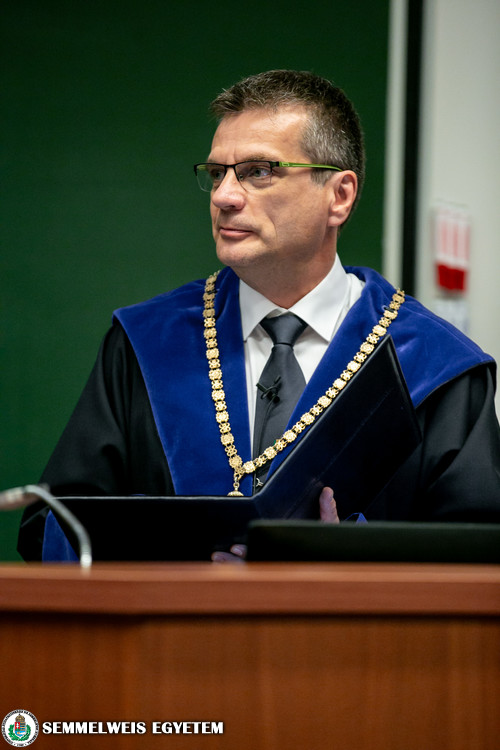 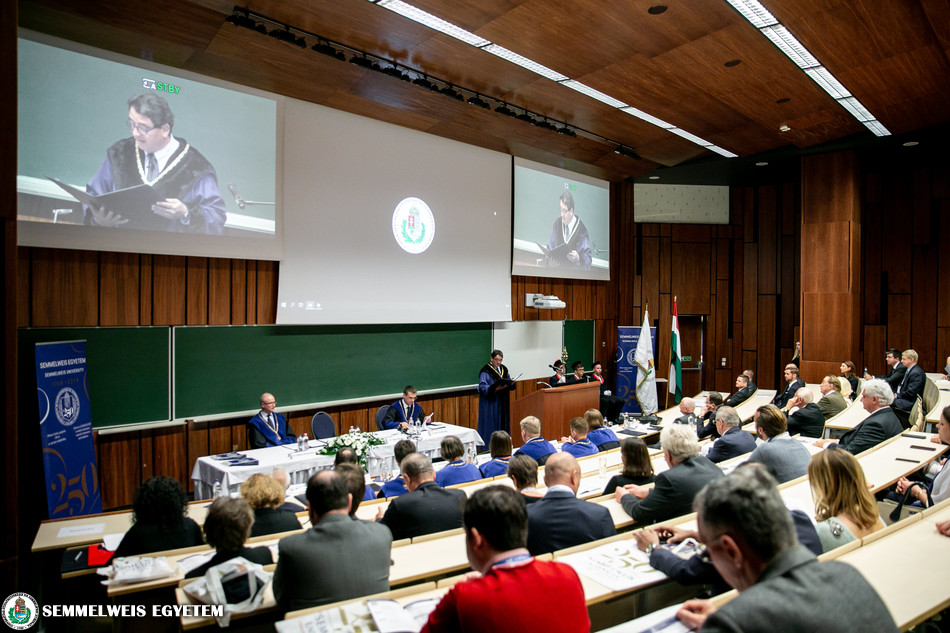 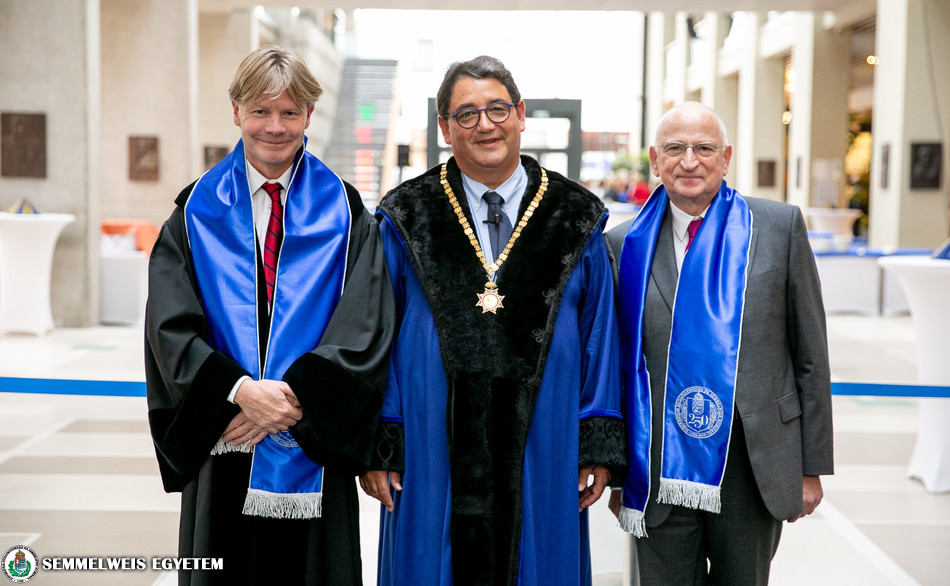 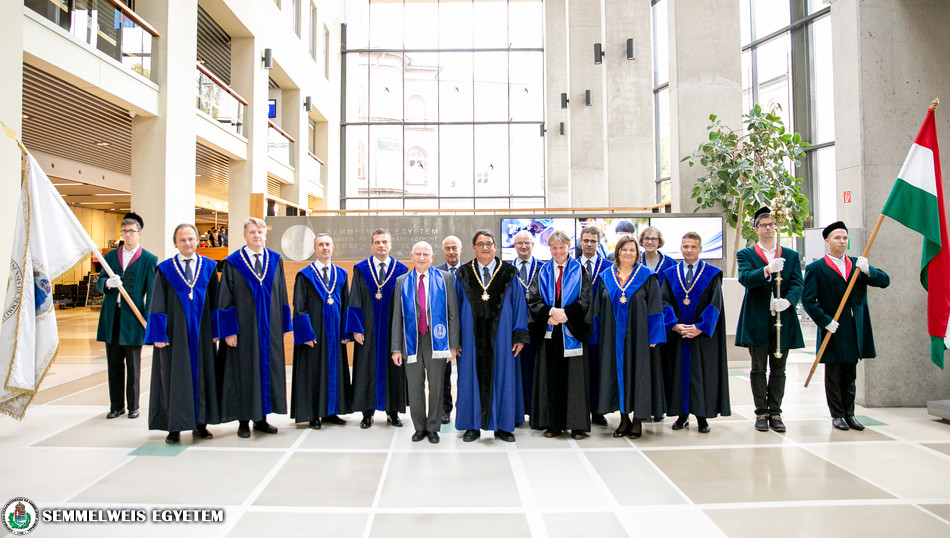 Following the Doctor Honoris Causa ceremony, the academic program of the Semmelweis Symposium resumed with the presentation of Dr. Stephan Achenbach, the president-elect of the ESC, who talked about CT imaging and interventional cardiology.

The annual Semmelweis Symposium, organized around a different topic each year, is one of the most prestigious international scientific events of the university. This year, it is integral part of the comprehensive series of events held to celebrate the 250th anniversary of Semmelweis University. 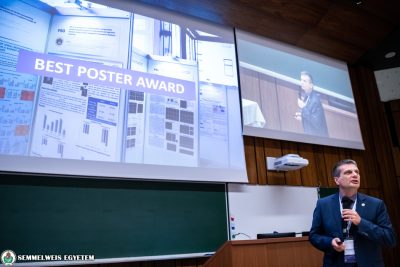 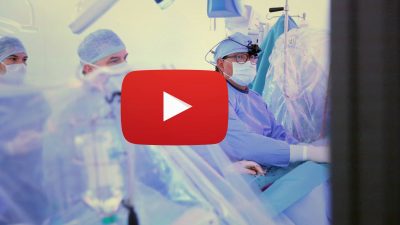 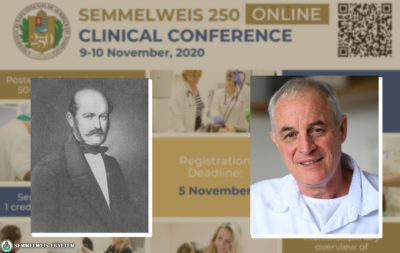