The open ceremonial session of the Senate was opened by Dr. Balázs Hankó, vice-rector for strategy and development, which was followed by the presentation of awards. Certificates on awarding the title of “Lecturer Pharmacist of Semmelweis University’s Faculty of Pharmaceutical Sciences” were handed over to Dr. Lívia Gál, Dr. Rita Kelemen and Dr. Edit Zajácz Szaniszlóné. The recognition can be awarded to lecturer pharmacists who have taken part for a longer time in the summer and final-exam practical training of pharmacy students, and their preparation for final exams, and who are high-quality educators. “Associate lecturer of the Faculty of Pharmaceutical Sciences” awards were presented at the ceremony to Dr. Attila Oláh and Dr. András Telekes. The title recognizes the work of non-pharmacist professionals who have taken part in the education of pharmacy students for at least 5 years, and who conduct outstanding professional activities supported by publications or scientific degrees. 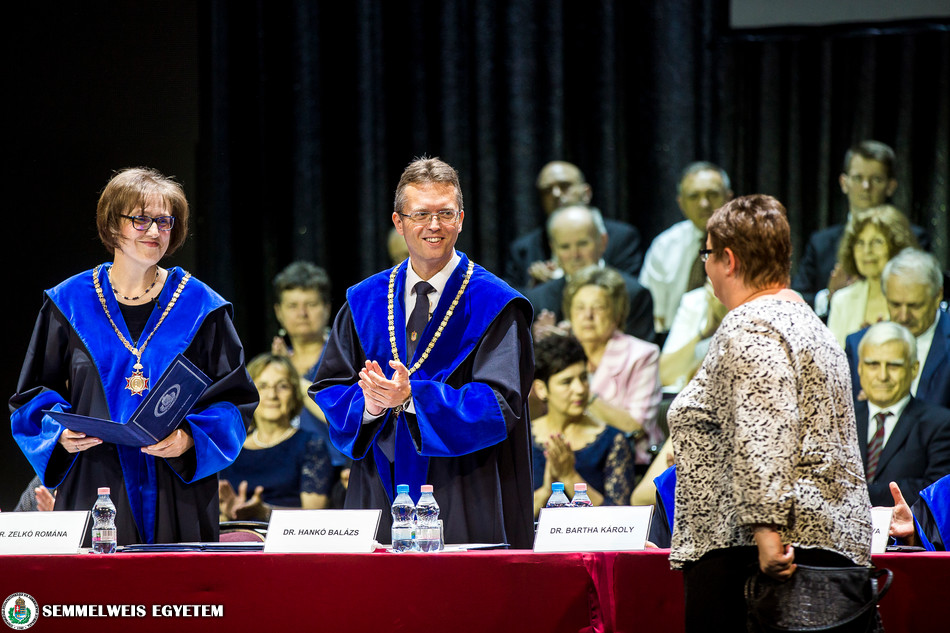 This year, the jury awarded the Károly Zalai Memorial Medal, which is for final-year pharmacy students with exemplary, outstanding grades who conduct independent research activity in pharmacy or medicine and whose results were published in a scientific journal, to Márk Fábián. 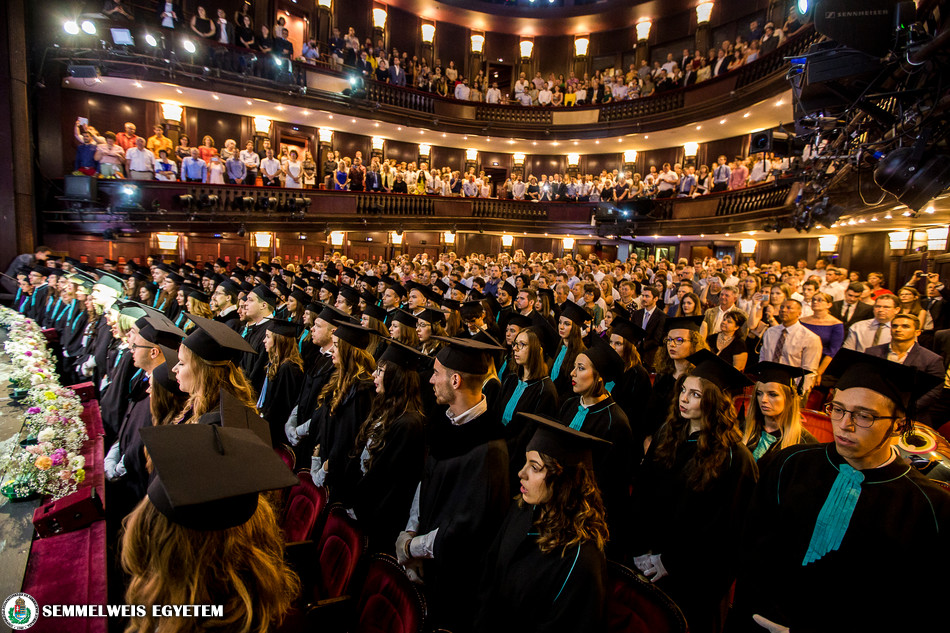 Representing the newly conferred pharmacists, Dr. Márk Fábián said that true to their oath, they will strive to serve health care and the nation for the honor of Semmelweis University and their own integrity. In the name of the graduating class, a speech was held by Dr. Dóra Végi, freshly graduated pharmacist. “The biggest success, as well as one of the biggest difficulties of our university years was that they changed our way of thinking: we learned to organize information and see the world in its broader context,” she said. Representing international students who received their pharmacist diplomas in the German-language program, Dr. Theresa Wieltschnig thanked the support of the families, the university and the lecturers, who all helped them get to this day. In the name of international students who received their pharmacist diplomas in the English-language program, Dr. Sara Nazarian spoke, highlighting that with the diplomas they received today, their dreams have come true. 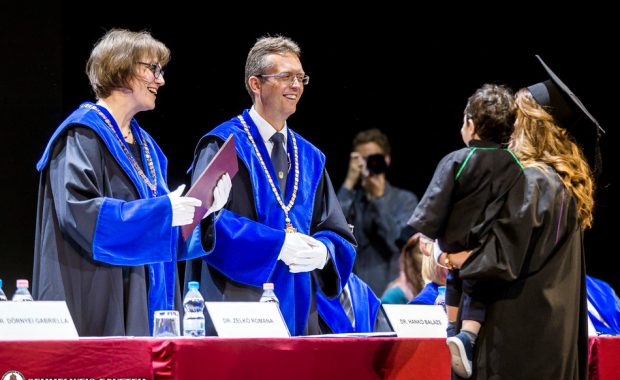 In her ceremonial speech, dean Dr. Romána Zelkó pointed out that the Semmelweis XXI Development Project has made possible the establishment of the Hőgyes-Schöpf-Merei Pharmaceutical Research Center, which will establish the educational and geographical integrity of the Faculty of Pharmaceutical Sciences, and the country’s sole university-state education unit that focuses on pharmaceutical research and considers pharmaceutical policy objectives will be created, based upon the foundation of the faculty. 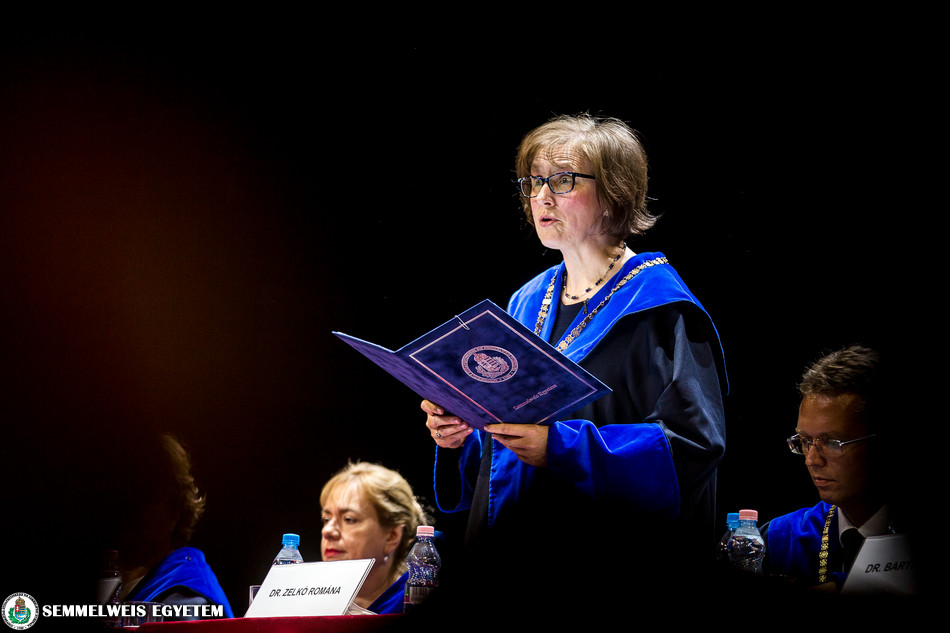 “You did not choose a profession, but a vocation, which is directed at serving others,” the dean told the fresh graduates. She added that the pharmacist vocation is an autonomous, open activity whose framework is determined by the patient’s often indefinable and changing needs. The pharmacist diploma is very prestigious, said Dr. Romána Zelkó, emphasizing that today, in addition to their traditional roles, pharmacists also play a role in following a healthy lifestyle, and in the case of self-medication, they have to assist in the selection of the right pharmaceutical or other kind of therapy as well. It is also their responsibility to help the correct and safe use of drugs with their advice, or to recommend drug substitution, thus saving cost both for the state and the patient, Dr. Zelkó noted. She added that with their fresh diplomas, graduates can find jobs in hospitals or clinics, but pharmaceutical firms or state authorities are also an option. Finally, the dean called attention to the importance of continuous self-learning.

For the complete photo gallery, please visit our Hungarian site for the report on the event. 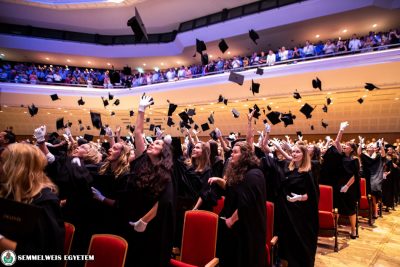 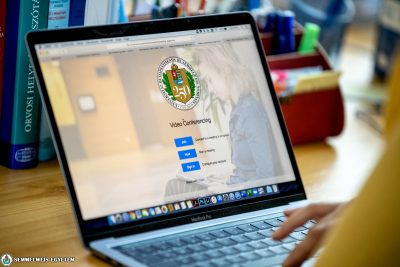 Zoom up and running: the system can be used for remote instruction as well as online conferencing