A delegation from Shanghai Hospital Development Center visited Semmelweis University’s Department of Obstetrics and Gynaecology and had a meeting with Dr. Attila Szabó, Vice-Rector for Clinical Affairs and Dr. Marcel Pop, Director of International Relations. The visit was organised by Gedeon Richter China.

Dr. Guo Yongjin, Deputy Director of the Center and head of the delegation was accompanied by Dr. Gao Wen, President of Huadong Hospital, Dr. Zheng Peiyong, Vice-President of Longhua Hospital belonging to Shanghai University of Traditional Chinese Medicine, Dr. Zhou Xiao and Dr. Yu Yongchun, Vice-Presidents of the Shanghai Pulmonary Hospital, Dr. Lu Bing, Deputy Director of Strategic Planning and Evaluation of Shanghai Hospital Development Center, András Gizur, President of Gedeon Richter China, Stephen Liang, CEO of Gedeon Richter China and Michael Sun, Deputy-Director of Gedeon Richter China. The delegation was received by Dr. Sándor Valent, associate professor of the Department of Obstetrics and Gynaecology and shown around in the unit in Baross street. The visitors were introduced to the operation of the NICU and had the opportunity to follow some surgeries in progress. After the tour at the department, the delegation was met by Dr. Attila Szabó, Vice-Rector for Clinical Affairs, Dr. Marcel Pop, Director of International Relations, Diána Módos and Marianna Kovács, Project Coordinators. 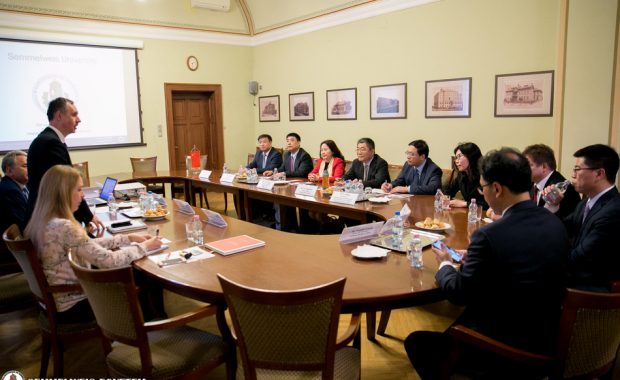 The presentation was followed by a Q&A session. Dr. Guo Yongjin, representing Shanghai Hospital Development Center asked about the homogeneity of the European educational system and the directive of the EU regarding the recognition of biomedical degrees obtained Hungary. Dr. Attila Szabó gave a detailed account of the number of patient care units and beds, inpatient care, financing and the work of the departments’ directors.

In response to the question of Dr. Yu Yongchun, Vice-President of the Shanghai Pulmonary Hospital, Dr. Attila Szabó and Dr. Marcel Pop briefly introduced the single-cycle programmes at the Faculties of Medicine, Dentistry and Pharmacy, as well as the Bachelor’s and Master’s programmes at the Faculty of Health Sciences. They also spoke about the application procedure of the Ph.D. School, its 4-year-long programme and other ways of obtaining the Ph.D. degree. Dr. Lu Bing’s question was answered by a short summary of the University’s specialist training.

Following the questions, the head of the delegation introduced the activities of Shanghai Hospital Development Center. The Center, founded in 2005, manages the operation of 38 hospitals in Shanghai, including 17 general, 17 specialised and 4 TCM hospitals. These hospitals have 70,000 employees and 40,000 patient beds. They cater to the needs of 80 million outpatients and 2 million inpatients and perform 1.5 million surgeries annually. The Center is also responsible for international relations and has partnerships with several countries and universities (eg. Harvard, Paris).

At the end of the meeting Dr. Guo Yongjin mentioned the possibility of a cooperation with Semmelweis University and a partnership with the University’s clinical departments.