Dr. Károly Szász informed the delegation about the Hungarian government’s intentions of promoting its Eastern Opening strategy and the good and long-standing Chinese-Hungarian economic relations.

“In the past few years there have been several events, meetings and conferences between China and Hungary, which have given rise to further opportunities for cooperation. The latest of such events was the meeting of the health ministers of China and Central-Eastern Europe in Budapest.”, Dr. Károly Szász said. 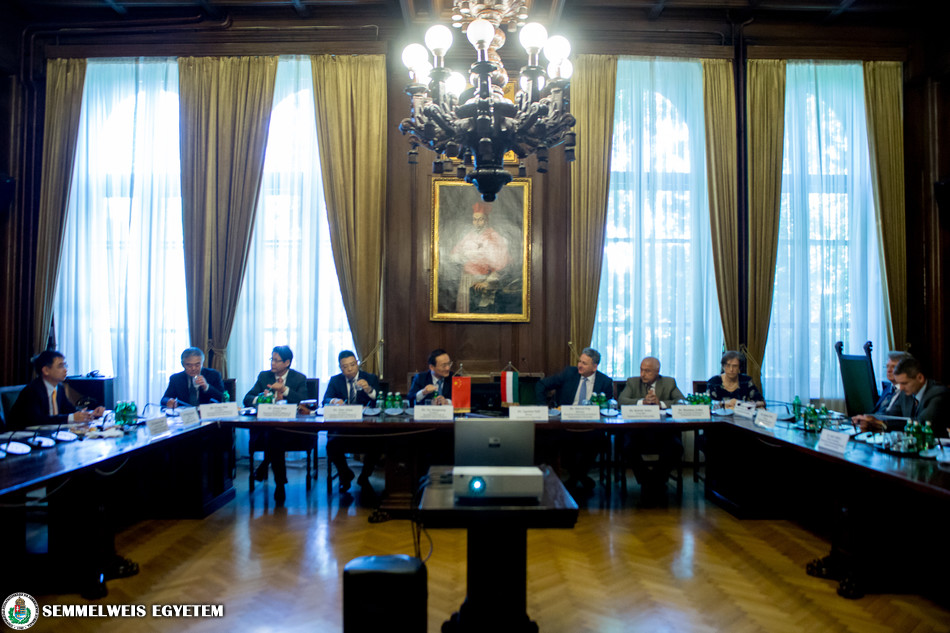 Based on the suggestion of the head of the Chinese delegation, Dr. Xu Jianguang, President of Shanghai TCM, the bilateral agreement signed in 2016 gives an excellent foundation for the realisation of the actual cooperation between the two universities, which could start with the launch of staff and student exchange programmes.

“Shanghai TCM has founded Centres for Traditional Chinese Medicine in several countries, for example in Malta and now we are planning to establish one in the United States and in Hungary.”, Dr. Xu Jianguang said.

“The foundation stone of the new wing of the Faculty of Health Sciences has also been laid. The building of the new branch of the Faculty is going to be realised by governmental financing and the university’s savings. We are open and pleased to receive professional and/or financial support from all Chinese partners who are interested in the realisation of the project.”, Dr. Zoltán Zsolt Nagy said.

Both parties agreed on the importance of cooperation in the field of phytotherapy. Dr. Szabolcs Béni spoke about the appearance of more and more Chinese herbs in the European markets (mainly in food supplements), which require stricter market surveillance.

“I hope that herbal medicine research will be one of the priority areas of the new Centre. It would also be a beneficial for Pharmacy students to have Traditional Chinese Medicine among the elective courses and to have the opportunity to do their summer practice in Chinese research institutions.”, Dr. Szabolcs Béni said.