The delegation of Tokyo Medical University visited Semmelweis University on February 24-25, 2017, in the framework of which the collaboration has been reinforced on three different levels between the two institutions. Besides the Memorandum of Understanding a Sister Agreement as well as a Student Exchange Agreement were also signed by the representatives of both universities.

The members of the Japanese delegation, led by Dr. Mamoru Suzuki, President of Tokyo Medical University, were Dr. Miki Izumi, Professor of Medical Education, Ms. Aya Nagata, Coordinator of the Student Exchange Program and Dr. Mária Mernyei, Professor, who provided a lot of support in the organization of the delegation’s visit. The representatives of Tokyo Medical University were welcomed at Semmelweis University by Dr. Ágoston Szél, Rector, Dr. Miklós Molnár, Vice-Dean of the Faculty of Medicine, Dr. József Sándor, Scientific Advisor of the Department of Surgical Research and Techniques, Dr. Marcel Pop, Director of International Relations and Dr. Judit Vadlövő, Project Coordinator of the Directorate of International Relations. 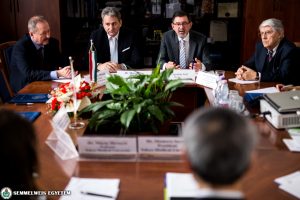 After a warm welcome Rector Szél said that he considers this visit very important, since the agreements signed during the discussion provide an opportunity for both Japanese and Hungarian students to study abroad in the framework of a training programme. Rector Szél expressed his gratitude to H.E. Dr. Kosuge Junichi, Ambassador of Japan in Hungary, who participated in the official discussion and the signing process together with Ms. Yoshiko Okamoto, Second Secretary of Cultural Affairs at the Embassy of Japan in Hungary. As Rector Szél pointed out, the presence of His Excellency at the discussion unquestionably proved the high level of Japanese-Hungarian relations.

Dr. Kosuge Junichi talked about the undergoing process of the reinforcement of Japanese-Hungarian political and economic relations, and he expressed his appreciation that this is also manifested in the academic relations. 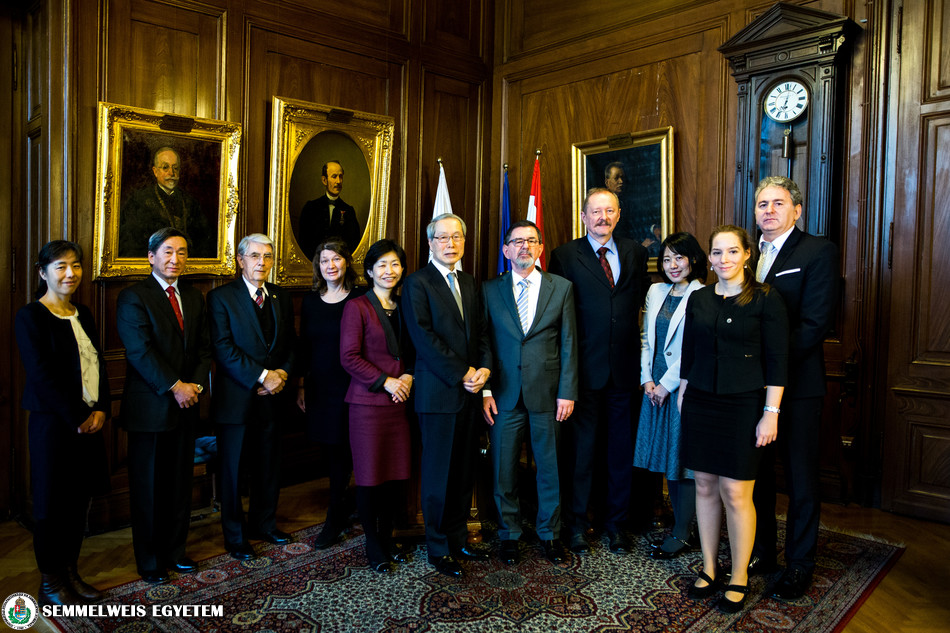 Dr. Mamoru Suzuki, President of Tokyo Medical University, also highlighted the significance of the signing of these agreements: according to him the collaboration now has become official between the two institutions.

Dr. József Sándor emphasized among other things that both institutions have the same principles and purposes: a well-operating patient care system. 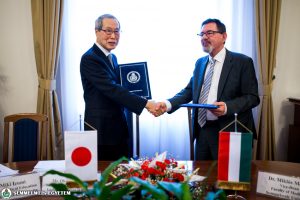 At the end of the discussion the leaders of both universities officially signed the Memorandum of Understanding, a Sister Agreement as well as a Student Exchange Agreement. These agreements contain regulations regarding the mutual student-, researcher- and staff exchange programme, the exchange of information between the two institutions as well as the organization of common lectures and seminars. The agreement related to the exchange of medical students provides the opportunity for the following: both universities to send and receive 2-2 graduating students for clinical training during one academic year, for maximum 8 weeks per student.

After the discussion and the official signing of the agreements the Japanese delegation visited the 1st Department of Pathology and Experimental Cancer Research, where Dr. András Matolcsy, Director, welcomed the representatives of Tokyo Medical University. The delegation also visited the Heart and Vascular Centre, where they were welcomed by Dr. György Bárczi, Senior Lecturer. Dr. Bárczi introduced the facilities and the daily work of the Centre to our Japanese guests in details.