Number of vaccines administered at Semmelweis University - 27. June 2022
More information
Seven people were presented with commemorative medals at the Heart for Heart Foundation’s ceremony at Semmelweis University, to mark the 30th anniversary of the first heart transplant in Hungary. The medal pays tribute to the memory of professor Zoltán Szabó as well, who performed the first heart transplant in Hungary. The plans are to award the medal every year to those who have contributed to the world-leading Hungarian heart transplant programme through their outstanding professional and managerial achievements. The event, held in the Semmelweis Salon, was attended by representatives of the patient organisation, new heart patients and leading figures in the field of heart transplantation. 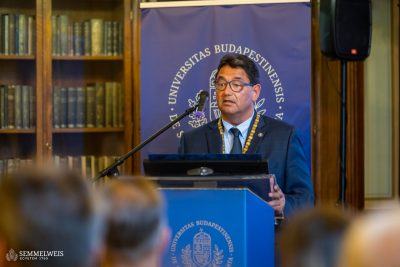 – the rector said, noting that the pandemic had prevented the commemorative event from taking place at the beginning of January.

The historic date was January 3, 1992, when his master and mentor, Dr. Zoltán Szabó, performed the first heart transplant in Hungary at the Városmajor Clinic, he recalled. “His pioneering work is of decisive importance to this day, and has laid the foundations for the development of Hungarian heart transplantation into a programme and a success story in Hungarian medicine,” said the rector, who was also present in the operating theatre to witness the important event as a junior doctor. He added that the experience had a lasting impact on his career at Városmajor, including the goals he and his colleagues set and achieved.

He also stressed that the first operation was absolutely successful, as Sándor Schwartz lived with his new heart for 28 years. The second heart transplant patient, who had already been transplanted by Professor Dr. Elek Bodor, also lived for the same amount of time, and later received a second new organ. These two positive examples gave us a lot of strength to make these first 30 years so successful,” the rector pointed out.

Dr. Béla Merkely considered it an important step for the development of the heart transplantation programme that from 2012, the operation is carried out in a single clinic, the united Városmajor Heart and Vascular Centre, which enables the multidisciplinary approach essential in the field. The clinic now has a dedicated Transplant and Cardiac Intensive Care Unit, and is in the process of further development to create a separate unit for patient selection and immediate post-operative care. 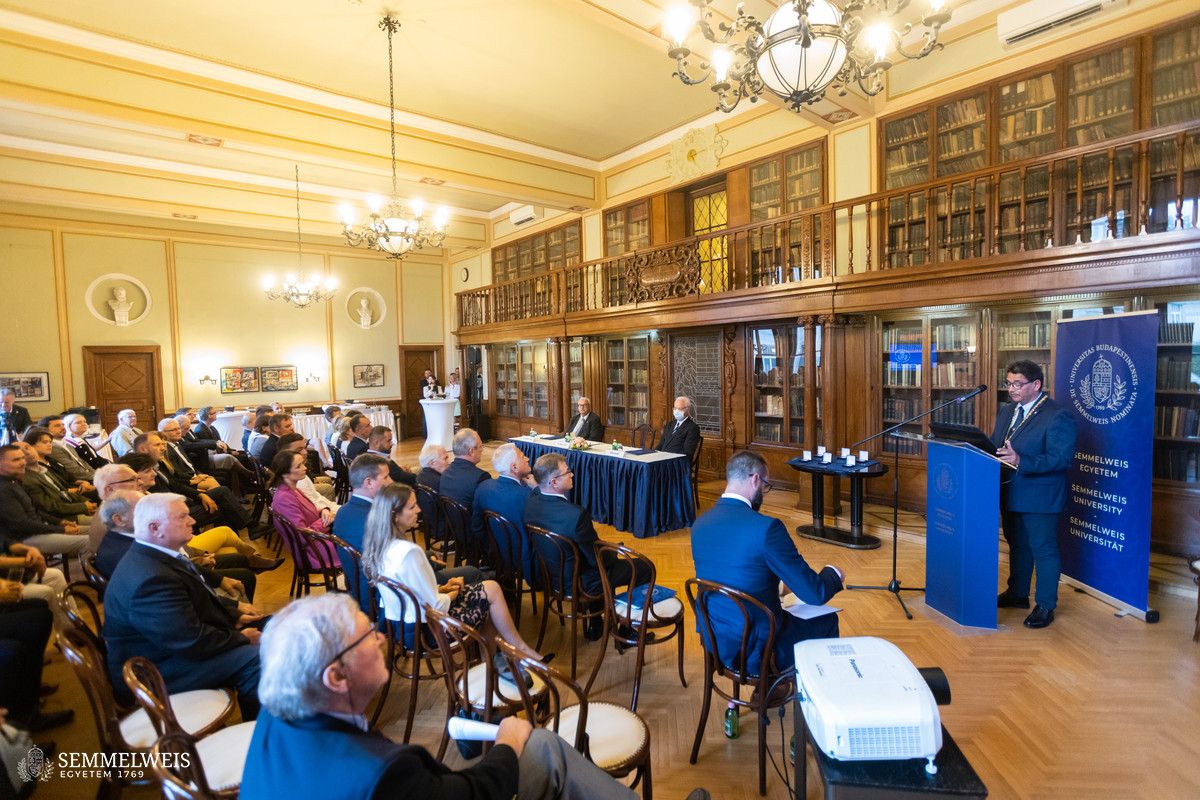 “Joining Eurotransplant in 2013 was an important step in increasing surgical activity, as was the change in approach to donor management. In addition, the development of human resources and establishing a dedicated cardiac transplant team was essential. The creation of biobanks is an important milestone in heart failure research. All of this was necessary to become the second largest transplant centre in Europe by 2019,” he concluded.

“The COVID-19 epidemic had a major impact on organ transplants around the world. As rector of the university and director of the clinic, I consider it a priority to regain and further strengthen our previous positions in this field as the pandemic subsides,” the rector added. 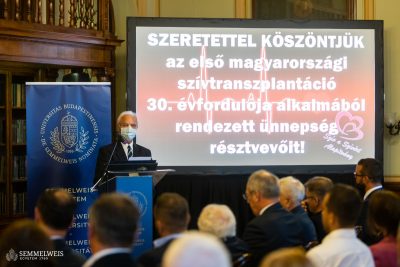 László Erdős, secretary of the Board of Trustees at the Heart for Heart Foundation, who himself is a heart transplant recipient since 11 years, took the initiative to hold a minute of silence in memory of those who are no longer with us. László Erdős recalled that their organization was founded 29 years ago, to provide financial and moral support to those who are about to undergo the surgery. The foundation was set up by wo individuals. One of whom, László Dolgos, was present at the ceremony and said that since one of his colleagues received a new heart, this area became close to his heart, and inspired the creation of the foundation eventually.

László Erdős said that in the beginning they were like a small family, celebrating birthdays together, attending each other’s weddings, going to examinations together, encouraging each other. Today they have become a big family, with more than 400 heart transplant patients in Hungary, but they keep in touch with most of them, and organise doctor-patient meetings every year. “With a new organ, heart transplant recipients get a chance for a new life, so the day of the transplant is kind of a second birthday. We are grateful to all who helped us to this new life. Besides many others, thanks are due to our families, donors, doctors, nurses, coordinators, and health workers,” he said. 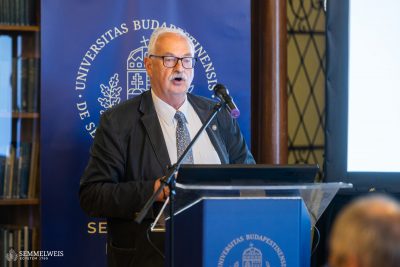 Dr. Zoltán Szabolcs, professor of cardiac surgery at the Heart and Vascular Centre in Városmajor, President of the Heart for Heart Foundation, recalled in his presentation the events that took place in Hungary on the historic date of 3 January 1992, when the first Hungarian heart transplantation was executed. He presented the surgical team that performed the first operation under the leadership of professor Zoltán Szabó, namely Dr. Elek Bodor, Dr. Endre Moravcsik, Dr. Tibor Gyöngy, Dr. Ferenc Horkay, Dr. Zoltán Szabolcs, Dr. Imre Kalmár, Judit Horváth, Márta Fazekas, and Borbála Forrai. 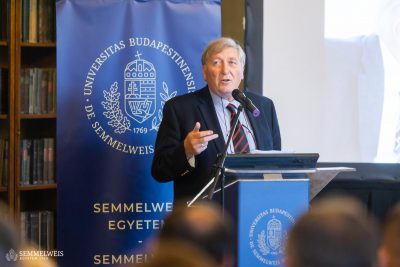 He reminded that Dr. Zoltán Szabó ordered a news blackout after the successful surgery, but the operation was made public on 8 January by an unknown caller. Dr. László Enzt, professor of vascular surgery at the clinic, described the controversial way the press presented the news, recalling both negative and positive examples – he even presented articles of the time read by famous actors such as Juli Básti, István Hirtling, Károly Eperjes, and Tamás Puskás. 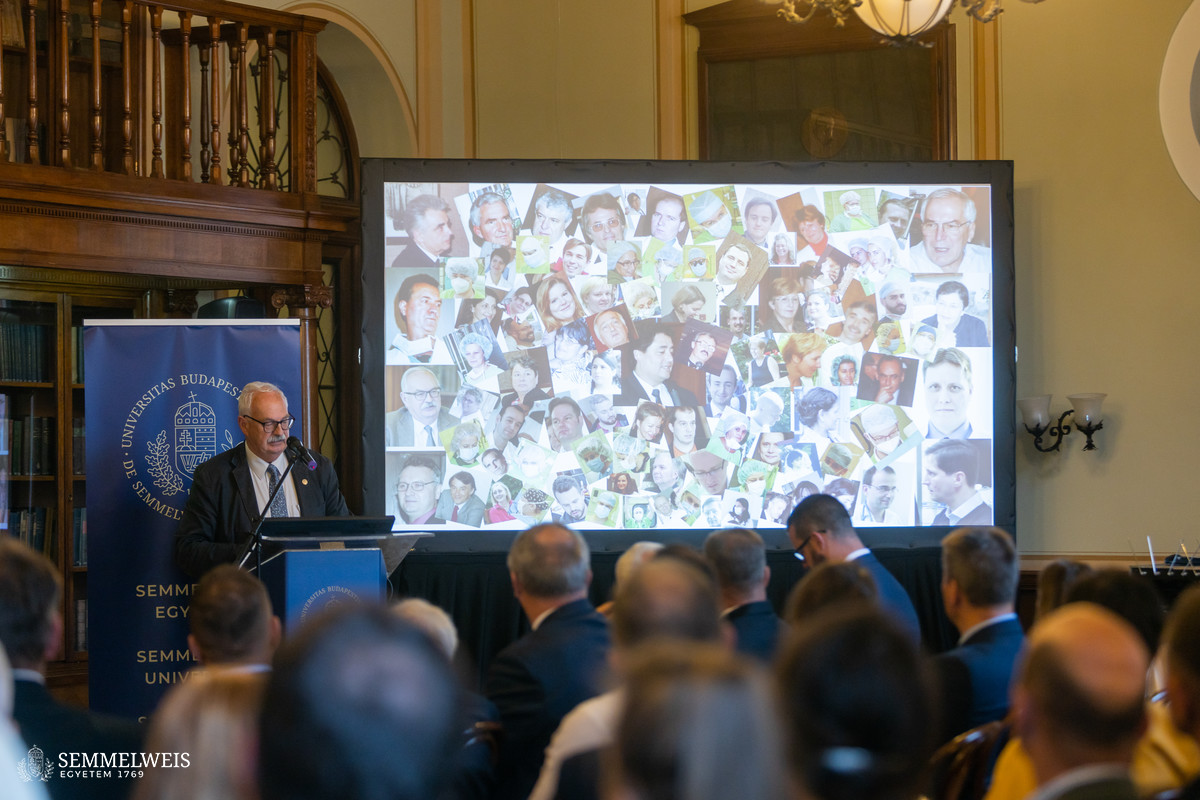 After a slow but persistent evolution, the Hungarian heart transplant programme took off in 2012-13 upon joining Eurotransplant, tripling the transplant activity of previous years.

It reached its peak in 2019, when 64 adult heart transplants were performed at Városmajor along with 8 children and GUCH patients at GOKVI. By 7 June 2022, a total of 726 transplants had been performed in Hungary, 656 of which at the Városmajor clinic.

The event was briefly addressed by Dr. Péter Sótonyi, rector emeritus, who was involved in the field as a professor and then director of the university’s Institute of Justice and Forensics, practicing on cadavers. “The team’s belief that they could implant the organ as quickly as possible through practice and the respect with which they approached the subject was unforgettable,” he said.

The attending physician of the first heart transplant patient, Dr. Károly Zámolyi, cardiologist of the former Medical Training Institute at Szabolcs Street, made a short speech as well. He recalled that Sándor Schwartz lived a hospital-bound life, and it was on 4 October 1991 when the team informed him that a heart transplant was the only solution, to which he was very much looking forward to.

László Szakács, the doyen of the Hungarian new heart community was also present at the event, who was the eighth Hungarian to receive a new heart 28 year ago. As a piece of advice, he said that after a heart transplant, it is essential to have family support, a meaningful occupation and a healthy lifestyle – he himself was a member of the transplant team for 13 years. 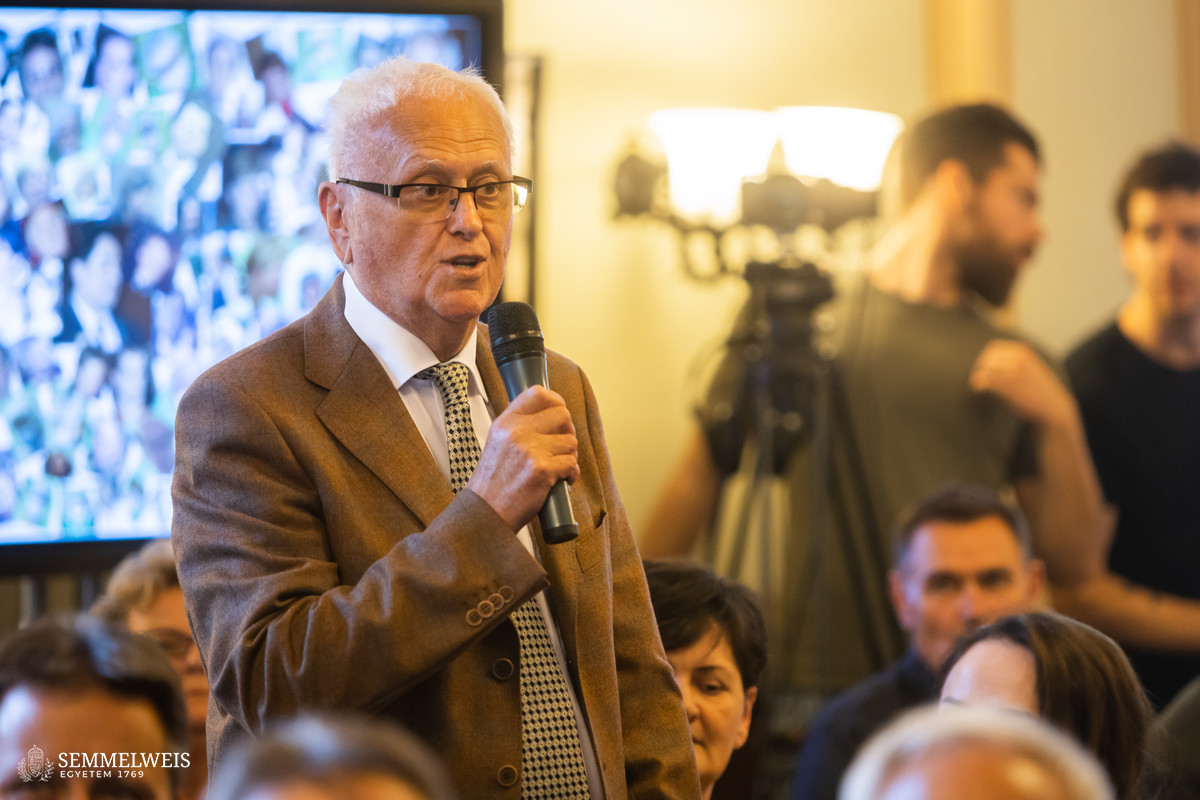 The ceremony continued with the presentation of awards. To mark the 30th anniversary of the first heart transplant in Hungary, the Heart for Heart Foundation presented a Heart for Heart commemorative medal to the following: 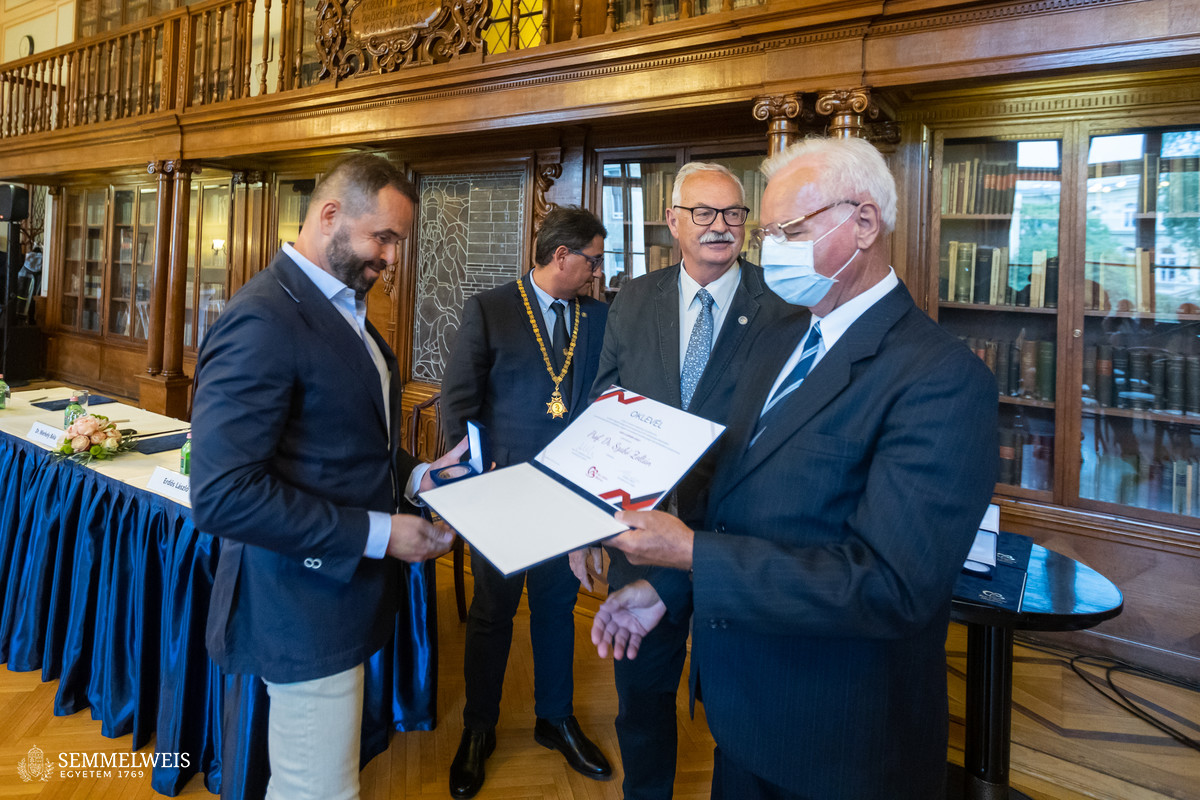 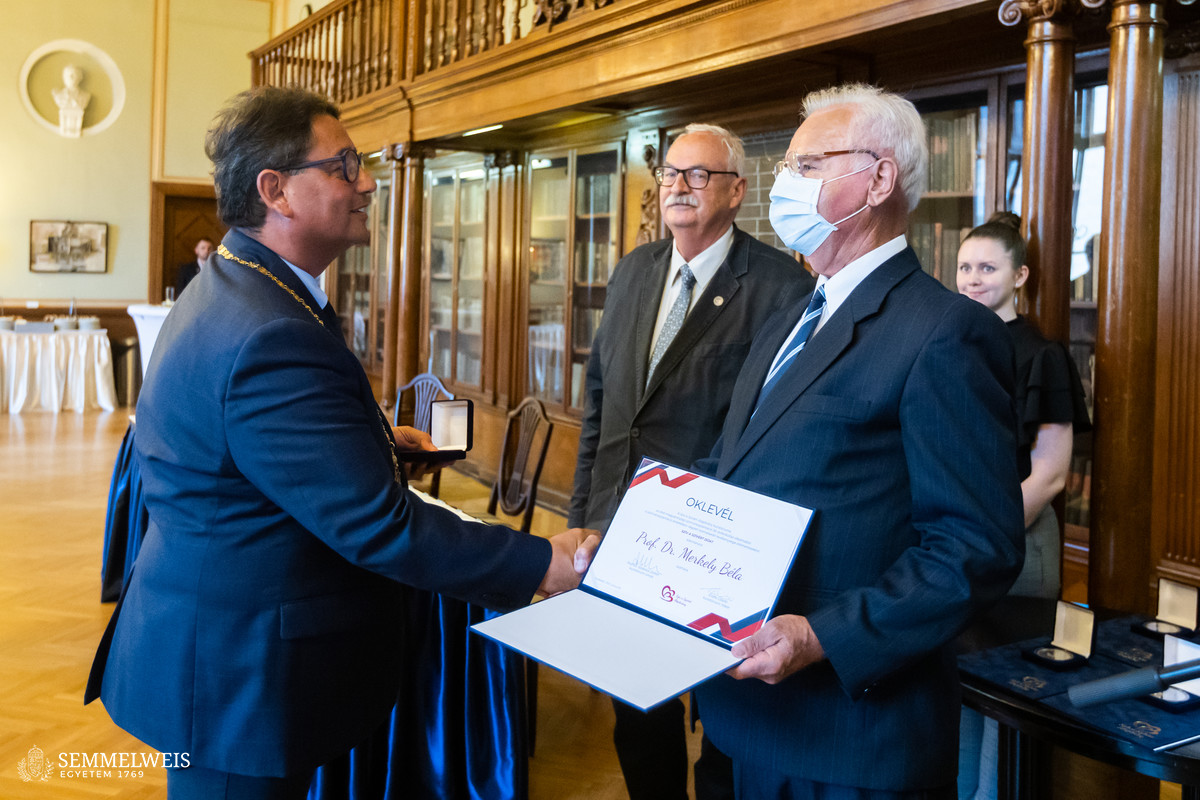 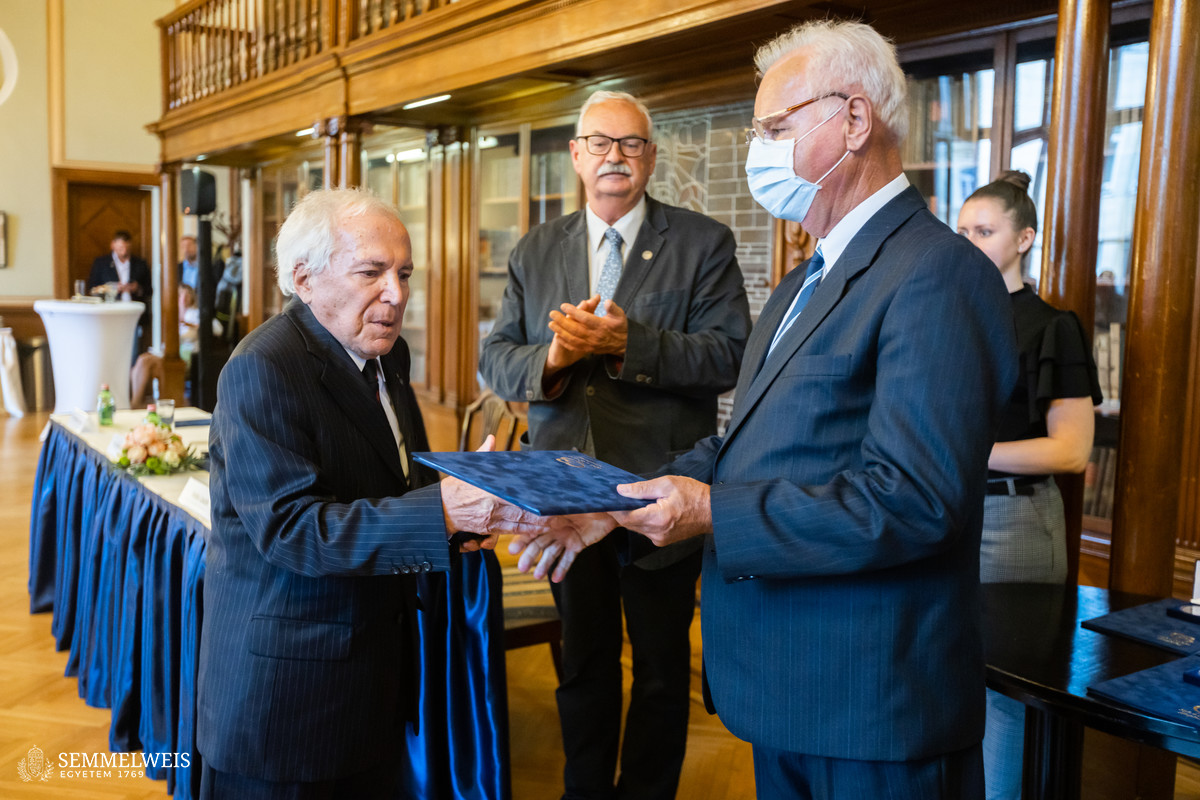 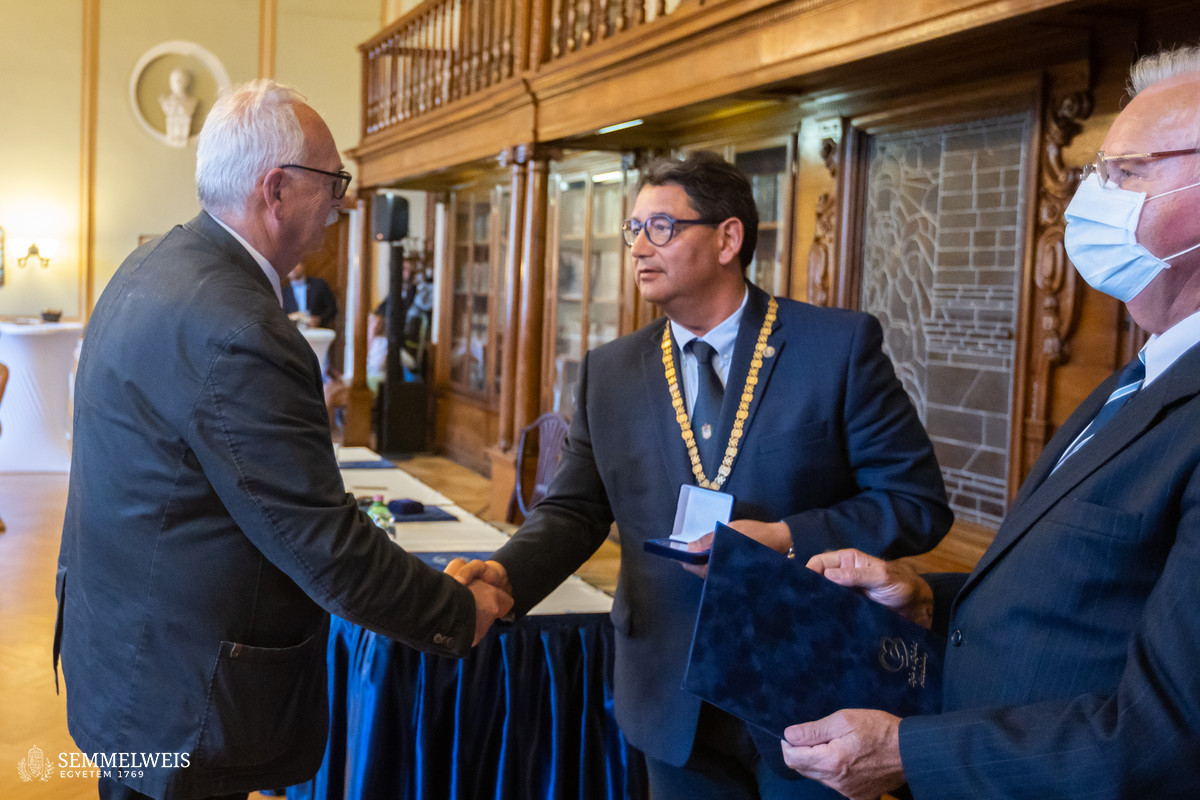 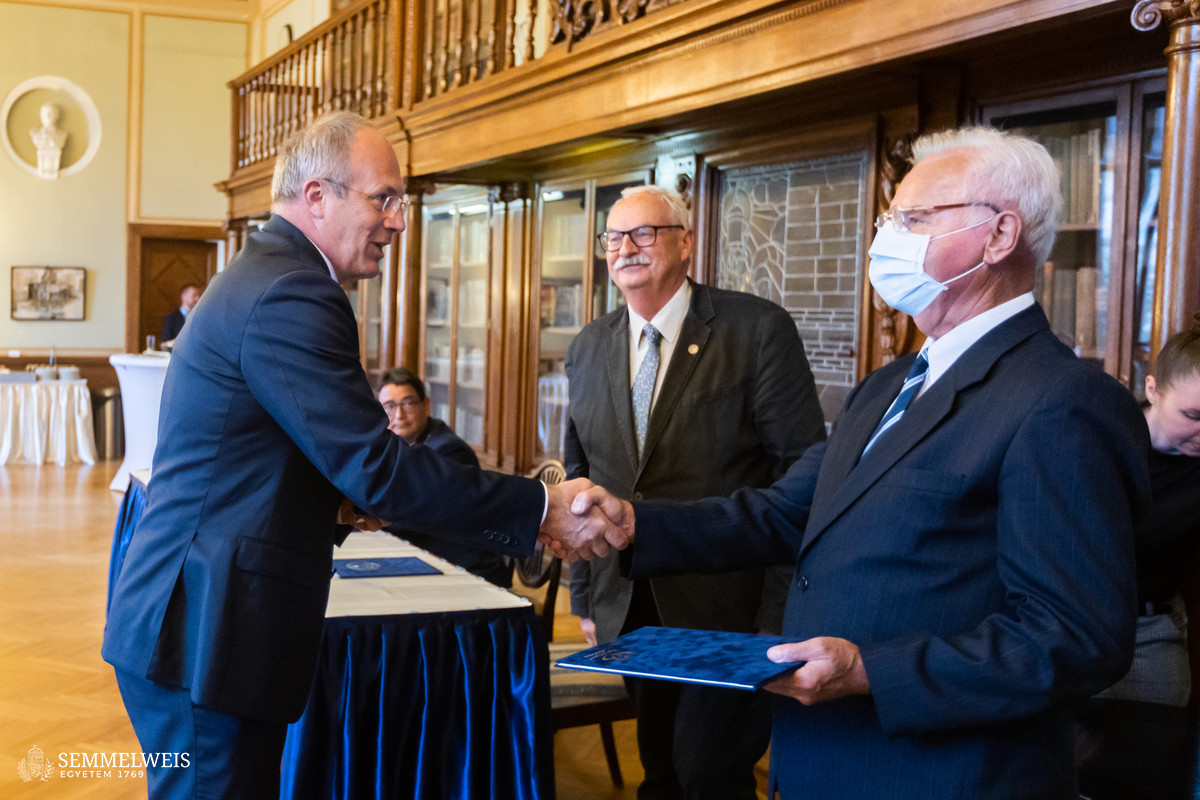 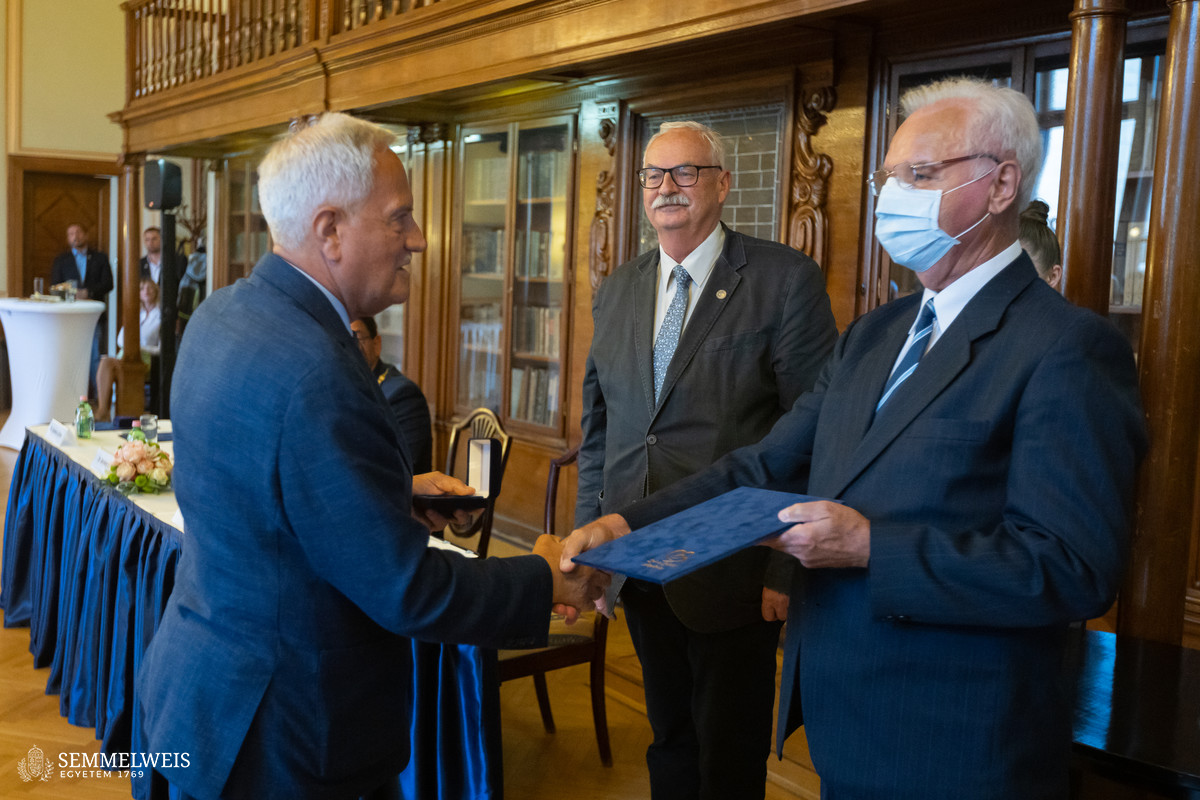 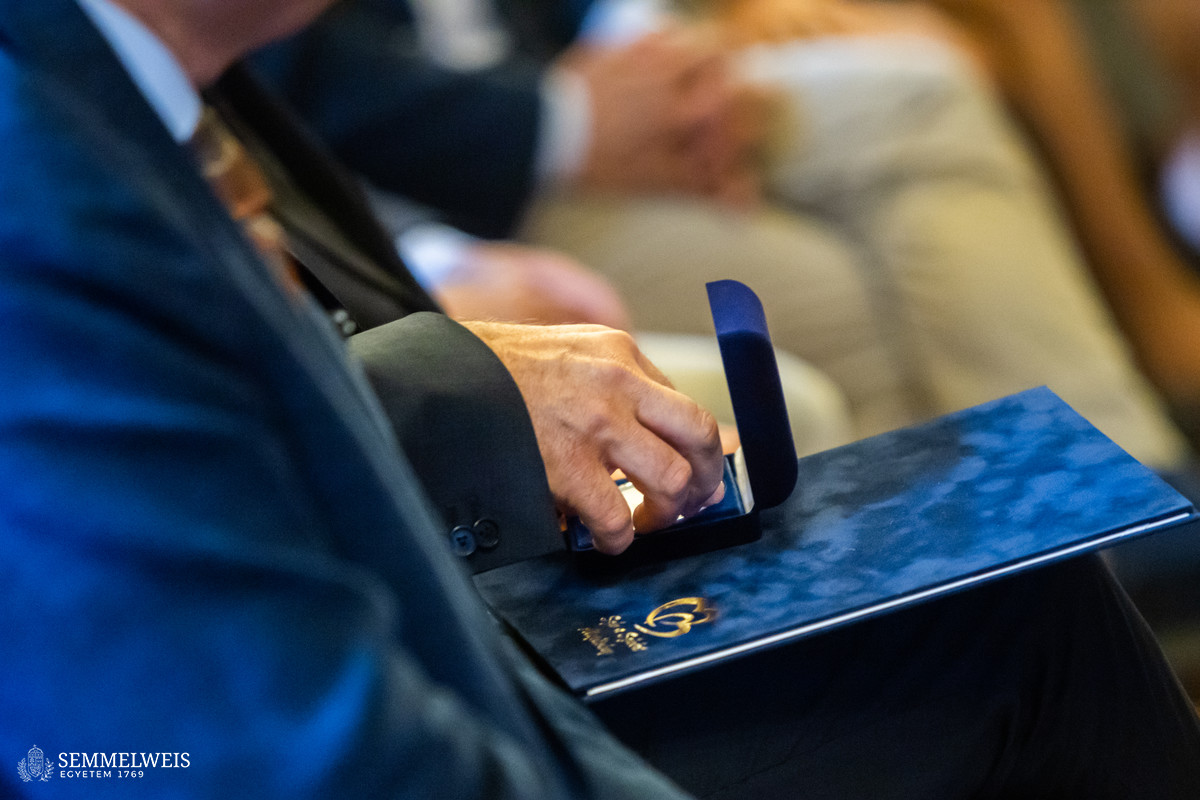 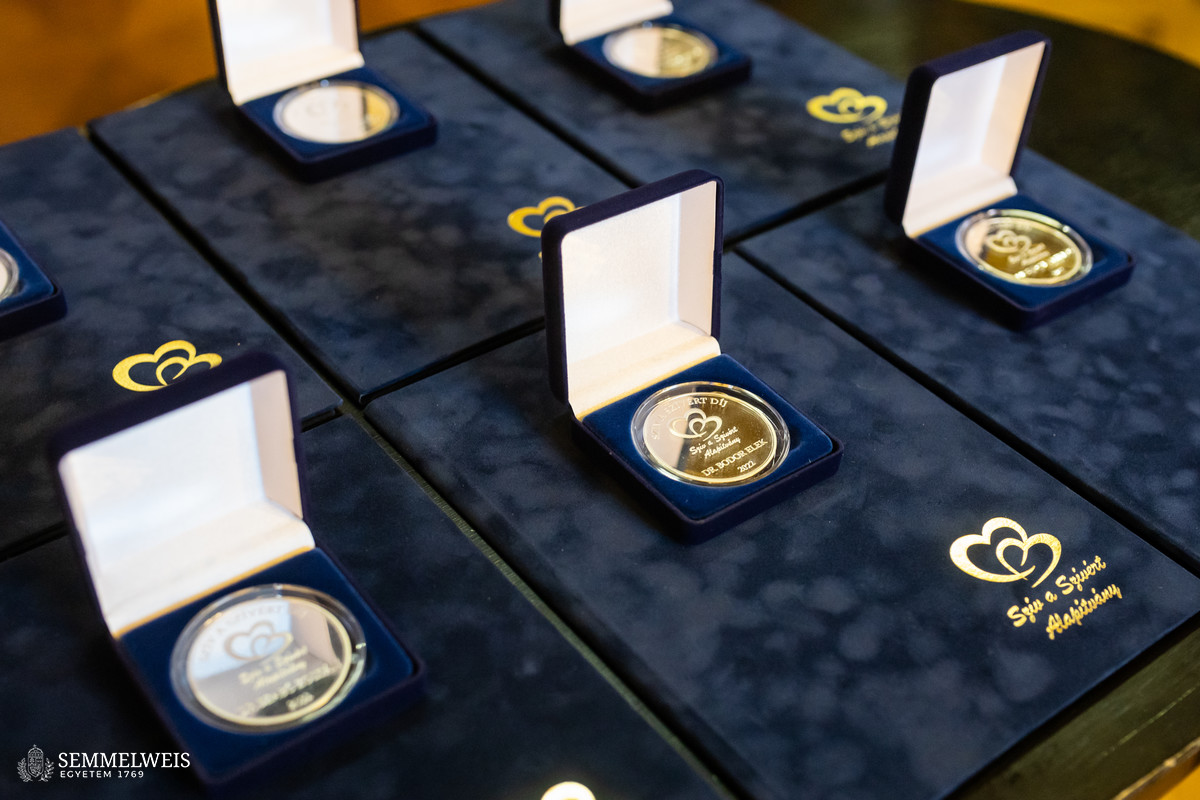 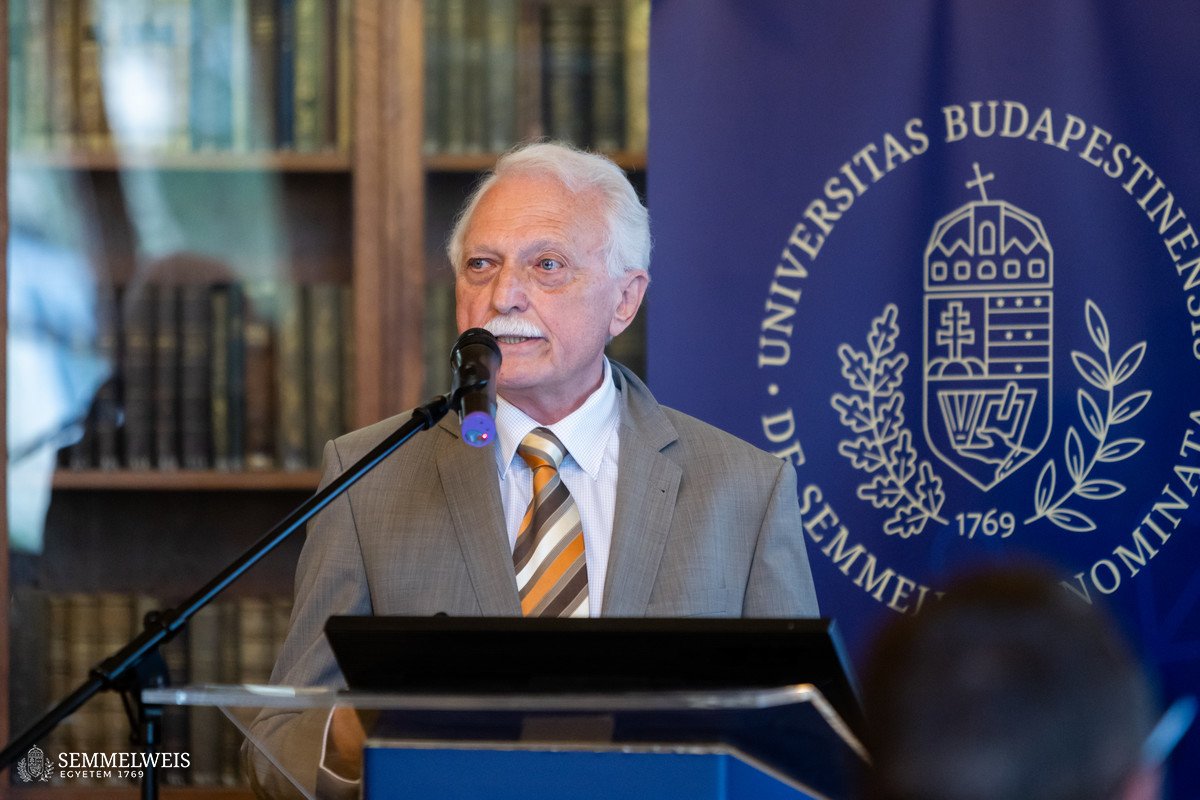 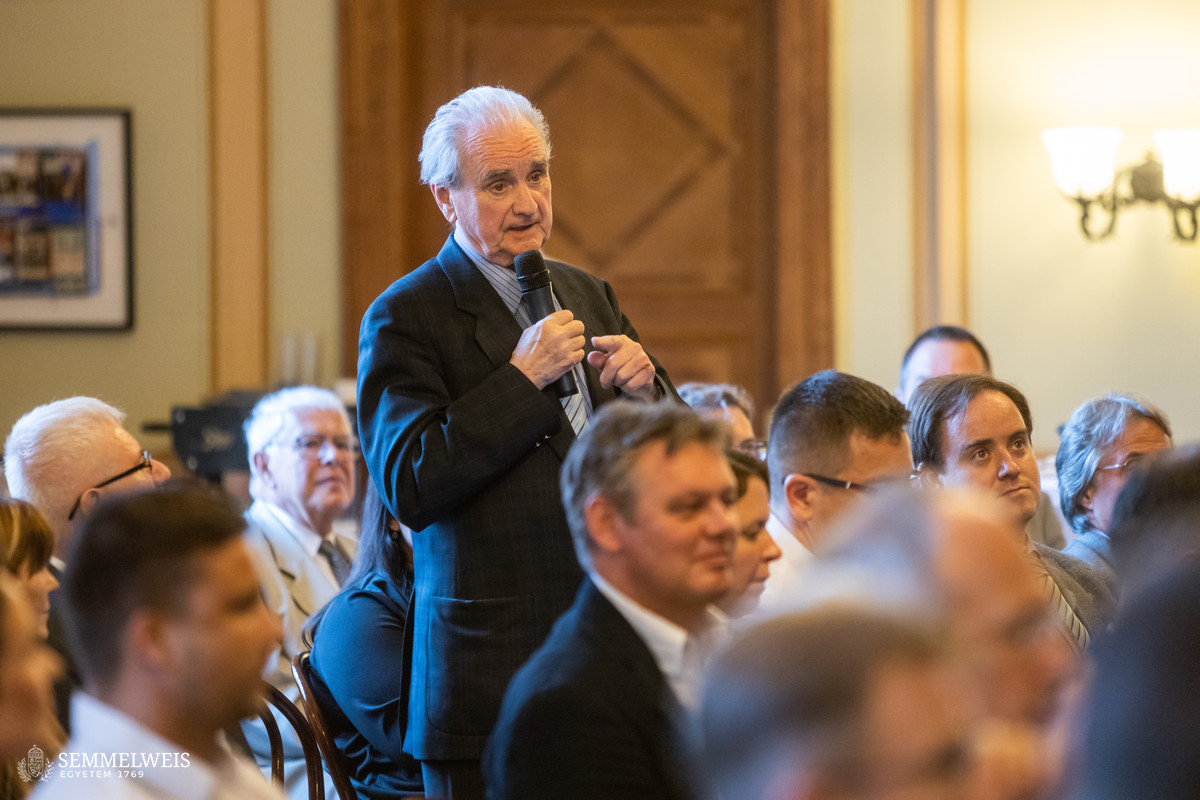 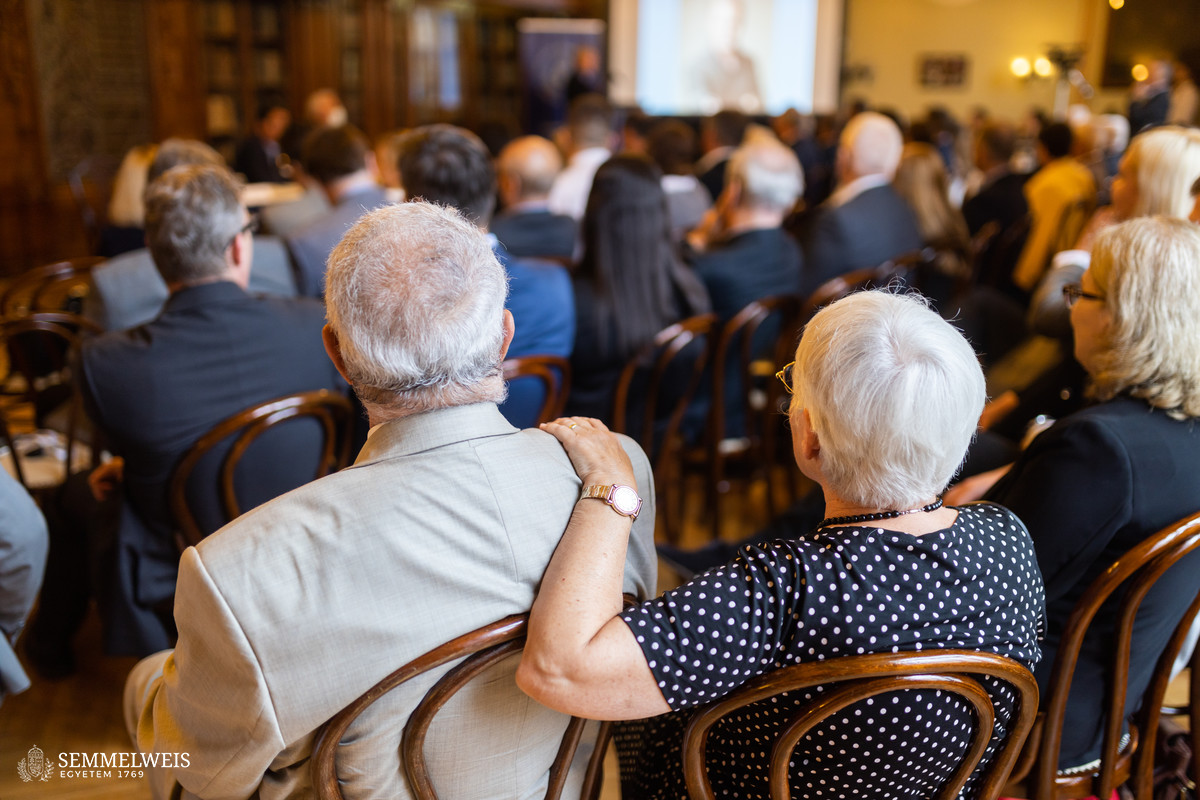 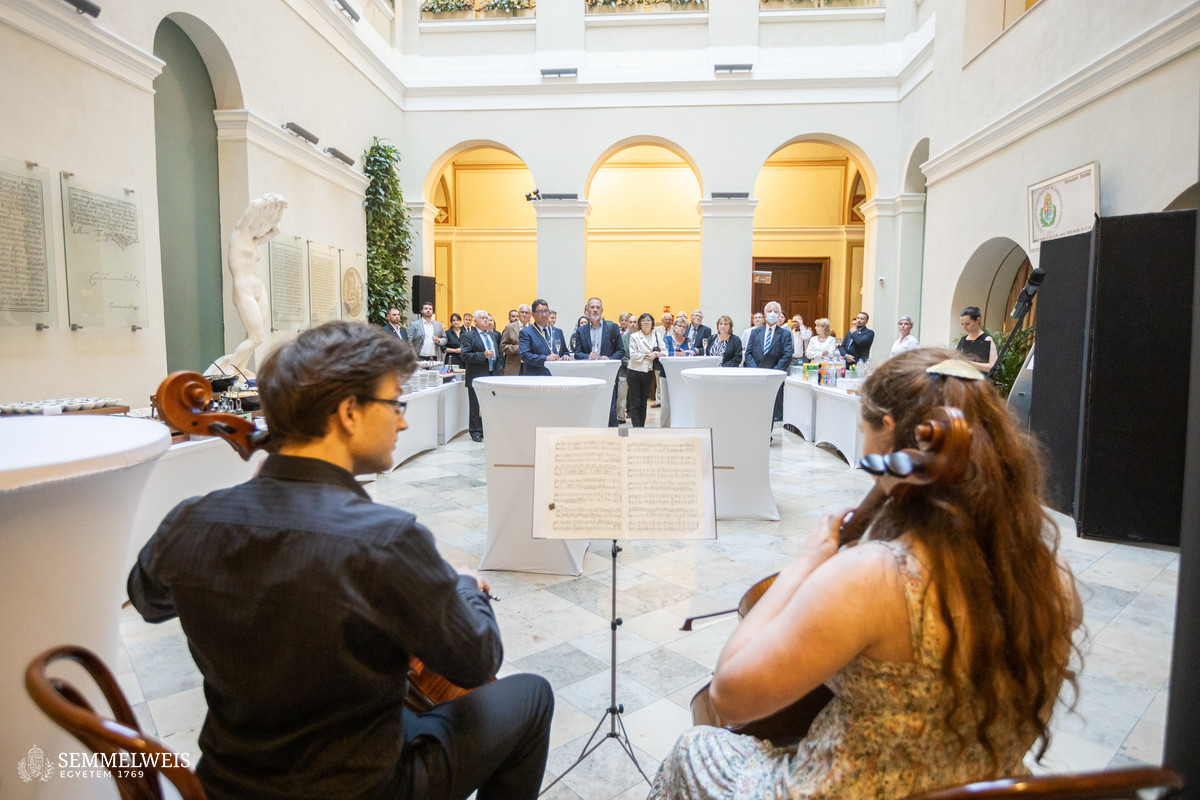 The facts of the first heart transplant recorded in a report
A 23-year-old man who suffered a brain injury on New Year’s Eve died of brain damage at 12:20 pm on January 3, 1992. The National Institute of Traumatology then alerted the Heart and Vascular Centre, to allow the first heart transplant in the country to take place. At 15:08 pm, the surgeons of the clinic removed the heart of the deceased young man. The procedure took just 12 minutes. The heart was transported to the clinic by an ambulance during the afternoon rush hour. In the meantime, a 28-year-old man was prepared for the removal of his diseased heart and the implantation of the new one as a recipient. The donor heart was beating again at 18:45 pm, but now inside the body of the young man who had undergone the operation. The cold ischemia time was 128 minutes, and the total duration of the operation was 310 minutes.

After receiving the silver medals and certificates, the award winners present also spoke. Dr. Szabó Zoltán Szabó’s son, Dr. András Szabó, thanked the recipients for not letting his father’s career and work be forgotten. Dr. Béla Merkely pointed out that the medal bears a portrait of Dr. Zoltán Szabó on one side, so it will always be a reminder of his mentor and master, who was one of the main creators of the scientific hub in Városmajor. “It will continue on this path and become the most outstanding cardiovascular university in Europe,” he said. Dr. Elek Bodor recalled a study trip to Vienna in 1984, where in front of a poster showing the first nine heart transplants in Vienna, Dr. Zoltán Szabó said: ‘We can do this. Let’s get on with it, and organise it’. In January the following year, they had assigned tasks already, and started learning and preparing.

Dr. Zoltán Szabolcs emphasized that through him, the award addresses many of his colleagues, as transplantation is always a team effort. He thanked Dr. Tibor Gyöngy, who was present during the first operation, and Ágnes Petrohai, who took care of the follow-up treatment. He expressed his gratefulness to be part of this story of 30 years: in a way, Dr. Zoltán Szabó handed over the stafeta to Dr. Elek Bodor, which he then received, and is slowly handing it over to Dr. István Hartyánszky Jr. Dr. Miklós Szócska thanked the medical society for their trust and the patient organisations for their cooperation, which was essential for joining Eurotransplant. Dr. Hartyánszky István said that finding the right donor heart for tiny babies and children is the biggest challenge. This was one of the reasons why it took so much longer to start paediatric heart transplantation, for which the conditions were established in 2007. In preparation, it helped the team that they were able to participate in a number of adult transplants and get familiar with the process.

After the award ceremonies, the Medikus Orchestra concluded the celebration. 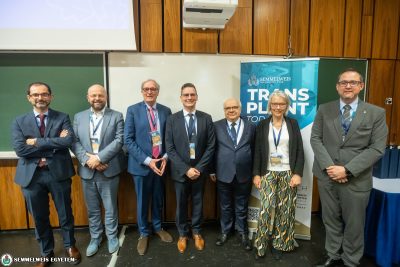 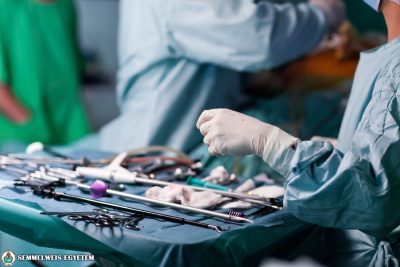 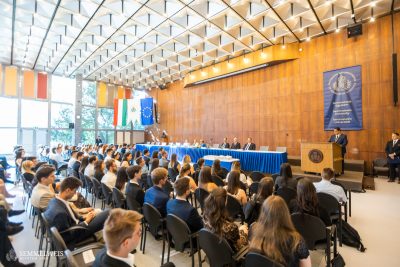