This anniversary is a milestone that is also an occasion for us to define what kind of university we want to build over the next quarter millennium – emphasized rector Dr. Béla Merkely, who believes the university of the future has to operate in a more flexible structure, more practically and more innovatively. One of the most important goals of the 10-month series of events celebrating the 250th anniversary of the university’s founding is to address as many people as possible; in addition to programs aimed at university employees, there will also be events for the public as well as a Semmelweis international scientific week that will be a prominent point of the event series – said Dr. Balázs Hankó, vice-rector for strategy and development, who is in charge of the professional management of the memorial year. 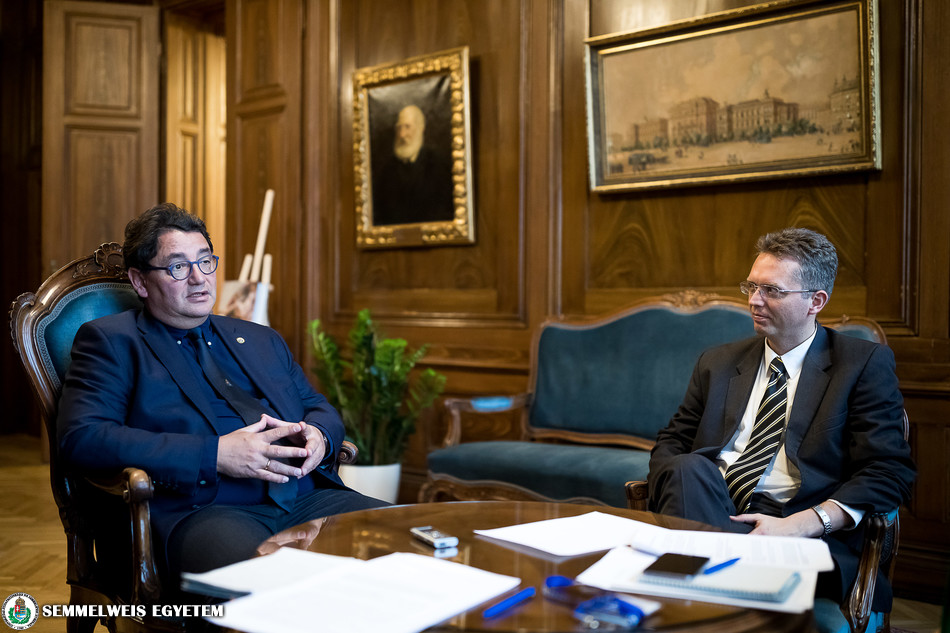 We are starting to build the next quarter millennium – said rector Dr. Béla Merkely, who gave an interview to our website on the occasion that there are exactly 250 days left until the memorial year celebrating the 250th anniversary of the university’s founding begins. He pointed out that today Semmelweis University is among the top 500 universities in the world, and it is one of the best institutions of higher education in Central Europe, where internationally recognized medical and health sciences education is conducted. The anniversary is a milestone that provides an opportunity to take stock of what we have achieved so far, but it is also a good occasion to define what we want to achieve in the period ahead – the rector said, adding that the relationship between theory and practice has to be substantially strengthened if we wish to be competitive and not remain stuck at this level. The university of the future has to be more practical, more innovative and more flexible, because knowledge in the area of medical and health sciences education practically doubles every two years, he noted. He emphasized that together with the vice-rectors, their common goal is that the university should not just follow these trends, but be an active participant in generating new knowledge. It is important for Semmelweis University, both at home and abroad, to be an active player in academic life, where new achievements, new procedures, new patents are created. In order to achieve this, however, clinical practice within education must be strengthened, infrastructure has to be further developed, and we have to be truly innovative on every level, the rector pointed out. Of course, this also means that we need more room to maneuver and a more flexible structure, he added. 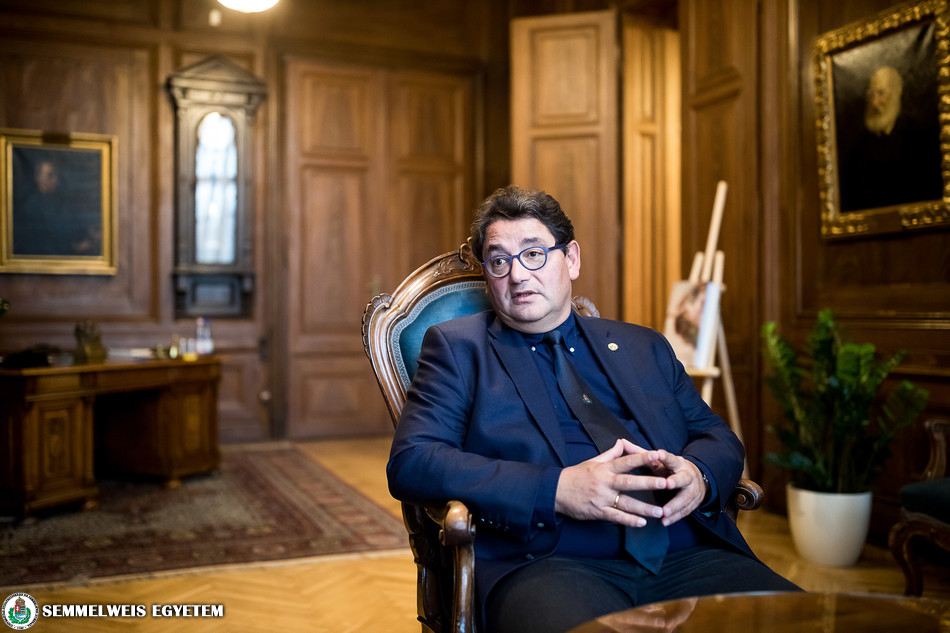 According to Dr. Béla Merkely, a paradigm shift is required and it must be made clear that at a university that deals with medicine and health sciences, the work in health care also serves education and research. Of course, this also means that patients arriving at the various departments and clinics – as can be expected from a peak provider institution – receive the highest quality care, while in various fields, certain procedures are only available at the university. Additionally, the establishment of a system of incentives is necessary on the level of individuals, as well as that of clinics, institutes and faculties, that motivates everyone to provide the best education, research and health care services possible. We have to motivate every employee on an individual level to bring out the best and the most from their working hours. Innovative thinking that represents renewal and development should permeate daily life; when we are healing or educating, we should constantly be thinking of innovation, of how we can make our work even simpler, faster and more efficient, he said.

So Semmelweis University’s 250th anniversary should be intertwined with the “Semmelweis top 100” development strategy, the rector summarized. Dr. Béla Merkely said it is especially important that as many people as possible identify with the memorial year as their own, both within and outside the university.

In addition to this being a significant jubilee on a national level, since we are celebrating the 250th anniversary of organized, continuously operating medical training in Hungary, it is also an excellent opportunity to strengthen the internal Semmelweis community of the university, to revive traditions and launch value-creating processes – said the professional director and coordinator of the memorial year festivities, Dr. Balázs Hankó, vice-rector for strategy and development. The anniversary memorial year will begin on September 1, 2019 with the opening of the 2019 academic year, and end with Semmelweis Day, the birthday of Ignác Semmelweis (July 1, 2020), which marks the end of the academic year, the vice-rector revealed. The anniversary year’s work will be aided by an advisory body comprised of the university’s former rectors, as well as its noted professors and employees, while a committee established specially for this purpose will coordinate operative tasks.

Dr. Balázs Hankó mentioned among the anniversary memorial year’s most important goals the presentation of Ignác Semmelweis’s legacy, as well as the history, present, role in society and future plans of Semmelweis University, and improving the international recognition of the university and thus the entirety of education, research, innovation and health care in Hungary. He emphasized that the goal is to reach as many people as possible with the various programs, thus there will be family events for workers, prevention and interactive events for the public, as well as cultural and scientific symposiums, and a series of peak events linked to the university’s three main areas. Especially notable among the latter will be the Semmelweis series of scientific programs.

With regard to the specific plans, the vice-rector said that the education peak week will begin with the start of the academic year, for which they plan to invite several of the university’s honorary doctors to hold lectures and perform operation demonstrations across the university within the framework of an elective course. The scientific peak week will be held between November 4–8, 2019, which is when we will hold the Semmelweis Symposium, the Doctor Honoris Causa ceremony, as well as the awards ceremonies for the Semmelweis, Huzella, and Jendrassik medals and awards, the Hugonnai Medal and the Semmelweis Budapest Award – Dr. Balázs Hankó enumerated.

The program linked closely to clinical practice will be the Semmelweis Nights event series for the wider public. During the memorial year, we will hold a series of interactive, prevention-oriented, scientific-information as well as health education programs aimed at the public on five occasions at the university’s five different locations, emphasizing that following the example of Semmelweis, we don’t just teach the importance of prevention but we also practice it and propagate it, said Dr. Balázs Hankó.

It is important that university employees also learn as much as possible about the history of the university and its namesake. Serving this purpose are the series of articles on the university’s history in the university newspaper that has already started, the Semmelweis Memorial Museum, plans to set up a memorial room, as well as a publication under preparation, edited by rector emeritus Dr. Péter Sótonyi, that will commemorate the university’s 250-year history on 250 pages, with 250 photographs.

Starting today, a counter at the top of the university’s website will show how many days are left until the anniversary year starts. The graphic design of the counter that will start from 250 days on December 25 was provided as a gift by Fps ecosystem, who also designed the university’s new website, for the university’s 250th anniversary, while the technical implementation was carried out by the Directorate of Informatics. 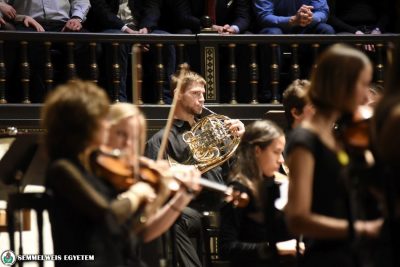 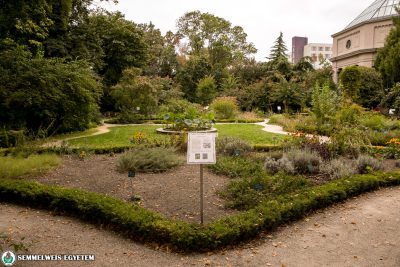 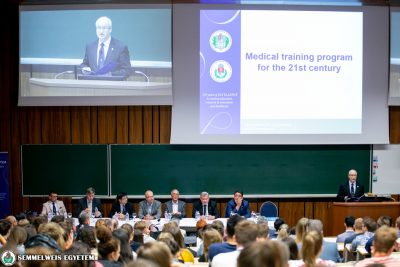