The delegation of Shanghai University of Traditional Chinese Medicine and Gedeon Richter’s Chinese affiliate paid a visit to Semmelweis University. Besides the general introductions of the two institutions consultation aimed at the identification of the possible areas cooperation. 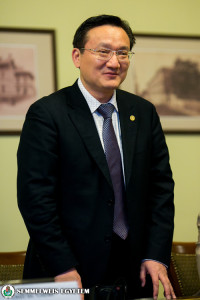 ai University of Traditional Chinese Medicine (SHUTCM) was founded in 1956, thus being the first university in China dealing with traditional Chinese medicine. The institution has 8 faculties, 6 departments, 6 affiliated hospitals, 19 research institutions and 13 research centres; its hospitals treat 10 million outpatients and 120 000 inpatients annually. Currently there are 11 000 students at the university, out of which 1 100 are foreign students mainly from south-eastern Asia. The university’s main disciplines are “Chinese Materia Medica”, dealing with the research, production and development of phytotherapeutic medicines, “Chinese Medicine”, focusing on the treatment of diseases using only traditional Chinese methods and “Integrated Medicine”, which blends western and Chinese medical practices. The university ranks top 3 in China regarding all three disciplines.

SHUTCM has an extensive network of international relations. Within the framework of the cooperation with WHO (World Health Organization) the university acts as the centre for traditional Chinese medicine, while in collaboration with ISO (International Organization for Standardization) equipment and ingredients for medicines are being standardized. They have also expanded their activities to the USA by having opened the first Confucius Institute in Georgia in 2014.

After Rector Ágoston Szél’s welcome address, Dr. Mária Judit Molnár, Vice Rector for Scientific Affairs gave a presentation on Semmelweis University. She went into details regarding Semmelweis University’s Chinese relations, including those of with Putuo District Central Hospital and Heilongjiang University of Traditional Chinese Medicine. The meeting was also attended by Dr. Zoltán Zsolt Nagy, Dean of the Faculty of Health Sciences and Dr. Gyula Domján, Vice Dean for Clinical Affairs at the Faculty of Health Sciences.
The Chinese party were keen on receiving details about the special training programme in cooperation with Heilongjiang University, which provides students with the first four years of study at Semmelweis University and a final, fifth year in China to implement their theoretical knowledge in an authentic Chinese environment. Semmelweis University’s cooperation with Putuo District Hospital was of great interest, as it is one of SHUTCM’s six affiliated hospitals. Dr. Marcel Pop, Director of International Relations said that according to the recently signed Memorandum of Understanding the partnership would be launched in effect at the beginning of the academic year of 2015/16 by the reception of 20 Chinese students. Semmelweis University suggested extending this agreement to the whole of SHUTCM which was welcomed and supported by the Chinese partners. 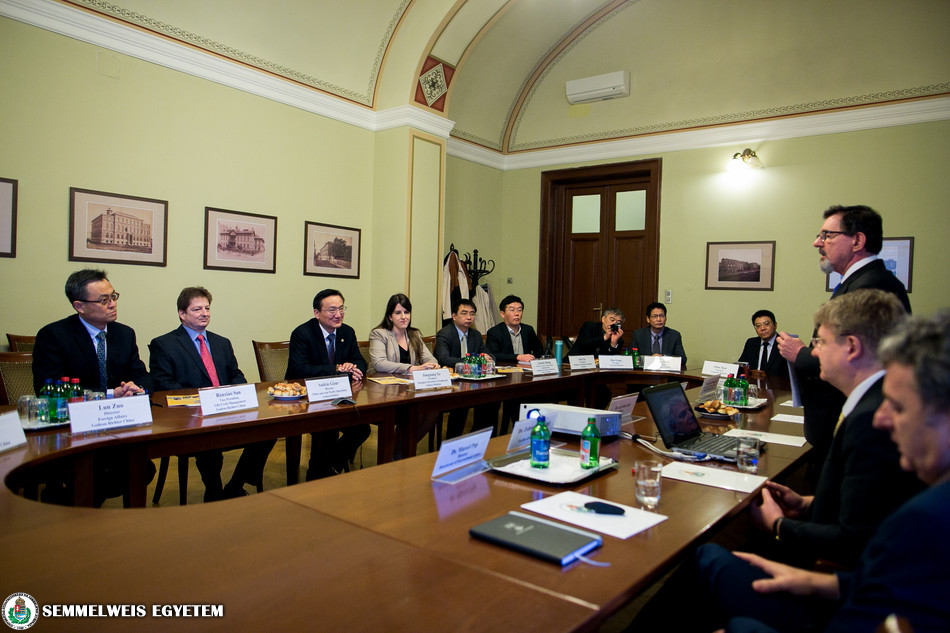 The consultations are to be continued in the autumn to discuss the expansion of the already existing agreement and possibly sign a Memorandum of Understanding. The Chinese partner emphasized the benefits of such cooperation as their university ranks among the top Chinese universities and Semmelweis University’s experts could greatly contribute to the innovative activities at SHUTCM’s hospitals and clinics.

The meeting was organised by the pharmaceutical company Gedeon Richter. András Gizur, Director of China and Asia Pacific Operations at Gedeon Richter said that their company would gladly contribute to the development of Hungarian-Chinese relations. As there is a strong collaboration between Semmelweis University and Gedeon Richter in the field of PhD studies, the development of a trilateral partnership among the three institutions was also put up to discussion. Based on SHUTCM’s proposal the institutions could cooperate in the innovation of phytotherapeutic products.