The delegation of Semmelweis University has visited two Chinese universities and also participated in a conference about Traditional Chinese Medicine. Our institution was represented by Dr. Zoltán Zsolt Nagy, Dean of the Faculty of Health Sciences and Dr. Marcel Pop, Director of International Relations. The major aim of their visit was the reinforcement of the current partnerships with Chinese institutions, the establishment of new research collaborations and the continuation of the previously started negotiations related to Traditional Chinese Medicine (TCM) education. Dr. Yu Funian, a guest lecturer of the Faculty of Health Sciences and appointed commissioner of the TCM education of Heilongjiang University in Hungary as well as Dr. Xia Linyun, Teacher of TCM of the Faculty of Health Sciences also joined the delegation. 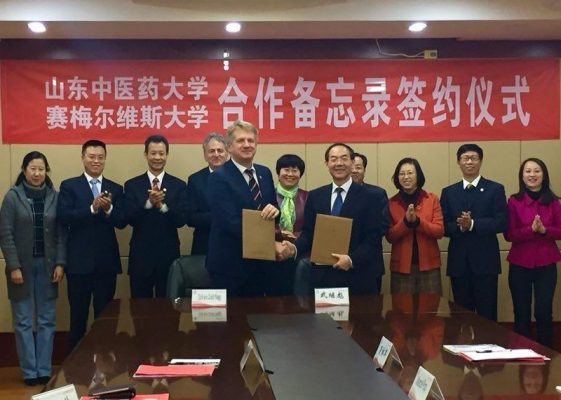 Almost 4000 participants attended the four-day conference entitled Internationalization of Traditional Chinese Medicine from all over the world. In the framework of the conference, the delegation of Semmelweis University introduced their experiences, practice and plans related to TCM. On the basis of the feedback provided by the representatives of the profession, Hungary has achieved great results with the introduction of TCM as well as with the establishment of legal environments and the regulations of TCM education. Dr. Dong Zhi Lin, President of the conference, offered his assistance in the planned establishment of the educational-, research-, and supply system of the Faculty of Health Sciences based on the model in Amsterdam that has been working successfully for many years. Dr. Dong Zhi Lin also holds several leading positions in the European TCM organizations and worldwide, too.

During their official visit in China, Dr. Zoltán Zsolt Nagy and Dr. Marcel Pop visited Shandong University of Traditional Chinese Medicine (SDUTCM). One of the major aims of the visit was the signing of a Memorandum of Understanding, of which the preparations were arranged earlier and mutually accepted by both partners, and also the discussion of the conditions of the collaboration. The members of the delegation also visited the university’s two hospitals, which deal with TCM education and where several hundred patients are being treated on a daily basis. On the occasion of this visit, the representatives of SDUTCM and Semmelweis University mutually agreed on the gradual establishment of the cooperation, which would be focusing on teacher exchange primarily. The financial framework for this mutual exchange would be supported by the sources provided by the Erasmus+ Program. The invitation of the representatives of Semmelweis University was preceded by the discussions during the meeting with the China-CEEC Hospital Cooperation Alliance held in Hungary in June. 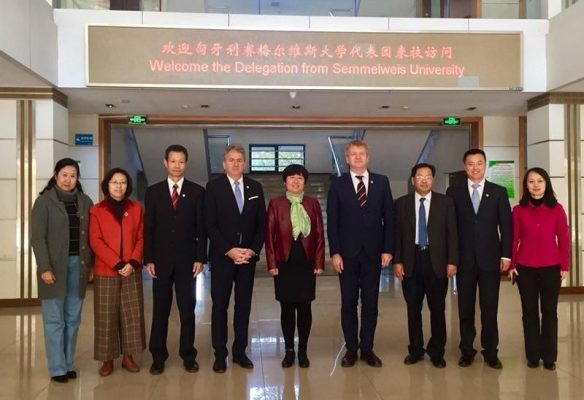 The delegation continued their discussions with Shanghai University of Traditional Chinese Medicine (SUTCM) at the invitation of Dr. Xu, President of the SUTCM university, which was a highlighted event of the program. The representatives of the two universities met several times earlier before, both in Budapest and in Shanghai. In 2017 a Memorandum of Understanding was signed about the collaboration of the two institutions. During this most recent meeting in Shanghai, Dr. Zoltán Zsolt Nagy, Dean introduced the project related to the new building wing of the Faculty of Health Sciences and he elaborated on those areas where Semmelweis University intends to concretize the cooperation. As a result of the successful negotiations, Professor Xu offered a guest lecturer status to Professor Yu Funian and he also expressed his wish to fill the MoU with content as soon as possible, namely with student and teacher exchange programs as well as with the initiation of research projects.