With the support of the Hungarian Brain Research Program the research group tries to identify new drug targets for the treatment of depression. They are mapping the entire genome searching for unknown genetic variants that could lead to the development of the disease.

According to the World Health Organization (WHO), depression could be the most serious public health problem of the world by 2030. Although the efficacy of the currently used drugs is considered acceptable, approximately half of the patients do not show significant improvement in the symptoms after the first treatment. This phenomenon is explained by the different genetic backgrounds and biological pathways in each person. It can be seen as various forms of the same cake (i.e. cherry pie). Although the ingredients and method of making are similar and in any case we call the result cherry pie, the flavors and appearances of the cakes will be different from each other. The situation is quite similar to people suffering from depression. The disease itself is just an umbrella term. Because of this, the treatment which is effective in a patient will be ineffective in another due to differences in genetic and/or environmental factors. Thus, the development of new medicines that affect new drug targets is vital. The aim of the research group led by Prof. György Bagdy is to find these new potential drug targets.
A previous project supported by the European Union (NewMood) provides the starting point to the current research. During this program DNA samples were taken from the test subjects who also had to fill out a questionnaire package about their personality. The NewMood studies not only involved healthy persons and diagnosed patients, but the depressed people in state of transition as well. These examinations play and important role in identifying the biological pathways causing depression. The research will help to develop and apply new drugs specifically to each patient or patient-group, which is the so-called personalized medicine. 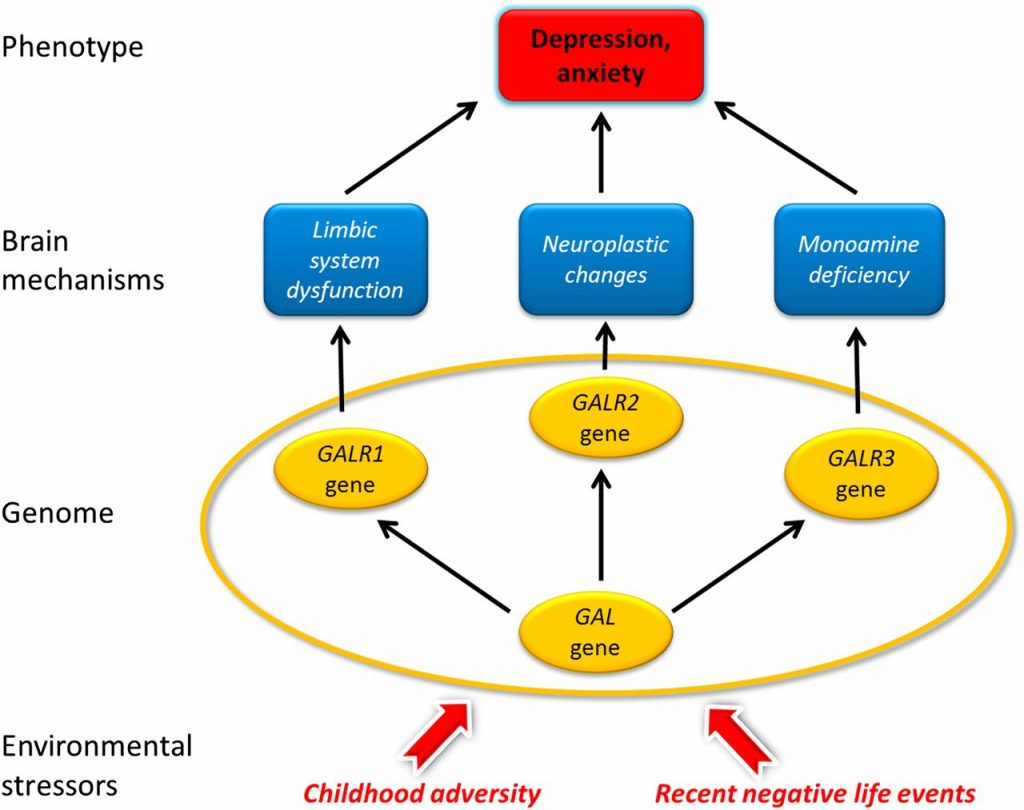 According to the prediction of World Health Organization (WHO), depression will be the biggest public health problem in the world by 2030. Although, the efficacy of current medications against the disease is acceptable, around half of the patients do not respond to the currently used pharmacological interventions. The research group led by Prof. György Bagdy, which attempts to identify new, potential drug targets with modern genetic-genomic methods that help the development of drugs with novel mechanisms of action.
The current research was based on a project (NewMood) supported by the European Union in which approximately 2500 volunteers took part from Budapest and Manchester. The participants gave DNA samples and filled out a questionnaire package containing questions of mental health. While most of the researches are based on the comparison of healthy and already diagnosed individuals, NewMood broke this tradition as it involved persons in the state of transition. This is advantageous because the symptoms of depression more or less appear in healthy people, so the measurement of these effects provides an opportunity to get to know the biological pathways of the disease.
During the research the group used the high-throughput microarray technology, which can identify millions of alleles, to map the genetic background of depression. With genome wide association study (GWAS) the researchers attempt to understand the interactions between depression and the genetic variants. If they identify these influencing genes in depression successfully, the proteins encoded by them, could play an important role in the development of depression. Thus, the recognition of the identified proteins helps to define new, potential drug targets. Specific information technology methods are also needed to analyze the vast amount of data from the measurements.

After the genome wide genotyping the researchers built a database of more than 2 million data entry about each person, which is considered to be the biggest database of its kind in Hungary. After analysis of the data, the group demonstrated that some of the polymorphisms of the genes in the folate pathway (MTHFR, MTHFD1L) can predispose to rumination, a risk factor for depression. Thus, the folate can be viewed as a preventive substance against depression through the reduction of the repetitive negative cognitive mechanism. Further results show that polymorphisms of NOS1 gene influence nitric oxide transfer in human brain, and combined with financial difficulties increase the risk of depression. In addition, the examination of the serotonin transporter gene (5-HTTLPR) revealed that it is not directly related to depression but to anxiety, and its effect on depression only occurs under serious stress. In the brain of rats the use of venlafaxine as an antidepressant drug caused enhanced gene expression of proteins that create and restore neurons and their connections. The latter study through the identification of biological pathways behind current drug therapies may refine our image of present antidepressant drugs.