Number of vaccines administered at Semmelweis University - 24. May 2022
More information 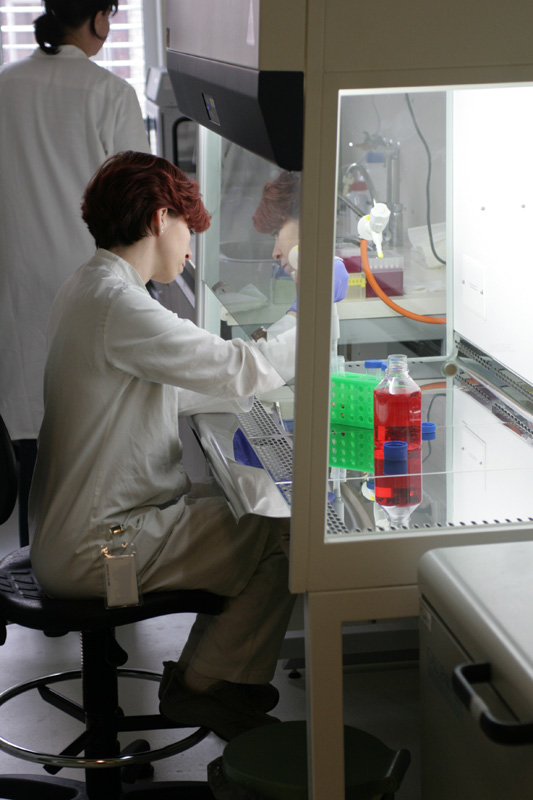 Research performed in the Nanochemistry Research Group is divided between the Biocolloids and Soft Materials laboratories.

The laboratory’s main purpose is to assembly, physical-chemical characterization and functionalization of biocompatible colloidal systems. The produced systems are subsequently assessed for possible biomedical applications.

The laboratory’s primary research area is the study of ferrofluids. Magnetic fluids or ferrofluids, as they are often called, consist of nanosized magnetic particles. In case of superparamagnetic iron oxide nanoparticles the particles are abbreviated as SPION particles. The size of the dispersed particles is controllable in the ranges from a few nanometers up to tens of nanometers. These types of fluids can be manipulated via an external magnetic field. In an inhomogeneous field, the particles move together with the medium. Separation of the particles e.g. sedimentation via gravitation forces is not possible if the particle size range is under 100 nm. The magnetic particles are often composed of iron oxides. The most frequently used forms of iron-oxide are magnetite and maghemite which are abundantly found in nature occurring as minerals.

Advancements in the synthesis and stabilization of dispersions of superparamagnetic iron oxide nanoparticles, promoted their use in many biomedical applications such as magnetic separation, drug delivery, hyperthermia, and MRI contrast agents. Water based magnetic fluids were first designed to be applied in the medical and biomedical fields thus, the dispersed nanoparticles had to meet strict prerequisites. One of the most important criteria is toxicity.

Soft materials are defined as materials that will suffer deformation caused by their own weight upon removal from their structure preserving environment.

The latter, contrary to the fluids, upon removal of the gravitational forces they are able to regain their initial structure. Materials with these properties are polymer hydrogels.

One exclusive feature of polymer gels is being able to exist in a thermodynamic equilibrium with their environment. In this regard if any of the environmental parameters is altered (e.g. temperature, pH) so does the hydrogel’s swelling degree and thus its properties (solubility, diffusion, mechanical).

The gels primary component is a polymer, whose specific chemical composition design (ratio between hydrophobic-hydrophilic monomers) is how the appropriate swelling degree can be achieved. Gel collapse refers to the sudden sharp change in a gels volume due to external factors and conditions.

Several synthetic cross-linked polymer gels have these properties. Aim of the cross-linking structure is to adjust the parameters  of the gel collapse ( collapse temperature, volume increase or decrease).

Furthermore, part from temperature changes gel collapse can be elicited by changes in the pH and the chemical environment.

The significance of the gel collapse lies in ability of the gel to transport and subsequently release molecules previously enclosed in itself upon reaching a specific environment.

Today numerous examples of gels used for regulated  drug release exist, for example the quite popular one poli-(N-izopropilakrilamid) (pNIPA) gel

In the field of biomedicine, pharmaceutical and cosmetic applications, limitations are established if the gel is non-absorbable, if it induces harmful effects or perhaps the by- and end- products are harmful.

Another method to achieve a regulated drug release is to synthesise a cross linked polymer gel that is dissolved only when external forces are applied e.g. thermal, electric while concurrently none of the polymer’s by- and end- products do not elicit harmful effects. Nevertheless, research involved with these types of polymer systems is still in an early phase.

According to the needs of the specific application, from these polymer systems, gel spheres ranging between 50 nm and a few micrometres or macroscopic sized membranes will be developed. We would like, the developed polymers to be combined with an appropriate chemical agent or substance allowing regulated transport and release in pharmaceutical, dermatological and cosmetic applications or even binding/release of environmentally harmful substances. For the realization of the aforementioned applications, research and study of the gels structure and transport processes is essential.