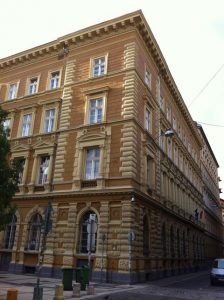 The Department of Community Dentistry was founded on the 31th of March in 2013 as a legal successor of the Central Stomatological Institution. Being the newest, largest department of the Faculty of Dentistry of Semmelweis University it integrated into the structure of the Training Center. Currently the department has 68 doctors (both specialists and residents), 63 dental assistants and hygienists working as employees. The building itself houses 30 dental chairs on which the treatment of patients is performed each workday (Monday to Friday) from 8 am to 8 pm. An emergency dental care is available from 8 pm to 8 am and at weekends and holidays. The institution takes part in both undergraduate and postgraduate training. The structure and design of its departments are following the requirements of the principles of Community Dentistry. The aforementioned departmens that partake in the treatment of patients are the following:

The institution serves as a teaching hospital and offers aid in diagnosing, treating and scientifically adressing several dental dieseases. Furthermore it houses a practice laboratory for dental technicians. Our department is in corporation with the National Institution of Medical Rehabilitation, the Patronae Hungariae School Centre and the Pető András Collage, the latter resulting int he foundation of the Pető András Faculty of Semmelweis University.

The Director of the Department of Community Dentistry, Professor Péter Kivovics D.M.D., Ph.D., candidate of medicine, special education teacher was appointed Main Director of the Central Stomatological Institution in 2012. His aim was the integration of the Institution into the Faculty of Dentistry of Semmelweis University which he succesfully fulfilled in record time (9 months). After this he managed to mitigate the debt of the institution to near zero. His work influenced by his own vision and beliefs concerning the role of modern dentistry he managed to elevate the profile of the institution to spread out and cover all dimensions of dentistry furthermore takes part in the training of dental students and postgraduates, dental assistants and hygienists.

The legal predecessor of our institution was the aforementioned Central Stomatological Institution. Following the initiative of János Kende in 1951 the Central Dental Clinic and Postgraduate Education Institution was founded under the adress of 40. Szentkirályi street. After the events of World War II, the doctors of Csengery street’s Dental Department migrated here. 4 years later, followed by a ministry instruction the Institution was bestowed upon the right and the task to train and supervise dental professionals, thus being renamed Central Stomatological Institution. The collective 400 hours of dental care resulted in the drastic improvement of the treatment of patients. The ministry instruction also made it compulsory for each D.M.D. to be a part of a postgraduate training system managed by the Institution and personally Professor Kende. This was the first time dentists could graduate from an entirely separate faculty. By 1955 the faculty counted more than 100 students. After this period Professor Béla Berényi D.M.D. was appointed director of the Institution. Following in his footsteps from 1969 Sándor Orsós D.M.D. took the lead of both the Institution and the newly founded Faculty of Stomatology. He reformed the structure of the professional supervising system. The international recognition of the hungarian dental care is a result of his and his colleague’s work. After the death of Prof. Orsós Péter Vágó D.M.D. and László Bodó D.M.D. took the reigns and led the Institution which at the time was under the management of the Capital Government and the GYEMSZI (todays ÁEEK).

In august of 2012 Péter Kivovics D.M.D. was awarded the title of Main Director of the Central Stomatological Institution. Being the former head of the National Dentistry and Dental Surgery Supervising System with his new title he managed to merge the leadership of both that and the Institution. After a short period of merged functionality the Central Stomatological Institution ceased to exist as a separate body and integrated into Semmelweis University as Deparment of Community Dentistry. Dr. Kivovics was then appointed Director of the newly formed Department.

The quality and relevance of scientific work done at the Institution was elevated ever since it joined the Semmelweis University. Orsolya Németh D.M.D., assistant professor takes part in PhD education. Since its foundation two PhD candidates have succesfully defended their thesis and were awarded their titles at the Institution. Namely they are Dr. Orsolya Németh and Dr. Márton Kivovics. Our employees are often delegated to hold presentations at reputable national and international conferences and postgraduate events.