Establishment of a cognitive test battery with high translational value

The aim of this project is to establish a complex cognitive animal test battery, which is able to identify clinically effective cognitive enhancer mechanims with higher hit ratio and precision than the currently applied methods.

Learning and memory are impaired in several neurological and psychiatric illnesses. The most well-known example for memory loss and mental deterioration is Alzheimer’s disease, but severe cognitive deficits are also observed in e.g. schizophrenia or autism.
The current medical treatments of these symptoms are poorly efficacious. As mental state hugely determines the chance of patients to return to normal life and to regain their working capability, the unmet need for effective cognitive enhancers is very high.
Unfortunately, despite that basic research keeps on identifying newer and newer cognitive enhancer mechanisms, clinical development of these drugs faced 100% attrition rate in the last decade. The factors underlying this considerable translational gap are manifold, but inappropriate selection of molecular targets and low translational value of animal models are certainly major contributors. 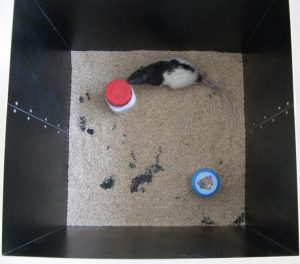 Molecular targets coming out from basic research need rigorous validation in relevant animal models to check their suitability for industrial drug development projects. However, animal models used so far detected a large number of false positive (i.e. clinically ineffective) compounds. The inappropriateness of these methods may lie in their simplicity: impairing a relatively elementary memory function (e.g. passive avoidance or novel object recognition) by a single dose of a pharmacological agent (e.g. scopolamine) may not be a valid model of the robust cognitive deficits characterizing the human disease. More complex paradigms with better face and construct validity should be used. 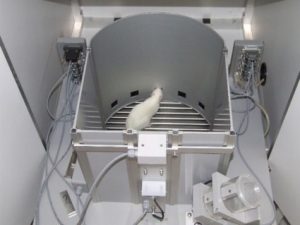 In this project rats and mice are tested in several distinct learning paradigms (see the list of methods). In a subset of the tasks, the learning and memory performance of the animals is measured in a harmless condition (e.g. social recognition test), in other tests the subjects have to “work” for food reward (e.g. reaction time tasks, maze navigation). In a few paradigms, aversive stimuli are used to force the animals to complete the task (e.g. escaping from water). Each task represents a model of a human cognitive domain from those which are usually measured in clinical trials. In order to reach a better cognitive performance, animals are kept in environmentally enriched cages, and habituated gradually to the behavioural task. A group of animals is trained for multiple tasks thereby a population with „wide-spread knowledge” is brought about. 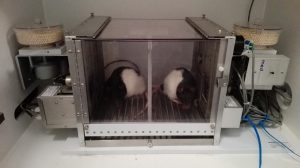 For testing cognitive enhancers, the performance of the animals must be impaired. The mode of impairment is a crucial point in modelling the cognitive deficits of a certain disorder. Learning performance can be disrupted in several ways, e.g. by administration of impairing agents, or by genetic modification, or by exposure to environmental stress. Alternatively, drugs can be tested on animals displaying low performance ab ovo (poor learners, aged animals). By applying a particluar cognitive impairing intervention the above group of animals can be transformed to a ‘patient population’ (i.e. subjects with cognitive defect).

Putative cognitive enhancer compunds can then be tested on the wide spectrum of cognitive functions in this ‘patient population’. This is carried out in a „clinical trial” design: double blind, placebo controlled randomized studies are run with (sub)chronic drug treatments.