Higher education admissions: Semmelweis University is the most popular in the field of health care

A total of 2,269 students were admitted to Semmelweis University for the academic year 2021/2022 when the admission scores to higher education institutions were announced on 22 July. Out of these students, 150 will have to pay tuition fee. In the field of medicine and health sciences, the scores at Semmelweis University were the highest again this year.

“We are pleased to announce that in the field of medical and health science training, Semmelweis University continues to receive the highest number of applications in the first place. We also have the highest scores: depending on the type of training students may need 20-25 points more for a successful admission than in the case of other institutions”, pointed out Dr. Péter Hermann, Vice-Rector for Educational Affairs.

He also added that compared to last year, the number of students in the different training programs increased, and based on the number of admissions, all faculties were able to use their maximum capacities. According to Dr. Péter Hermann, a lot more students apply for the university’s popular training programs than there are seats, which ensures that the university has the opportunity to admit the most talented applicants. 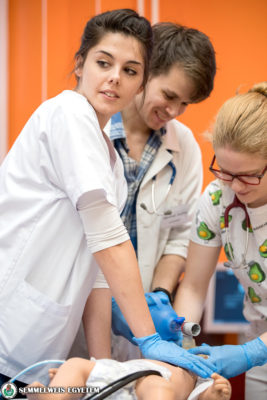 He also added that this also indicates that the academic performance of students admitted to the university is far above the national average. As the Dean pointed out, they are optimistic about the academic year ahead.

“The Faculty of Health and Public Administration participated in the current admission process with one bachelor and three master’s programs. The number of students admitted has increased significantly this year compared to last year’s number of 95: this year 167 students have been admitted. The increase is due to the fact that the Health Care Manager Master’s Program will be offered in the framework of a full-time training as well in addition to the previously available long distance training. In addition, admission to the master’s program in interdisciplinary family science has also been announced for the first time. This year we were able to admit 15 more students for our bachelor’s program in health care management, however, all three of our institutes also plan to announce additional admission procedures for the remaining few places”, pointed out Dr. Judit Lám, Vice-Dean for General Affairs at the Faculty of Health and Public Administration.

“While the number of applicants for health science training programs has decreased on a national level, the highest number of first-year students of all time will start their studies from September at the Faculty”, pointed out the Dean.

The highest score, 434 points, was required for the physiotherapist training this year as well, while the second highest score with 405 points was required to be admitted for the dietetics training program. According to Dr. Gabriella Dörnyei Bednárikné, the construction of the new premises of the Faculty will be completed by next year, which will ensure a further capacity enhancement. 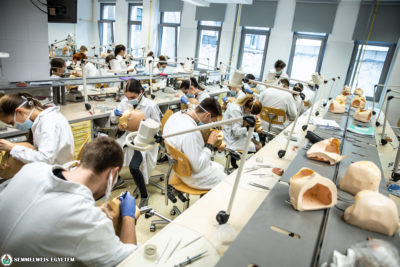 “This year, the Faculty of Dentistry has admitted far more students than usual: 111 students will begin their studies from September in the state-funded program and 5 students will participate in a fee-paying program. Every year, there are students, who re-apply most often when their exam opportunities have run out, so that they still have the opportunity to continue their studies by starting over again. Their admission is extremely disadvantageous for the Faculty, because in spite of their recent successful entrance examinations, they do not continue their studies – by having their previously completed subjects approved – in the first year. This year, 11 students took advantage of this opportunity, but fortunately, the Faculty was allowed for the first time to increase the number of admitted students by the same amount by the Educational Authority, therefore now we do not have any loss as far as the number of possible admissions is concerned”, highlighted Dr. Károly Bartha, Vice-Dean for Educational Affairs at the Faculty of Dentistry.

According to him, due to the unusual secondary school final examinations this year during the coronavirus epidemic, the scores were slightly lowered compared to previous years, but the same as last year’s 426 points. As the Vice-Dean pointed out, Semmelweis University’s Faculty of Dentistry continued to require the highest score limit for admission, therefore the Faculty maintained its leading position among similar training programs.

According to the Dean, this year’s entrance examinations turned out to be slightly less successful than those of last year due to the fact that oral exams were canceled during the epidemic. Nevertheless, the 380 points were required for the university’s state-funded bachelor program in pharmaceutical sciences this year as well. 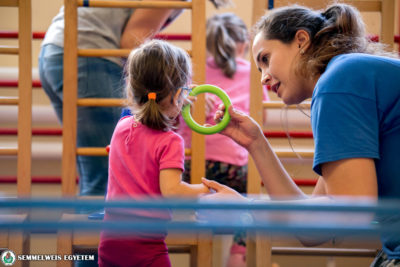 He also added that the increase was necessary because the Conductor BA program is based on several different fields and requires more thorough knowledge acquired in high schools. However, the Faculty still has vacant places for the training, for which an additional admission procedure will be announced in August.

Semmelweis University celebrates the 250th anniversary of its foundation in the academic year 2019/20. Its history started on 7 November 1769, when Maria Theresa added a medical faculty to the University of Nagyszombat, which moved to Buda in 1777 then to Pest in 1784.
On 1 February 1951 the medical faculty of the University of Budapest became an independent institution under the name Budapest University of Medicine and adopted the name Semmelweis in 1969, on the occasion of the 200th anniversary of its foundation.