My University – Gábor Bajcsy and the Cardiovascular Centre

“I used to live opposite the Városmajor Heart and Vascular Centre for a long time, and any time I walked past the clinic, I would think how much I would love to work there. Two of my friends and I visited nearly all clinics in Budapest and handed in our CVs personally. We first came to the Városmajor Clinic and a few days later I was called back and asked to do a trial day at the Cardiovascular Centre”, Gábor Bajcsy, nurse recalled.

Five years has passed since; initially he worked as a patient carrier, then became a nursing assistant and today he is a nurse taking care of approximately 11 patients per day at the Cardiology Unit of the Cardiovascular Centre. 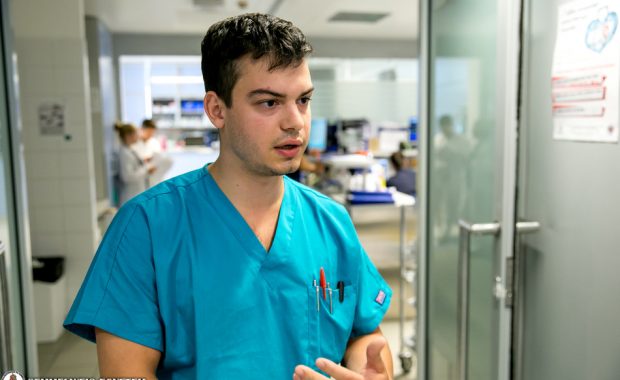 He had never worked in the healthcare sector previously, the Centre is his first workplace, which has greatly contributed to his personal and professional development. That is why he chose it as his favourite place. One of his dearest memories is his first day at work.

“When I first entered the Intensive Care Unit, I was taken aback by the commotion and it seemed that something was always happening every minute. It was scary at first, but the helpful and friendly atmosphere has helped me a lot in settling in. By now, I have definitely grown to like the bustling lifestyle of the unit, which is necessary to take care of the high-risk patients, who are hospitalised mainly because of infarction or heart failure. We often have to act in a fraction of a second.”, Gábor Bajcsy said.

Apart from him there are two male nurses working in the institution, as generally there are fewer men in the profession, even though their number is growing.

It is important for him, as a nurse to have a close relationship with the patients, and it is always uplifting to see their improvement.

“I remember in what state they were taken to the Centre and when we meet again at the checkup six months later, it is really inspiring to see their improvement, it empowers me.”, he said.

He is also particularly fond of the modern style of the building and this is another reason among many others, why he loves going to work every day.